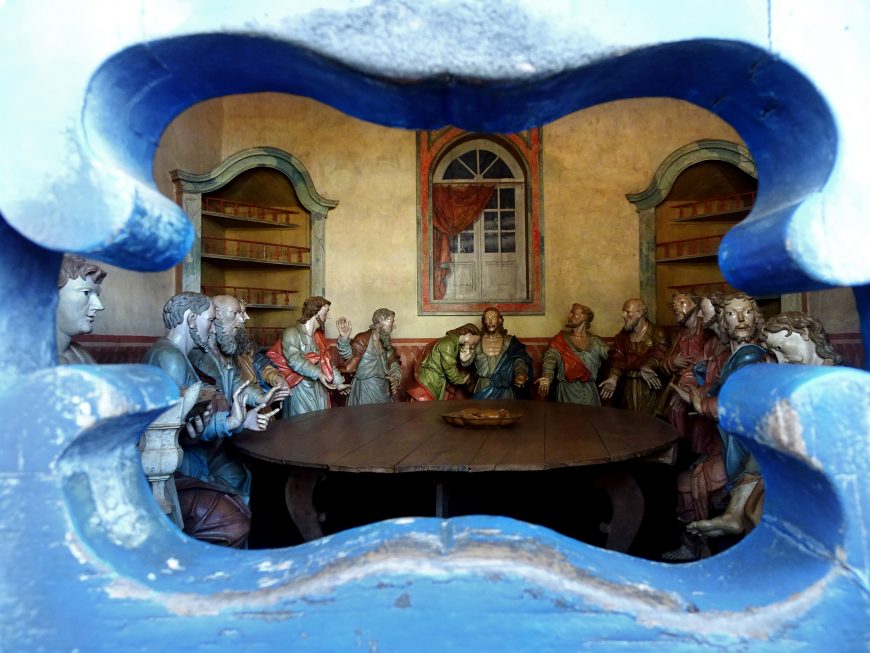 The Portuguese Colonization of Brazil

Now the largest country in South America and the fifth largest in the world, Brazil is not only impressive in size, but it is also geographically diverse with the Amazonian jungle at its center and the Atlantic Ocean at its east. This vast scale coupled with the region’s diversity caused Portuguese colonization of Brazil to occur in various stages, with regional interests shifting according to economic ones. While the coastal cities São Vicente (1532), Salvador (1549), and Rio de Janeiro (1565) were established early on, the viceroyalty of Brazil was not founded until 1763 when Rio de Janeiro replaced Salvador as the capital city.

The Portuguese colonization of Brazil was like that of Spanish Latin America, propelled by the scientific impetus to “discover” new territories, and aligned with a similar religious and economic agenda. Like the Spaniards, the Portuguese brutally exploited indigenous labor to produce sugar, tobacco, gold, and diamonds, while promoting a ferocious religious campaign in the name of Catholicism. 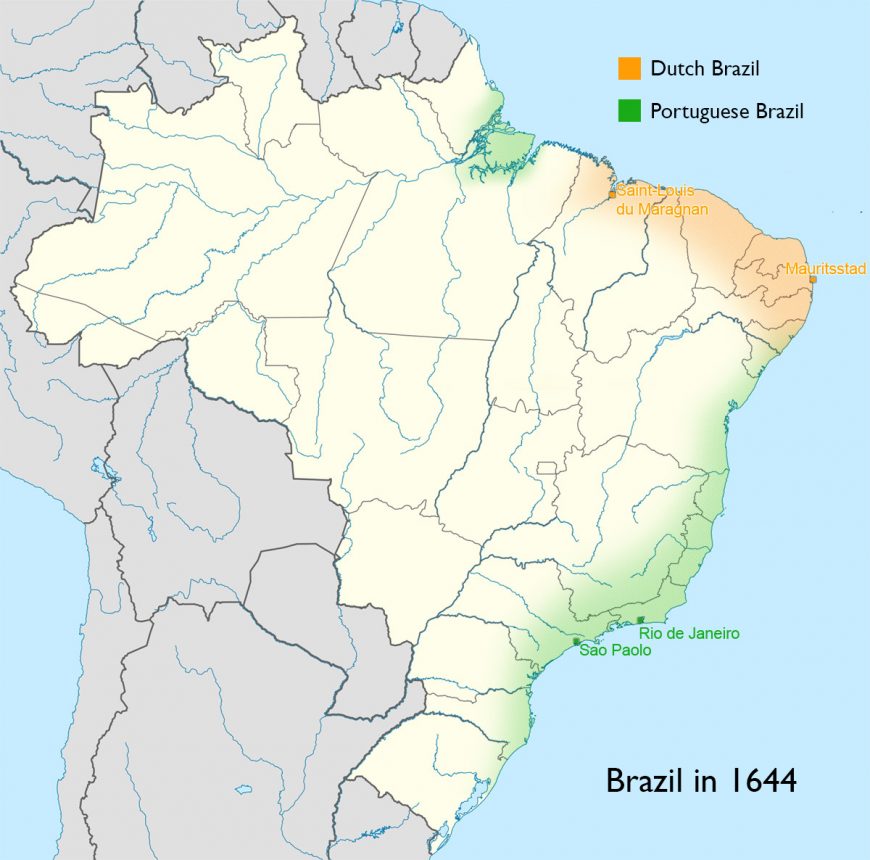 Different from Spain however, Portugal’s territorial holdings were also in Asia and Africa, making Brazil a considerable addition to their expanding empire (Portugal’s maritime explorers such as Bartolomeu Dias and Vasco da Gama reached territories as far east as Asia). As stated in the Treaty of Tordesillas (1494), which argued that Brazil was sufficiently to the East of the Tordesillas Meridian (and thus not interfering with any of the Spanish colonies to the West), Portugal made its claim for the colonization of Brazil in 1500. Soon after, Portugal began to bring abducted Africans to Brazil in order to supplement the labor of indigenous peoples, establishing a barbaric system of enslavement that would last for three and half centuries.

The Treaty of Tordesillas in 1494 divided colonial possessions around the world between Spain and Portugal. Everything to the west of the treaty line was property of Spain, and east of the line belonged to Portugal (map: Ultimadesigns, CC 0)

In 1498, da Gama became the first traveler to reach India by circling the southern cape of Africa, rather than by crossing the treacherous seas of the Mediterranean and Arabian Peninsula. This new maritime route gave Portugal control of the spice route and helped pave the way for the establishment of Portuguese cities in Asia, including Goa, India (1510) and Macau, China (1557). In 1500, Pedro Alvares Cabral ventured west under the impression that he too would reach India; however, like Christopher Columbus, Cabral arrived in Latin America instead.

Busy establishing trading posts throughout the empire, the Portuguese did not invest in building local institutions like the Spanish. The natural resources of Brazil, among them a type of wood known as pau brasil (hence the country name “Brazil”), attracted other European colonizers, particularly the Dutch, who successfully invaded parts of this Portuguese territory from 1630 to 1654; the French, who briefly colonized the area of Rio de Janeiro in the sixteenth century; and the Spanish, whose territorial holdings near the River of La Plata created additional border tensions. Interestingly however, the relationship between Portugal and Spain was not entirely competitive, since both countries, in an attempt to protect their territorial interests in Latin America, often sided against the British, Dutch, and French. The northeast of Brazil, and namely the cities of Salvador (in the state of Bahia), the seat of government from 1549 to 1763, and Recife (in the state of Pernambuco) were the sites of the slave market and sugar boom that characterized the early decades of Portuguese colonization. In the center of Brazil, the cities of Ouro Prêto (in the state of Minas Gerais) and Rio de Janeiro, the seat of government from 1763 to 1960, catered to the mining industry that flourished in the eighteenth century. The exportation of gold and diamonds reinvigorated the Viceroyalty of Brazil, whose wealth not only sustained colonial Brazil, but also the Portuguese Empire.

Dutch Colonization (1630–1654) and the Development of the Sugar Plantation

After the arrival of the Portuguese, the northeast of Brazil fell under Dutch control, beginning in 1630, when its capital city of Recife, renamed Mauritsstad, was established. The Dutch West India Company, who helped finance the Dutch colonization of Brazil, targeted this area for its natural resources, particularly for its abundance of sugarcane. Sugar, diamonds, and gold, each at different intervals, replaced the initial colonial interest in pau brasil.

By 1636, Johan Maurits van Nassau-Siegen had arrived in Dutch Brazil, also known as New Holland, as the first governor-general. Maurits modernized the city of Recife, establishing a zoological and botanical garden, and an astronomical observatory. He also had in his entourage Dutch painters like Frans Post and Albert Eckhout, who painted landscapes, still lives, and ethnographic images of the peoples and lands in Brazil. However, upon his return to Europe in 1644, the Dutch began to lose control of its Brazilian holdings, and by 1654, they had retreated entirely. In 1661, the Dutch and Portuguese signed the Treaty of The Hague officially putting an end to the Dutch colonization of Brazil. The allure of sugar, not just for the Dutch, but also for the Portuguese, Spanish, and British, gave way to the establishment and development of the sugar plantation, which based on its complex systems of mechanics, labor, and technology predated and in many ways anticipated both industrialization and capitalism. Particularly in tropical climates like those of the Caribbean coastal areas of South America and throughout the Caribbean, the sugar, tobacco, and coffee industry thrived as a result of the labor provided by enslaved people. These networks of production based on cruelty and violence are evidence of the destructive power of globalization on Amerindian and African societies during the development of Latin America. The Portuguese colonization of Latin America differed from that of their Spanish counterpart in terms of the artistic, urban, and cultural legacy. Colonial churches were typically not built in a rectangular plan, as was the case in Spanish Latin America, but rather according to a variety of shapes. In terms of architectural style, what we often call the Baroque took on a more dynamic and ornate interpretation, commonly known as the Brazilian Baroque and often times closer to what we typically characterize as the European Rococo. Even in terms of urban planning, cities like Salvador developed in a maze-like arrangement rather than on a grid. This was largely because cities were not conceived as part of a larger urbanization campaign, but rather as independent ports.

In comparison to Spanish America, the African legacy in colonial Brazil is particularly noteworthy, considering the prevalence and endurance of slavery until 1888. Between 1600 and 1850, 4.5 million enslaved Africans arrived in Brazil, versus 450,000 in North America.[1] This African heritage is present in the sculptural, architectural, and religious remnants of colonial Brazil, as well as in musical and performative traditions that still live on to this day, such as in the Afro-Brazilian dances of Samba and Capoeira, both of which originated in Salvador.

Read about the Sanctuary of Bom Jesus de Matosinhos of Congonhas do Campo, 1757-1872