Queen Elizabeth II sits with impeccable posture in the ornately decorated Drawing Room at Buckingham Palace. She is bathed in natural light streaming from an unseen window to the viewer’s right. Like earlier formal images of royals (for example, of Elizabeth I), it was created with the ideal purpose of reinforcing their power, authority, and personas as solid, devoted, and steadfast rulers.

Leibovitz places Queen Elizabeth II in an interior space that reveals hints of her character and everyday life—recalling the humanizing relatability of Queen Victoria and Prince Albert in Sir Edwin Landseer’s painting Windsor Castle in Modern Times. Leibovitz provides the viewer with the expected royal portrait of a single stately figure in full regalia, while also including incidental details that reveal more about the life of Queen Elizabeth II, despite the rigorously scheduled and heavily controlled nature of the photography session. Leibovitz’s choice to position Her Royal Majesty off-center departs from the conventions established by the Queen’s previous frequent photographer, Cecil Beaton. Examples of his royal portraits are now in the holdings of the Victoria and Albert Museum. In Beaton’s photographs, the Queen is always centered in the frame, and no members of her staff are visible in the portraits, only her family members. Leibovitz includes several of the Queen’s staff members in the background of her photograph (two figures in dark suits can be seen reflected in the mirrors), but because of her positioning in front of the mirror, we especially notice the woman on the left side of the frame.

The staffer and the queen 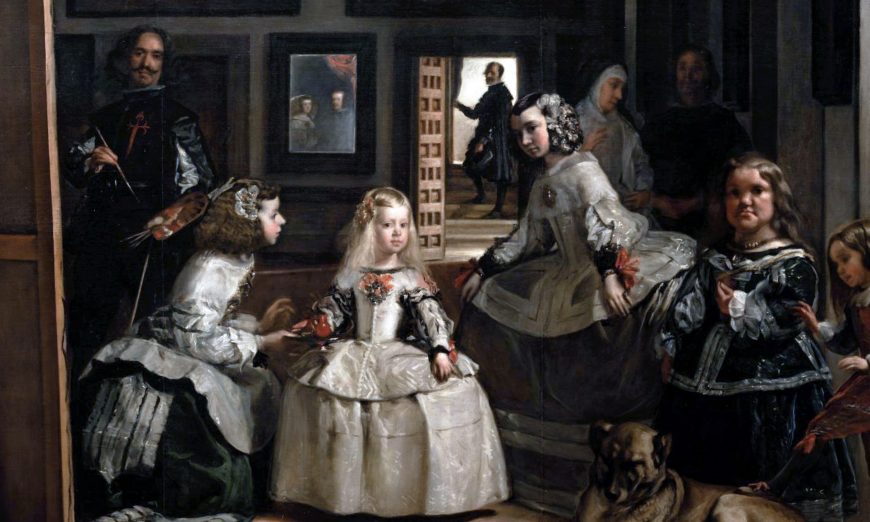 In Leibovitz’s portrait, a much smaller figure stands in the left edge of the frame by a large mirror in the back of the room. The woman is barely noticeable in the shadows—a reminder perhaps of the background figures in Diego Velásquez’s Las Meninas. This figure, likely a member of the Queen’s staff who is keeping close watch over the photo shoot, is positioned so close to the left edge of the photographic frame that she could have been easily cropped out (and was cropped out of the final version of the photograph that was published in Vanity Fair). [1] This leaves even more focus on the regalia-adorned queen, who is clearly the central figure, even if she is not centered in the frame in accordance with 16th-century royal portraiture conventions.

The staffer and the queen are a study in contrasts. The queen’s regalia attests to her elevated station, power, and importance, even if she appears small in the way Leibovitz has positioned and framed her in the enormous room. Even without the title of the photograph, many Englanders (as well as people living in about thirty-five other former British colonies) would know who she is because they see her face every time they pay for goods and services with cash or coins. Queen Elizabeth II’s visage has been reproduced so many times that she probably rivals the sitter of Leonardo da Vinci’s Mona Lisa for recognition. The woman in the background, though shadowed and far smaller in scale, echoes the main figure’s hairstyle (although her hair is dark), and her posture (although she is standing). Her gown is a plain, pale blue, rather than a resplendent pale gold brocade. The staffer’s face is similarly half-lit from the left, and she wears a similarly dignified expression—not quite a smile, but not a frown. The details of facial expressions of both women are nearly lost in the details of the room in which both are ensconced (and some might suggest, subsumed).

By royal standards, the room has a lived-in elegance, with its enormous patterned rug in warm colors, its brocade-upholstered chairs, side-chairs, and sofas offering a saucy mix of Queen Anne, understated Rococo, and Empire styles. All the furnishings, window treatments, chandeliers, and sconces are the inherited trappings of old wealth. The matriarch — the oldest serving British monarch in history—has lived in this house for her whole life, as has her family since inheriting it from the House of Hannover in 1901. She is the most prominent member of the House of Windsor—as everything about this picture tells us.

This picture was taken to commemorate Queen Elizabeth II’s official state visit to the United States in 2007. Leibovitz was selected by the Royal Household as the first U.S. photographer to capture her in an official portrait. Leibovitz, who began her career photographing for Rolling Stone magazine before moving to Vanity Fair, is best known for producing engaging celebrity portraits in intimate poses (including a pregnant, nude Demi Moore; Whoopi Goldberg in a bathtub of milk; a photograph of LeBron James with an arm around Gisele Bündchen that sparked conversations about racial stereotypes; and a semi-nude 15-year-old Miley Cyrus). She also captured an image of Beatle John Lennon with wife Yoko Ono five hours before he was murdered. Leibovitz is a designated “Living Legend” by the Library of Congress, an honor reserved for Americans who have offered significant creative contributions. [2]

Leibovitz and her team of eleven spent three weeks choosing the settings for four photographs of Queen Elizabeth II, and they were given just 30 minutes for the shoot. But because the queen’s elaborate regalia took too much time to don, Leibovitz had just 25 minutes to photograph her sitter, and the shoot was documented by the British Broadcasting Corporation (BBC) in the documentary A Year with the Queen/The British Royal Family at Work. [3] During the shoot, Leibovitz explained that she was so impressed that the Queen does her own hair and makeup, and remarked that she does both so beautifully. But Leibovitz then immediately had the audacity to suggest that the Queen take off her tiara, because it was “too dressy.” The Queen snapped back “Less dressy?! What do you think this is?!” One of the queen’s assistants patiently explained to the photographer that they cannot remove the tiara as it would mess up the Queen’s hair. Leibovitz, with equal patience, conceded that they could take a couple of photographs before removing the tiara, and the queen replied that she would have to “tidy her hair.”At that point, Leibovitz began giving her directions about where to look for the shot. [4] Leibovitz apparently won the battle because the BBC footage cuts to another location, where the Queen is seen posing without her robe and tiara.

Perhaps this tense interchange led Leibovitz to include the Queen’s patient servants in the fame, as if to point out that the queen, for all of her regal glory, is entirely dependent on her staff (a lineup that, for thirty minutes, included Leibovitz), to help maintain her public image, and thus, her power.