VA:Re.7.1.6a Identify and interpret works of art or design that reveal how people live around the world and what they value.

VA:Re9.1.5a Recognize differences in criteria used to evaluate works of art depending on styles, genres, and media as well as historical and cultural contexts. What is a masterpiece?

The word masterpiece has been used broadly to acknowledge human achievement for hundreds of years. The more precise usage of the term, however, has evolved over time. The first use of masterpiece is in the context of the guild system of medieval Europe. Craft guilds in particular, which represented the painters, sculptors, masons, metalsmiths, weavers, and other makers of the time, were the equivalent of our modern-day art schools, labor unions, and professional associations all combined into one. They created quality standards for production and established a strict process for training new “masters” of a given craft. Apprentices (beginners) trained first to become journeymen (itinerant laborers) and then, finally, masters with their own workshop. To attain the status of master, guilds required the production of a “masterpiece,” a creation that demonstrated a guild-approved level of skill and quality. During the medieval period, apprentices in a guild would be trained in the style of the master and an artisan’s masterpiece would need to reflect their ability to effectively mimic the master’s work. The concept of creative originality or improvement on the master’s style became accepted during the Renaissance. In this context, rather than reinforcing the accepted practices of a particular workshop, the word masterpiece took on new meaning. It began to imply a creation that sets an artist apart from others and indicates the artist’s exceptional artistry or technical capacity in a specific skill or medium. The publication of Giorgio Vasari’s The Lives of the Most Excellent Painters, Sculptors, and Architects in 1550 reinforced the idea that there was in fact a group of artists with such singular talents. This canon of artists included people such as Botticelli, Leonardo da Vinci, Raphael, and Michelangelo, who we still revere today as “old masters” and whose works we refer to as masterpieces. Similarly, in 1604, Karel Van Mander published The Book of Painters which identified the greatest painters of northern Europe, including Jan van Eyck, Rogier van der Weyden, and Albrecht Dürer. 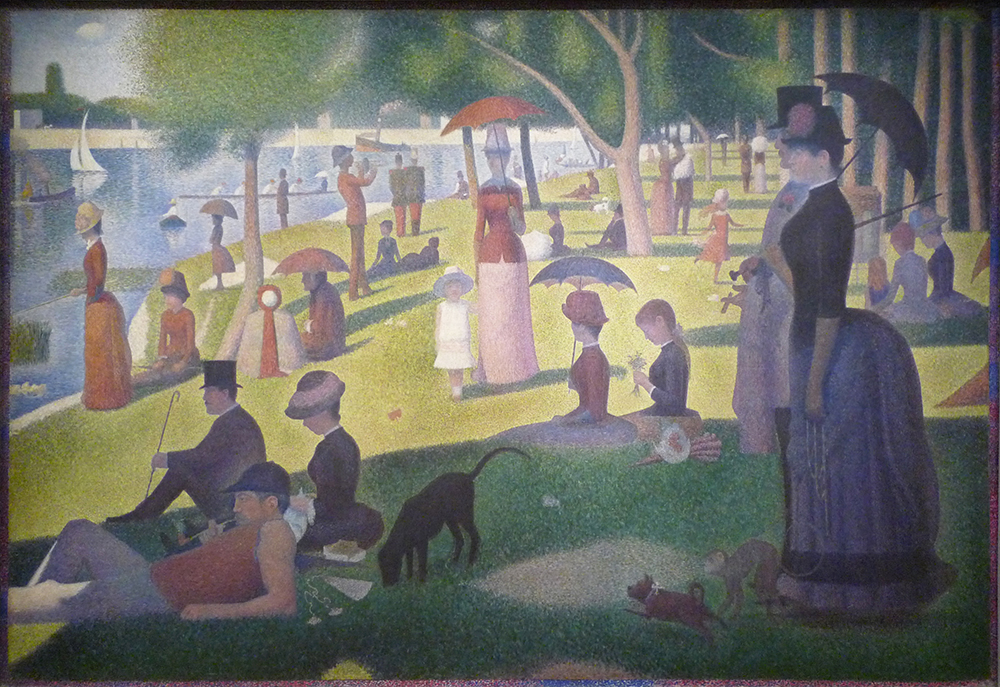 In time, the word masterpiece took on an additional meaning, to indicate that a particular creation was the best work by a particular artist. This status could also be referred to as someone’s magnum opus, or “great work.” For example, George Seurat’s A Sunday on La Grande Jatte–1884 is now considered to be his greatest accomplishment. These more recent uses of the term—setting an artwork apart from that of other artists or from other works by the same artist—largely frame the way the word masterpiece is applied to art today.

Fun fact: The word masterpiece is gendered, with master referring to a male artist or maker. Most artists in European art history were in fact male, but there were also numerous practicing and notable female artists. You might wonder, then, if there was a term to celebrate the achievements of women? Yes! While it has never taken hold to the same extent as masterpiece (a fact which speaks to long-standing power imbalances between genders), there is indeed a corresponding female version of the term. According to the Oxford English Dictionary, mistresspiece refers to “an outstanding example of female beauty or accomplishment.” As such, it has been used to indicate a woman of notable beauty, an excellent representation of a woman by an author or artist (male or female), or an exceptional achievement by a woman. What do you think about the word mistresspiece?

Who decides if something is a masterpiece?

With any of the definitions of the term masterpiece comes the need for standards and an understanding of who sets and enforces the standards. Essentially, someone has to decide which features equate to quality and what distinguishes a work as being of the highest quality, worthy of the term masterpiece. In the guild system, this was accomplished by the guildmasters themselves. In the Renaissance and early modern period, art patrons and then state-sponsored art academies and exhibitions along with an open commercial art market stepped in to become the arbiters of quality and achievement. For example, in the 17th-century Dutch Republic, Rembrandt van Rijn used self-portraiture to prove his “superlative ability” to potential clients. Today, the art market, which includes commercial galleries, museums, and even celebrity collectors and social media influencers, holds substantial sway in these matters. And, of course, the research practices and findings of art historians can also influence which artists or artworks receive more or less praise and attention.

Not surprisingly, standards can, and did, change over time, as tastes, interests, and power dynamics changed in society and in the art world. This means that some artworks could acquire or lose the status of masterpiece when evaluated by tastemakers in different eras. When first submitted for public display, in the International Exhibition of Fine Arts at the Centennial Exposition in Philadelphia in 1876, Thomas Eakins’ Portrait of Dr. Samuel D. Gross (The Gross Clinic) was rejected for being too alarming to look at. However, by 1893, when submitted to the art exhibition at the World’s Columbian Exposition in Chicago, the painting was accepted and celebrated with an award. Similarly, although heralded today as Seurat’s greatest masterpiece, A Sunday on La Grande Jatte–1884 was ridiculed when first displayed in Paris, mocked with the words “bedlam,” “scandal,” and “hilarity.” It took over 3 decades for Seurat’s artistic insights and innovations to be recognized by critics and collectors. How do we recognize and celebrate artistic achievement in a global context?

You may have noticed that this entire history so far stems from western Europe and the United States and is dominated largely by men and the art forms of painting, sculpture, and architecture. You may be wondering if and how artistic achievements have been recognized in other contexts. And, more precisely, what are the culturally-specific terms and standards that we can more appropriately apply when considering works of art from around the globe on display in European and American museums today? What assumptions are we making about what is great art, worthy of our time and attention, and why? Thankfully, museums, scholars, artists, and art consumers and participants have been asking these same questions.

The Masterpiece Moments videos provide some initial insights for our consideration. For instance, the 10th-century Chinese figure of Guanyin at the Denver Art Museum is lauded for the sensitivity and gracefulness of the carving, and its sustained ability to inspire viewers over time. The artist’s skill in rendering pose and expression highlight the role of Buddhist belief in China and Guanyin’s ability to listen and extend compassion to devotees. As such, the spiritual efficacy of the sculpture is essential in identifying it as a masterpiece.

In the case of European and American artists, we are seeing an increased recognition of artworks that have often been undervalued or understudied because of an artist’s race or training. William T. William’s Trane is an extraordinary exploration of abstraction in African American art and music, and exemplifies his work of the 1960s and 1970s, which substantially impacted the broader field of abstract art. Allan Houser’s Earth Song epitomizes the evolution of a distinctive tradition of contemporary Native American sculpture that is in dialogue with but not inferior to European sculpture. And, Thornton Dial’s Crossing Waters reflects the capacity for self-taught artists to create deeply resonant works with non-traditional materials and techniques. Artists themselves have weighed in on these same questions, in ways that can further challenge our thinking about the concept of a masterpiece. Kerry James Marshall explores the terms mastery and masterpiece as part of a codified system of artmaking which originated in Europe. Specifically, he is interested in how he, as a Black artist, responds to and inserts himself into the highly revered history of painting since the Renaissance. With Comedian, a banana duct-taped to a wall (or at least the concept of such), Italian artist Maurizio Cattelan offers a critique on the contemporary art world. He uses humor to pass commentary on how and what we celebrate as great art, and how such practices translate to monetary value.

Clearly the characteristics of a masterpiece and even the practice of designating artworks as such are topics that have continuously stimulated debate in the art world. As makers, scholars, and consumers of art, you too can join the conversation. Choose one or more of the discussion questions and prompts below to get started.

After reading this essay, make sure to watch at least 2 or 3 Masterpiece Moment videos of your choice before moving onto discussion.

For further insight on the evolving definition of the word masterpiece and the challenges we face in using the term today, watch the video, “What Makes a Masterpiece?”, from the PBS Art Assignment series.