Dig deeper with other short courses! Patrons mattered during the renaissance. Find out why. From granary to—church? Once open to the city, this building and its niches blend the spiritual with the everyday. When the citizens of Florence looked up at St. Mark, they saw a mirror of their own dignity—and of ancient nobility. 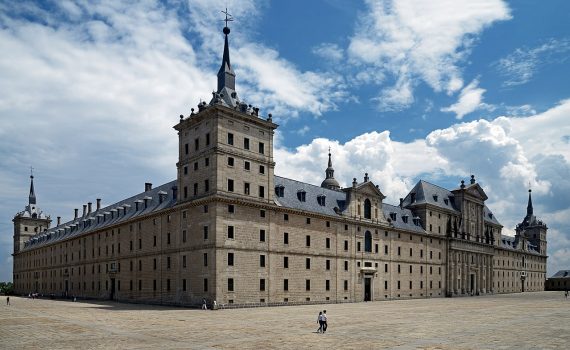 The severe exterior of this palace complex belies its highly decorative interior, once filled with art. Many, many panels made up this massive altarpiece. Dedicated to Mary, it stood in the crossing of Siena Cathedral. Ambrogio Lorenzetti, Allegory and Effects of Good and Bad Government

Things get ugly when tyrants take over! But with peace, fortitude, and prudence, Siena prospers—an urban paradise. The opulence! The abundance! Take a look at those gold spurs—or that night scene, one of the first in art history. Claus Sluter (with Claus de Werwe), The Well of Moses

Grieving angels and individualized prophets once inspired prayers at this well-funded Carthusian monastery. The calendar pages of this sumptuous prayer book depict seasonal life. Above it all, constellations help mark time. 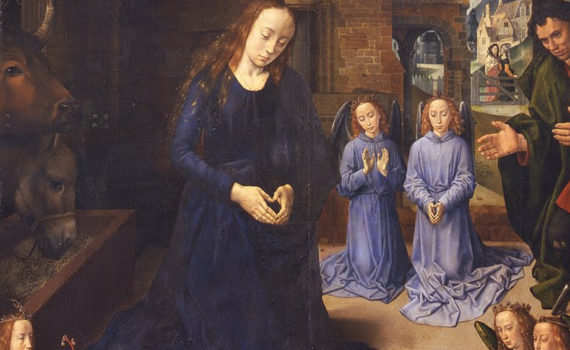 This particular artwork perfectly embodies all the things that northern European painters were thought to do best. Two years before the Spanish expel the Jews and begin their invasion of the Americas, an artist paints an image of redemption. In history classes, we often hear about renaissance men: Cosimo de’ Medici, Leonardo da Vinci, and Niccolò Machiavelli. Where were the women? Gil de Siloé, The Tomb of Juan II of Castile and Isabel of Portugal

If you suddenly found yourself the heir to a royal throne, what steps would you take to advertise that you are indeed the rightful inheritor? A miraculous appearance for a queen: Juan de Flandes, Christ appearing to his mother

a Flemish painter in the court of a Spanish queen What’s in it for me?

Why would someone patronize art in the renaissance? Giovanni Rucellai, a major patron of art and architecture in fifteenth-century Florence, paid Leon Battista Alberti to construct the Palazzo Rucellai and the façade of Santa Maria Novella, both high–profile and extremely costly undertakings. In his personal memoir, he talks about his motivations for these and other commissions, noting that “All the above-mentioned things have given and give me the greatest satisfaction and pleasure, because in part they serve the honor of God as well as the honor of the city and the commemoration of myself.” [1] Aside from bringing honor to one’s faith, city, and self, patronizing art was also fun. Earning and spending money felt good, especially the spending part. As Rucellai goes on, “I really think that it is even more pleasurable to spend than to earn….” [2]

The ancient Roman world (with which much of renaissance Europe was endlessly fascinated) also provided motivation for patronage. The liberal expenditure on art and architecture by ancient Roman patricians was celebrated in the literature of antiquity and survived—even if in fragmentary form—to dazzle the eyes of renaissance viewers. The Roman Emperor Augustus, who so famously said that he found Rome a city of brick and transformed it into a city of marble, provided the ultimate noble model of patronage. Commissioning an artwork often meant giving detailed directions to the artist, even what to include in the work, and this helped patrons fashion their identities. While the identity of Bronzino’s Florentine sitter in a Portrait of a Young Man is unknown, the artist shows him standing confidently in the composition’s center, looking out at us while dressed in expensive black satin, slashed sleeves, and a codpiece complete with golden aglets. He holds his fingers between the pages of a poetry book, which rests atop a table carved with grotesque faces. The book and the table were undoubtedly intended to convey the man’s sophistication and learning while his clothing and upright posture showed his wealth and nobility. The renaissance was also a time when increasingly wealthy middle-class merchants and others aspired to increase their social recognition and began to commission portraits, as we see in double portraits like Jan van Eyck’s The Arnolfini Portrait showing the Italian merchant Giovanni de Nicolao di Arnolfini with his wife in Bruges (in present-day Belgium). Petrus Christus’s Portrait of a Carthusian reveals the increasing prominence of religious figures, with clergy, monks, and nuns sitting for portraits, many of which were likely made to celebrate the entry of wealthy individuals into religious orders. In a seventeenth-century fresco by the artist Ottavio Vannini, Michelangelo, the artist, is shown presenting the powerful Florentine, Lorenzo the Magnificent de’ Medici, with a sculpture of a faun. Lorenzo sits at the center of the image, facing frontally like a ruler, while Michelangelo stands off to the side, bowing respectfully towards him. While today the name Michelangelo is better known, in the fresco the Medici patron is shown as more important than the artist.

Paying for something lavish and monumental, such as Sant’Andrea in Mantua (commissioned by Ludovico Gonzaga, ruler of the Italian city-state of Mantua and built by Alberti) or El Escorial (commissioned by Philip II, King of Spain, outside of Madrid), was a powerful statement about a patron’s wealth and status. Philip II was deeply involved in the planning of the massive complex that became El Escorial (a monastery, palace, and church). The complex was built in an austere, classicizing style that was intended to showcase Philip’s imperial power by looking to ancient Roman architectural forms.

Some patrons paid for art to serve a larger purpose, perhaps to fulfill a devotional or religious need, as the Isenheim Altarpiece did for people suffering from the painful disease of ergotism. Others commissioned art to expiate the patron’s sins for such things as usury, as Jodocus Vijd desired when he paid a large sum of money for the Ghent Altarpiece.

Commissioning artworks also helped to inspire civic responsibility or to demonstrate that members of a particular community performed their duties properly. The Scuola Grande di San Giovanni Evangelista, one of many Venetian devotional confraternities, paid Gentile Bellini to depict the procession of the relic of the True Cross through St. Mark’s square. This commission highlights the importance of the miraculous object as well as the civic duty of the city’s citizens, who are shown in the painting’s foreground, with the Scuola members carrying a canopy above the relic. Patrons often had themselves incorporated into paintings and sculptures to remind viewers of who had paid for the work of art as well as to show themselves participating in the narrative. We call these “donor portraits.” Lluis Dalmau’s Virgin of the Councillors, for instance, shows the Virgin Mary enthroned, holding the baby Jesus and surrounded by saints in a luxurious Gothic interior. Kneeling before the saints, at the edge of the throne, are five men, all of whom were members of the Barcelona City Council (Casa de la Ciutat), who had paid Dalmau to create the painting to hang in the chapel at the council palace. The portrait collapses sacred and secular time, placing the men as perpetually revering Mary and showcasing their piety to anyone observing the painting.

Even in instances where patrons were not overtly depicted in artworks, artists would sometimes be directed to include heraldic symbols, visual puns, or other motifs to allude to the patron. The coat of arms of the wealthy Mendoza family rests above main entrance to the Palacio del Infantado (in Guadalajara, Spain) amidst the decorative plateresque elements, and advertising to any passersby who had paid for and lived in the striking palace. The Tomb of Juan II of Castile and Isabel of Portugal in front of the altar of the church of the Carthusian Monastery of Miraflores (photo: Ecelan, CC BY-SA 4.0)

Patrons also set fashions for style and subject matter. Importing artists and artworks from distant lands could show off one’s sophistication and introduce new styles, techniques, and subjects to local audiences. Artists and art traveled widely during this period, and exchanges across Europe and beyond were common. Because of the wealth and glamour of northern European court culture, it was fashionable for the wealthy elite of Italy and Spain to import both Netherlandish art and artists. Queen Isabel of Castile, whose father had favored Flemish painters such as Rogier van der Weyden, had a number of artists, including Juan de Flandes, Michel Sittow, and Gil de Siloe, at her court to create lavish works that would speak to her power and magnificence.

Likewise, Tomasso Portinari, who worked for the Medici bank in Bruges, hired the northern artist Hugo van der Goes to paint a massive altarpiece of the Nativity for his home town of Florence, Italy. When put on display in the hospital church of Santa Maria Nuova in 1483, it created a sensation. Italian artists, in awe of the accomplishments of the northern master, quickly responded to what they saw. Portinari not only showcased his own cosmopolitan sophistication, he also helped shape the direction of Florentine art by introducing this spectacular image to local artists.

Art communicated ideas about patrons. Status, wealth, social, and religious identities all played out across paintings, prints, sculptures, and buildings. At the same time, the careers of artists were shaped with the aid of powerful patrons. Likewise, artistic styles emerged or developed as a result of patrons hiring artists or buying artworks and by transporting them to new locations. The history of art has been shaped not only by artists, but also by the patrons whose choices in sponsorship determined what art was created, who created it, who saw it, and what art was made of. Until the modern era, the stories that have been told in art are the stories that reflect the interests of the rich and powerful, the privileged few—mostly men—who were in positions to patronize art.  In a nutshell, patronage mattered.

Read more about Isabella d’Este and her patronage