Learn more beyond the Aztecs . . .

Dig deeper with videos and essays The Spanish destroyed the main Aztec temple: an expression of spiritual and political conquest. This goddess has clawed feet, and wears a necklace of body parts and the snake-skirt from which she takes her name. This vessel represents the goggle-eyed deity associated with rain and crops, critical for the agricultural Aztecs. The Sun Stone (or The Calendar Stone)

So ubiquitous that it has been used on currency, this unfinished stone records Aztec history and a future prophecy. Capable of being male or female, the Earth Lord Tlaltecuhtli is shown here as a woman who has given birth. Although viewership changed, the Aztecs’ painted language did not cease with Spanish intervention.

“The Aztecs, an introduction” 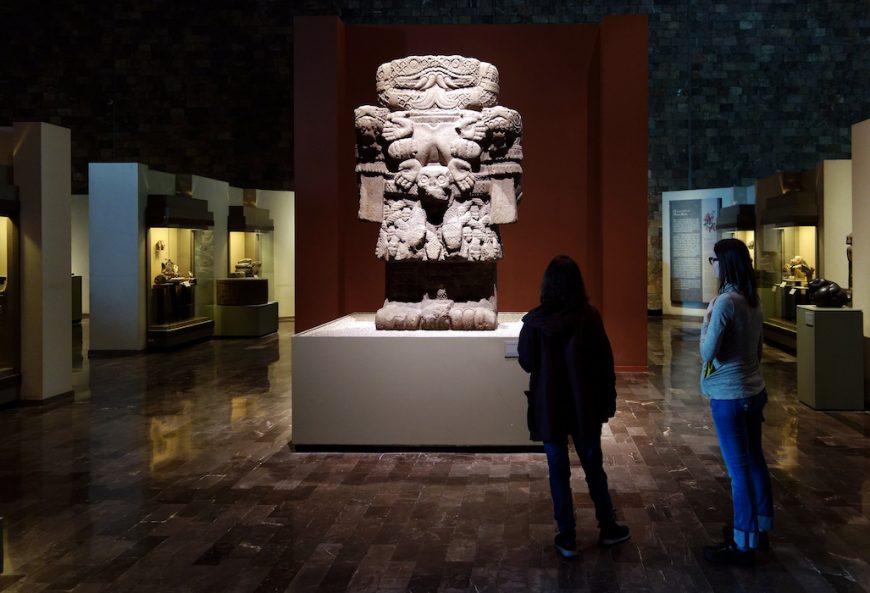 If you travel to Mexico City today, chances are you might visit museums such as the Templo Mayor Museum in the heart of the city or the National Museum of Anthropology in Chapultepec Park. Either is sure to dazzle you with an impressive array of exquisitely crafted objects (that we typically label as “artworks”), ranging from monumental stone sculptures and shell mosaics to colorfully painted ceramics and figurines. At both museums, Aztec art is the centerpiece: excavations at the Aztec Templo Mayor fill the onsite museum, and Aztec art similarly occupies the central galleries within the Anthropology museum. The Aztecs were only one group that made up the diverse indigenous peoples of Mesoamerica, but they were among those groups that encountered Europeans when they arrived in the Americas. Collections like those at the Templo Mayor museum or National Museum of Anthropology attest to the skill and creativity of Aztec artists. The German explorer and scientist Alexander von Humboldt arrived in Mexico in 1803 after traveling throughout parts of Latin America. Impressed by what he experienced and saw in Mexico City, he became interested in the country’s indigenous past (the country was then still New Spain). He wrote about the Aztecs and created illustrations of their sculptures. In 1810, he used the name “Aztecs” to describe the powerful Mesoamerican people who had built a vast empire in Mexico and who encountered the Spaniards in 1519. He adapted the name Aztec from the Nahua word Aztlan, which referred to their mythical homeland. Several decades later, the historian William H. Prescott popularized the term, and it is still common today.

But what did the Aztecs call themselves? They referred to themselves as the Mexica. Those who lived in their capital city, Tenochtitlan, were the Tenochca-Mexica. The Mexica formed part of a larger ethnic group known as the Nahua, who spoke Nahuatl. Unfamiliar with this language? You might know a few words: chocolate, chipotle, coyote, tomato, and avocado derive from Nahuatl words. Even the name Mexico, adopted after Mexicans gained independence from Spain in 1821, comes from Mexica. Where did the Mexica come from? Huitzilopochtli carried on the back of a person, Boturini Codex, c. 1530-41, detail of folio 4 (Museo Nacional de Antropología, Mexico City)

Several myths describe the migration of the Mexica from Aztlan, thought to be somewhere in northern Mexico or the southwestern United States. The Mexica departed Chicomoztoc at the urging of their patron deity, Huitzilopochtli, to journey to establish a new settlement.

Early colonial codices (books), like the Codex Boturini, show this migration, with footprints indicating the direction the ancestors walked on their journey. In this particular codex, we even see Huitzilopochtli carried on the back of one of the individuals migrating, alluding to his role in the migration.

Huitzilopochtli told the Mexica to look for a sign—an eagle on a cactus—that would tell them where to settle. Their migration led them to the Valley of Mexico. They were generally disliked by other groups who found the Mexica uncivilized or unrefined, largely because they were foreigners who worked initially as mercenaries for other people living around Lake Texcoco. The flag of Mexico with an eagle perched atop a cactus (source: Alex Covarrubias, CC0)

According to Mexica mytho-historical textual sources (written down in the early colonial period), they finally witnessed the sign on an island in the middle of Lake Texcoco in the year 1325. It was there that they established Tenochtitlan, their capital city. They connected the city to the mainland with causeways to make coming and going to the city more efficient. If you look at the Mexican flag today, you will see a reference to this origin story. In the center of the flag an eagle is represented  on a cactus, and the eagle stands on a glyph for stone and water.

As they developed their city and gained more prominence in the Valley of Mexico, the Mexica formed an alliance with Texcoco (Tetzcoco) and Tlacopan (today, Tacuba), known as the Triple Alliance. Really, when we refer to the “Aztecs,” we are talking about the people who formed this alliance. War was common in the Aztec empire. There were two main types of wars: one was primarily for conquest and expansion of the empire, while the other involved a more ritualized form of battle, called “flowery wars.” The flowery wars may have served several functions, including training soldiers, capturing individuals for sacrifice, or weakening enemies.

The Triple Alliance had a large and powerful military that conquered many peoples throughout Mesoamerica. Tribute was gathered from those the Alliance controlled, and we can see a record of this in the mid-sixteenth-century Codex Mendoza. Tribute lists show what items, like bird feathers, greenstone or jade, and textiles, that peoples controlled by the Mexica sent back to Tenochtitlan.

Uprisings against Aztec control were common, meaning that armed conflicts occurred with regularity. Many of these conquered peoples, or even those who successfully managed to maintain independence but still disliked the Aztecs, joined with Hernan Cortés’s army when he journeyed towards Tenochtitlan in 1519.

The Mexica ruler was known as the huey tlatoani (“chief speaker”; pronunciation: whey-tla-toe-anee). There were eleven tlatoque (the plural form of tlatoani) of Tenochtitlan, beginning with Acamapichtli in 1375 and ending with Cuauhtemoc in 1525. The huey tlatoani was tasked with maintaining the city, participating in important rituals, and overseeing the military. They lived in large, sumptuous palaces. Moteuczoma II Xocoyotzin’s palace had rooms for living quarters, meetings, and storage, but also had gardens, a zoo, and even an aviary. The colonial Florentine Codex describes the zoo as having “ocelots, bears, mountain lions, and mountain cats… eagles… and various birds.” The royal palaces bordered the most important location in the capital—the sacred precinct—which was thought to symbolize the navel of the universe, or axis mundi. Tenochtitlan was a bustling city, with more than 100,000 people living in it. Food and water were of great concern, especially because the city was located on an island in a lake. Chinampas, or floating gardens, provided the food necessary to sustain the Aztec empire. They consisted of human-made islands where crops could be grown. Food staples included maize, squash, and beans. Some chinampas were even used to grow flowers exclusively. If you visit Xochimilco today, you can get a sense of what chinampas look like, with people still navigating canals amidst floating gardens. Large aqueducts brought fresh water to the capital. These massive engineering projects were supported by the huey tlatoani because they were critical to the survival of his people.

A complex pantheon of deities

The Mexica had numerous deities in their religious pantheon. The two most important deities were Huitzilopochtli and Tlaloc, a rain and agricultural god. Their significance was symbolized by the twin temples atop the Templo Mayor in the center of Tenochtitlan.

Placed within the heart of the sacred precinct, the Templo Mayor was the largest and most important temple in the empire. One side symbolized Tlaloc, and included objects, symbols, and colors (like blue-green) associated with the rain god. The other side symbolized Huitzilopochtli, and similarly used a variety of means to convey his warrior and solar associations. Together, Tlaloc and Huitzilopochtli communicated the Mexica focus on warfare. Fire and water, known in Nahuatl as atl-tlachinolli (“burnt water”; pronunciation: at-ul tlach-ee-no-lee), symbolized war, which was essential to the expansion of the Mexica empire. Diego Durán, illustration of the Templo Mayor with the twin temples of Tlaloc (left) and Huitzilopochtli (right), from The History of the Indies of New Spain, 1579 (Biblioteca Nacional, Madrid) These festivals often included music, dancing, offerings, and sacrifice (whether self-sacrifice or human sacrifice). For instance, the eleventh month had the festival of Ochpaniztli (“sweeping of the roads”), which occurred sometime between August to September (or September to October by some accounts), and was intended to celebrate the fall harvest. It honored the earth goddess(es) Tlazolteotl and Toci, and involved sweeping. Sweeping here related literally to cleaning, but also symbolically to fertility, because Tlazolteotl was a goddess associated with filth, but also childbirth. She was a patron of midwives and adulterers. Aztec artists worked in a number of different media, from monumental stone sculptures, terracotta sculptures, and murals to codices, featherworks, and mosaics. Stone sculptures like Coatlicue (top of the page) demonstrate the expertise and skill of stone carvers. The sculpture is over-life size, and is carved from a single stone. The patterning on the serpents that form her skirt replicate actual serpent skin. The combination of naturalistic elements paired with more abstract ones is characteristic of Aztec art in general.

The Aztecs were also interested in the arts of earlier cultures, and would bring objects back to Tenochtitlan where they might be buried as part of offerings. At the Templo Mayor, for instance, we find Olmec masks dating to more than a thousand years earlier that were reburied in ritual offerings at the main Aztec temple. Some Aztec art is intentionally archaizing, or fashioned to look like older “archaic” art like that found at Teotihuacan. Aztecs used picture-writing rather than an alphabetic script like the one you are reading here. A combination of glyphs and images made up this form of writing. For instance, the image of a hill designated a place, and a specific image accompanying the symbol for hill designated the specific place. Chapultepec, for example, would include a hill (tepetl) and a grasshopper (chapolin). A scroll placed in front of someone’s mouth indicated talking or speech (in Nahuatl, this is called tlatolli). The huey tlatoani Motecuzoma Ilhuicamina’s name means “arrow piercing sky,” and his name glyph shows an arrow piercing the sky.

The Aztec empire crumbled after the defeat of Tenochtitlan in 1521. Cortés and his men, along with thousands of indigenous allies who despised the Aztecs, eventually defeated them after cutting off their water supply. People in the capital city fell sick largely because they lacked immunity to European diseases, and their military forces were weakened.

Aztec culture did not disappear, however. Mesoamerican traditions and art continued into what we call the colonial or viceregal era. Even though some forms disappeared, others were transformed, and still others continued unchanged.

Ongoing excavations in and around Mexico City continue to alter our understanding of this diverse and fascinating culture as they reveal more Mexica art and architecture. Recent excavations near the Templo Mayor uncovered the largest Aztec monolith to date, called the Tlaltecuhtli Monolith. It is believed that this monolith may mark the spot of a huey tlatoani’s tomb, and some of the items discovered underneath this monolith are helping us to rewrite what we know about Aztec culture and art.