Mecca and the Ka’ba

One of the five pillars of Islam central to Muslim belief, Hajj is the pilgrimage to Mecca that every Muslim must make at least once in their lifetime if they are able; it is the most spiritual event that a Muslim experiences, observing rituals in the most sacred places in the Islamic world. Mecca is the birthplace of the Prophet Muhammad. The sanctuary there with the Ka‘ba is the holiest site in Islam. As such, it is a deeply spiritual destination for Muslims all over the world; it is the heart of Islam.

At the heart of the sanctuary at Mecca lies the Ka’ba, the cube-shaped building that Muslims believe was built by Abraham and his son Ishmael. It was in Mecca that the Prophet Muhammad received the first revelations in the early 7th century. Therefore the city has long been viewed as a spiritual centre and the heart of Islam. The rituals involved with Hajj have remained unchanged since its beginning, and it continues to be a powerful religious undertaking which draws Muslims together from all over the world, irrespective of nationality or sect.

Even before Islam, Mecca was an important site of pilgrimage for the Arab tribes of north and central Arabia. Although they believed in many deities, they came once a year to worship Allah at Mecca. During this sacred month, violence was forbidden within Mecca, allowing trade to flourish. As a result, Mecca became an important commercial centre. The revelation of Islam to the Prophet Muhammad (d. 632) restored the ancient religion of the One God to the Arab people and transformed Mecca into the holiest city in the Islamic world.

Hajj involves a series of rituals that take place in and around Mecca over a period of five to six days. The first of these is tawaf in which pilgrims walk around the Ka‘ba seven times in an anti-clockwise direction. Muslims believe that the rituals of Hajj have their origin in the time of the prophet Ibrahim (Abraham). Muhammad led the Hajj himself in 632, the year of his death. The Hajj now attracts about three million pilgrims every year from across the world. 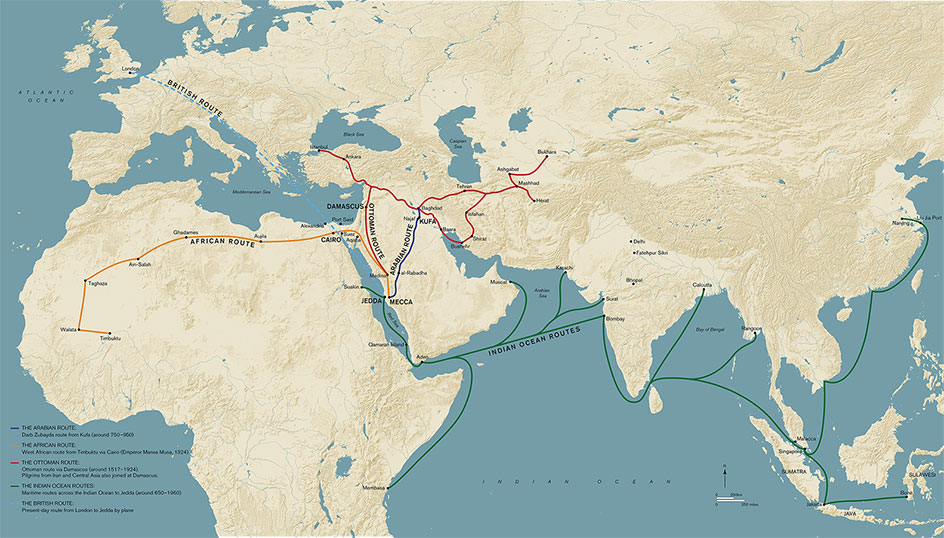 From the furthest reaches of the Islamic world, pilgrims have made the spiritual journey that is the ambition of a lifetime. As Hajj needs to be performed at a designated time, historically pilgrims moved together in convoys. In the past the journey could be extremely dangerous. Pilgrims often fell ill or were robbed on the way and became destitute. However, pilgrims do not fear dying on Hajj. It is believed that those who die on Hajj will go to heaven with their sins erased. Today, pilgrims can get on an airplane to reach Saudi Arabia, making the journey in contrast with the past quick and less arduous.

The Qur’an states that Hajj should take place “in the specified months,” and these are the last three months of the Muslim calendar, known as Miqat Zamani (fixed times). Although the main acts of the Hajj take place in five days during the twelfth month, a pilgrim can start going into consecration (ihram) for Hajj earlier, from the beginning of the tenth month (Shawwal). The Muslim calendar is lunar, which means that the Hajj takes place progressively across all four seasons over time rather than in the full heat of summer every year. On foot, by camel, boat, train or airplane, going on Hajj is a spiritual endeavor that begins at home and culminates in Mecca; in going, arriving, and returning, the pilgrim is mindful of the magnitude of the journey and the reward in this world and the hereafter.

When pilgrims undertake the Hajj journey, they follow in the footsteps of millions before them. Nowadays hundreds of thousands of believers from over 70 nations arrive in Mecca in the Kingdom of Saudi Arabia by road, sea and air every year, completing a journey faster and in some ways less arduous than it often was in the past. Those traveling overland by camel and on foot congregated at three central points: Kufa (Iraq), Damascus (Syria) and Cairo (Egypt). Pilgrims coming by sea would enter Arabia at the port of Jedda.