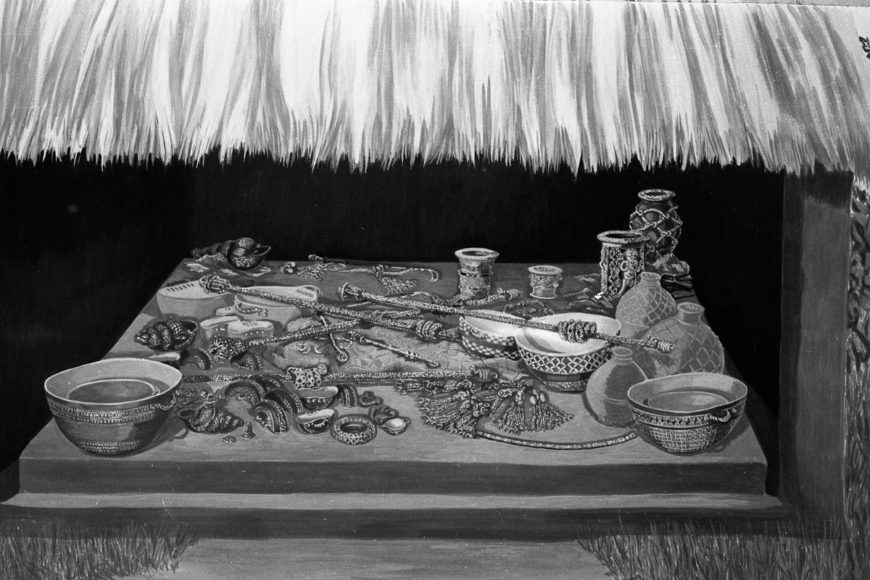 In 1938, while digging a cistern on his property, Nigerian farmer Isaiah Anozie unearthed dozens of intricate objects made of cast bronze. As it turns out, Isaiah’s family farm sat atop the remains of an ancient ceremonial center that was home to a society that existed over a millennium ago. Isaiah’s discovery initiated one of the most significant archaeological finds in the history of Nigeria and ultimately changed the way in which scholars understand the timeline of art and trade in West Africa. Over the next two decades, hundreds more bronze objects would be discovered, along with thousands of glass beads, numerous pieces of ceremonial pottery, and even the remains of an elite burial. These archaeological sites were evidence of an advanced and wealthy society that flourished in the Lower Niger region of modern-day Nigeria during the 9th to 11th centuries C.E. Named for the village in which the remains were discovered, the ancient culture of Igbo-Ukwu (meaning “Great Igbo”) left behind a rich record of visual art with impeccable craftsmanship and complex symbolism. It is possible that the ancient culture of Igbo-Ukwu represents the ancestral legacy of the Igbo/Ibo people, one of Nigeria’s largest ethnic groups.

In 1959, British and Nigerian government officials negotiated the first professional archaeological excavation of the site that was uncovered by Isaiah Anozie. British archaeologist Thurston Shaw spent five years in Nigeria overseeing the excavation. Ultimately, Shaw uncovered three sites on the Anozie family property, and he named them after the Anozie brothers: “Igbo Isaiah,” “Igbo Richard”, and “Igbo Jonah.” Each site offers clues about the ancient society of Igbo-Ukwu. In Igbo Isaiah (top of page), Shaw found a repository of elaborate cast bronze objects that included ceremonial vessels, pot stands, jewelry, and various ornamental regalia. Igbo Richard contained evidence of an elite burial for an individual of great political, religious, or social status (or perhaps all three). Accompanying the human remains in Igbo Richard, Shaw found over 100,000 glass beads, preserved textiles, elephant tusks, and cast bronze regalia. Finally, Igbo Jonah, which possibly served as a disposal pit, preserved a number of ceramic shards, additional bronze objects, and more glass beads. These discoveries confirm that the people of Igbo-Ukwu had considerable material wealth and likely participated in significant trade, both local and from afar. The bronzes from Igbo-Ukwu have garnered much attention from scholars due to their intricate designs and symbolism as well as the technical virtuosity required to create them.

Many of the bronze objects uncovered at Igbo-Ukwu are skeuomorphic, including the Vase with Rope. In this object, the artist skillfully imitated the appearance of a slender ceramic vase, decorated with relief designs and surrounded by delicately knotted rope. To achieve this effect, the artist seamlessly combined as many as eight separate castings. Braided bands of relief on the body and swirling designs at the foot of the vase disguise some of the points at which the castings were joined together. The vase stands just over a foot tall, and the artist transformed a seemingly utilitarian object into something that may have had great ceremonial significance, though its exact meaning and use remain unknown. In the Shell Vessel with Leopard, we can observe in even greater detail the tremendous skill of artists from Igbo-Ukwu and ascertain clues about the symbolic significance of the bronze imagery. Here, we see a spiraling conch shell surmounted by a stylized leopard. Both shell and leopard are encrusted with highly detailed low-relief decoration, comprised of concentric circles, parallel bands, and geometric millegrain designs. While many bronze objects from Igbo-Ukwo appear to have been made using the familiar lost-wax casting technique, some scholars have suggested that Igbo-Ukwu artists used a unique variation of the technique to create the finely detailed low-relief decorations, like those we see on the Shell Vessel with Leopard. In this variation, artists possibly used latex instead of beeswax to create the forms that would be  cast—a change in material that granted them the ability to achieve much finer details in the finished casting.

Other objects discovered at Igbo-Ukwu include leopard imagery, suggesting a possible symbolic significance attached to such images. In fact, some scholars have postulated that clues about the meaning of the Igbo-Ukwu objects might lie with the Nri people who reside in the Lower Niger region of Nigeria and are likely ancestors of the people who lived in ancient Igbo-Ukwu. Nri socio-political structure is organized around the Eze-Nri, an individual with both political and spiritual power. Leopards are among the symbols of power associated with the Eze-Nri, so there could be a relationship between the symbolism of rulership in ancient Igbo-Ukwu and that among the Nri. While it is tempting to use the customs and beliefs of the Nri people to interpret the imagery of Igbo-Ukwu bronzes, we should do so with caution since these two cultures are separated by over a millennium. Even if exact interpretations remain elusive, it’s clear that Igbo-Ukwu artists incorporated complex symbolism in their works of art. An excellent example of this layered symbolism is an elaborate Double Egg Pendant depicting two eggs topped by a downward-facing bird. Dangling beaded strands with crotales extend from the pendant, and we can imagine the kinetic and auditory dynamism of the pendant as it was animated by the wearer’s movements. Like the Vase with Rope and Shell Vessel with Leopard, the Double Egg Pendant showcases tremendous detail and craftsmanship. These qualities are perhaps best seen in the tiny insects that decorate the surface of the egg forms. Interpretations of the Double Egg Pendant imagery have varied widely, with some scholars suggesting that it represents a strong metaphor of fertility and, perhaps, even a visual pun that conflates the bird and its eggs with male genitalia as dual symbols of generative power.

Using radiocarbon dating, Shaw concluded that the bronzes, beads, pottery, and burial were from the 9th to 11th century C.E. While some scholars have questioned Shaw’s conclusions, arguing for a somewhat later date in the 15th century C.E., the earlier dates are widely accepted today. Significantly, this conclusion means that the artists of Igbo-Ukwu created the earliest known examples of cast bronze objects in West Africa. The technical skill and aesthetic complexity of the bronze objects from Igbo-Ukwu further suggests that they belonged to a well-established tradition of artmaking.

One of the biggest questions that remains about the culture of ancient Igbo-Ukwu is in what ways it was connected to other cultures and societies, within Africa and beyond. Scholars generally agree that the raw materials used to create the bronzes and the casting technique itself were indigenous to the region of modern-day Nigeria and likely demonstrate a strong network of local and regional trade. However, the glass beads discovered in Igbo-Ukwu could have their origins in Egypt or possibly even India. This would suggest that the people of Igbo-Ukwu participated in the vast and complex trans-Saharan trade networks that connected societies across Africa to the greater world.

Scholars also continue to search for answers about how society in ancient Igbo-Ukwu was organized and what led to the apparent abandonment of the site in which so many objects of ceremonial and aesthetic significance were held. Though questions remain, it is clear that ancient Igbo-Ukwu was a wealthy, connected society that flourished in the tropical forests of the Lower Niger region centuries before the renowned ancient Nigerian kingdoms of Ile-Ife and Benin.

Video from the Smithsonian National Museum of African Art

William Dewey, “Igbo-Ukwu” on Art and Life in Africa (University of Iowa)