Think of the last time you saw an interior space that impressed you. Whether you were watching Game of Thrones or reality TV, walking onto a college campus or into a major museum for the first time, some spaces are designed to wow—and intimidate—visitors. The audience hall in the palace in Benin City, in present-day Nigeria, was a space made to wow. It communicated to visiting ambassadors, traders, courtiers, and subjects the power and wealth of the Oba (the king).

During the sixteenth century, the pillars of the Oba’s audience hall would have been covered in bronze relief plaques like the one above. Two men stand with their feet firmly planted on an imagined plane. The men wear coral beaded regalia from head to toe—coral crowns, special high collars called odigba that signal their elite rank, beaded sashes across their chests, and beaded bands around their wrists and ankles. 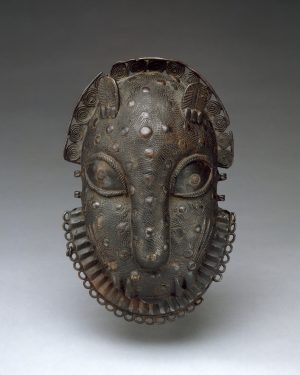 Only the Oba could grant permission to wear coral, an imported luxury related to his control of overseas trade with Portugal and, later, the Dutch, English, and French. The coral and the river-leaf pattern in the background also refers to Olokun, the god of wealth whose palace is under the sea.

The scars on the men’s chests, called iwu, were the mark of Benin subjects until the late nineteenth century. While the men’s attire signals their position within the court and their reliance on the king, their gesture announces that they are loyal and obedient subjects. Each figure holds a special fish-shaped sword, called an eben, aloft. Even today, these swords are used to dance in honor of the Oba. During palace festivities, courtiers throw them spinning into the air and catch them before they touch the ground — a display to honor the king.

Decoration for a grand palace

The plaque above was originally displayed on a pillar in an audience hall located deep within the palace. Pillars held up the roof of a veranda with built-in seating that ran around a large open-air courtyard in the center.

Historical accounts from visiting traders to Benin City suggest that the audience courtyard was roughly 30 by 60 meters (98.43 x 196.85 feet) [1] and could fit 500 people.[2] Likely beginning during the reigns of Oba Esigie (who ruled from 1517 to the 1550s) and his son Orhogbua (who ruled from the 1550s–1570s), the pillars surrounding the audience court were covered with more than 850 bronze relief plaques like this one. A surviving plaque shows what the audience hall must have looked like at the time, with a high roof ornamented by a cast-bronze snake and depictions of courtiers and warriors on the plaques decorating the pillars below. Hanging on all sides of the columns, the plaques would have created the impression that the pillars were of solid bronze — a form of currency at the time.

The plaques were deinstalled from the audience court in Benin City before the beginning of the eighteenth century, and kept in a storeroom within the palace until the British invasion of 1897. They are kept today in museums in Nigeria, the UK, Germany, Austria, and the United States. Recent research suggests that the plaques were made in three separate periods. The plaques were all made using the lost wax method, where an artist creates a form in wax, covers it in layers of clay, and bakes the mold until the wax runs out. The artist then pours molten bronze into the hardened clay form, and breaks the form to release the final casting.

The early plaques are all low reliefs, meaning that they are fairly flat, without many details that rise off the surface of the plaque, like this plaque depicting a crocodile biting a mudfish.

From low to high relief

Low reliefs are easier to cast, because the artist does not need to worry about molten metal reaching each part of the form before it cools. In the later series of plaques, however, artists cast high reliefs, meaning that they have greater depth. In the plaque discussed above, the thin swords are fully free of the plaque surface, a daring compositional choice that required careful management of the hot bronze to fill the form. The switch to high relief suggests that the artists were becoming more confident in the medium of bronze reliefs. It may also reflect the artists’ observations of how the completed reliefs looked once installed on the palace pillars. The later plaques, characterized by high-relief compositions of human figures that fill the entire surface, would have been easier to see from across the large courtyard.

Why did the kings of Benin commission this ambitious program of court decoration? Oba Esigie fought his brother for the throne and then faced an attack from a neighboring army and the disobedience of his senior courtiers. He may have commissioned the plaques to assert his wealth and power to internal and external enemies, creating the impression of a strong monarchy despite the rocky start to his reign. The earlier plaques depict elements of regalia and metaphorical animals relating to the Oba, as well as courtiers and warriors depicted in simple, three-person compositions in hierarchical scale, where the most important person is largest. All of these motifs indirectly allude to the king and his power. The narrative presented by the later plaques more explicitly honors the might and authority of the king.

Rather than referring to the Oba through court regalia or metaphorical creatures, these compositions depict people in direct service to the crown: participating in processionals, battles or ceremonies, like the men holding the eben dance swords. The plaque commission was likely one element in cementing Esigie’s authority. By the end of his reign and through the reign of his son Orhogbua, the court gave greater support to the monarchy.

Read more about a chronology for Benin art

Cite this page as: Dr. Kathryn Wysocki Gunsch, "The Imagery of Power on Benin Bronze Plaques," in Smarthistory, January 28, 2020, accessed May 17, 2022, https://smarthistory.org/imagery-power-benin-bronze-plaques/.