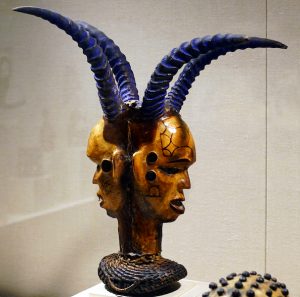 Skin-covered headdresses are owned by associations whose membership is defined by age, sex, vocation, or skill. These associations include hunter and warrior societies, age-level groups, and societies of wealthy men and women. The headdresses are worn during funerals and initiations of association members and sometimes used for ceremonies related to agricultural concerns.

The technique of covering carved wood headdresses with leather is unique to the area along the Cross River, which straddles the border between the present-day nations of Nigeria and Cameroon. Artists use antelope skin softened by a lengthy soaking in water. The skin is then stretched over the carved wooden form and bound and pegged in place, where it eventually dries and stiffens. A glossy surface is achieved by rubbing the headdress with palm oil prior to its performance. The performer, who wears a long gown of string netting or cotton cloth, attaches the basketry cap of the headdress to the top of his head with a chinstrap. His face is covered with semitransparent cloth. Between performances, the headdress is wrapped and stored with great care. This exceptional example has a solid wooden core carved with two similar faces in opposing directions, often referred to as a Janus face. The strikingly lifelike faces, covered with leather, have eyes made of separate pieces of leather pegged into the finished piece. Four curved and ribbed antelope horns, accented with blue pigment, are set into holes on the top of the head. Painted designs on the forehead and cheeks of the faces represent nsibidi, an indigenous writing system whose symbols were sometimes tattooed on the human body. Multiple levels of meaning are attached to such symbols, knowledge of which is often restricted to association members of the highest status and rank. Likewise, the Janus face has several levels of meaning. It conveys the ability to simultaneously see what is in front and behind, to discern connections between past and future events, and to observe both the human and spiritual worlds.