The chorus of a popular song by composer Joseph Mazzinghi was the inspiration for the title of John Singer Sargent’s painting Carnation, Lily, Lily, Rose. In Sargent’s hands, however, the pastoral images of the song have been banished, replaced by an evocative twilight scene of children, flowers, and Chinese lanterns. The muted light and colors, unusual angles, and the lack of narrative content combine to create a beautifully rendered moment, capturing the fleeting atmosphere of dusk and the innocence of childhood. Carnation, Lily, Lily, Rose was painted in the English village of Broadway. The artist had moved to London after leaving France due to the scandal caused by his painting Madame X, which was exhibited at the Paris Salon in 1884. Sargent’s striking female portrait was the subject of enormous controversy due to the plunging neckline of her dress and the fact that originally one strap had been hanging off her shoulder (this was later repainted firmly in its correct place). Although the sitter, Virginie Gautreau, a fellow expatriate American who had married a French banker, was not explicitly identified, audiences recognized the likeness as well as her habit of using lavender dusting powder. Rumors of Gautreau’s infidelities were rampant, so the risqué portrait added fuel to the fire, for both artist and sitter.

For several years after his move to England, Sargent spent his summers in Broadway, a picturesque village in the Cotswolds, which was also the site of a thriving artist’s colony in the late 19th century. Both English and American artists and writers congregated there, and Sargent joined an expatriate community including such notables as Frank Millet, Edwin Austin Abbey and the writer Henry James. According to James in an article published in Harper’s New Monthly Magazine in 1889, “Broadway and much of the land about it are in short the perfection of the old English rural tradition,” and here Sargent found both acceptance and inspiration for his work. Sargent got the idea for the painting in August of 1885 after seeing a group of children among flowers and Chinese lanterns hung among trees in the village of Pangbourne in Berkshire. He spent more than a year trying to bring his vision to fruition. In letters, he pointed out that he was hindered from completing the painting in September because it was the end of the flowering season. Taking no chances, when he returned to Broadway to finish the painting in the summer of 1886, he had a friend grow lilies in pots to extend his available time for working on the painting. In addition to the problem of maintaining blossoms, Sargent was plagued by other issues. His original intent for the composition was to use one younger child, but he was eventually forced to select little girls who were a bit older and able to pose as required. White dresses for the girls were specially designed. Most importantly, the painting was completed “en plein air” to get the correct effect of light, but given the fleeting nature of light at dusk, he could only paint for a few minutes each day. However, the effort that went into Carnation, Lily, Lily, Rose proved worthwhile. The painting was well received by both audiences and critics when it was exhibited at the Royal Academy in 1887 and was immediately purchased for the British nation by the Chantrey Bequest, a fund established by sculptor Sir Francis Chantrey to acquire works of art made in England. The subtle effects of light illuminating the faces of the little girls, the subtly sketchy brushwork, the unusual angle looking down at the children (taken from the influence of Japanese prints), and the attention to capturing the momentary changes of twilight all speak to Sargent’s modernity. Sargent’s painting is a combination of several radical ideas found in the art of the end of the 19th century. Like Impressionism, it captures a distinct moment. In an instant, the children could move, or the light change and the spell would be broken. It is worth pointing out that Sargent was friends with Claude Monet and had in fact been invited to exhibit with the Impressionist group, an honor he declined. The picture is also firmly associated with the Aesthetic Movement, with its insistence on beautiful subjects and a lack of narrative content. Like the song that inspired its title, the painting reminds the viewer of a simpler time, creating a quietly beautiful snapshot of a bygone era. 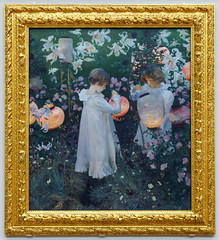 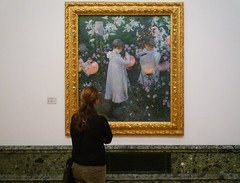 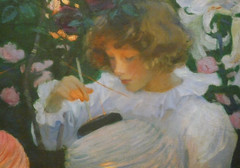 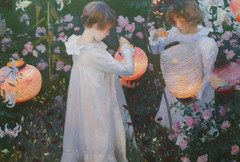 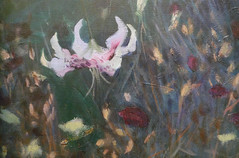 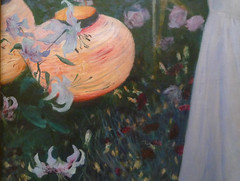 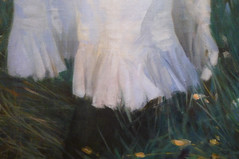