Like sculpture in Medieval Europe often created to embellish architecture, this magnificent work was commissioned for a principal entryway, originally one in a suite of five veranda posts. Hand carved from one sizeable piece of high-density hardwood timber, this work by the renowned Yoruba artist Olowe of Ise originally measured more than five feet high.

He has skillfully created a complex composition comprised of five figural elements on a circular base: the crowned king, his senior wife, and three smaller attendants (one now missing) in the royal household. Portrayals of rulers and their privileged power of earthly and divine authority unite the many global art traditions across time and space.

Similar to the systems of Medieval European guilds of craftsmen, nineteenth- and early twentieth-century Yoruba artistic traditions were maintained by artists working in specialized carving centers throughout the southwest area of Nigeria. “Master carver” designated a person who attained the skills through training and advanced from apprentice to master within a locally established carving center or compound. A carver with exceptional talent often set up a studio on his own, accepted apprentices and assistants, and was commissioned directly.

One great master carver, Olowe of Ise, became a widely celebrated artist for his virtuosity of invention and design developed through the production of a range of notable and important royal commissions in the early twentieth century. Born in the town of Ise, according to published accounts, most of his life was spent working in the court center of Ise though he took commissions from other royal patrons over a wide area in the Ekiti region.

Olowe’s highly original and unique style results from the  variety of elements and details that he has made his own and that can be found in many of his published works. His remarkable ability to free the figures from the dense hardwood is unlike any other Yoruba carver. His virtuosity can be seen in the elegant balance of the fully three-dimensional figures in a tiered composition and placed in a variety of poses on a single base.

He treats the heads as a single ovoid form leading the eye to the crowned head of the king (Ogoga) and his attendant queen. The heads project at a diagonal angle that are mounted on highly elongated and slightly forward-bending necks, creating a distinct line down to their squared shoulders. The convention of elongating the figure, head, and neck can be seen in many of Olowe’s carvings, creating a solid “mounting” to visually highlight the importance of the head that holds ase, or the inner spiritual power, dignity, strength, and sacredness of one’s destiny.

Yoruba traditional thought and belief is often made manifest through hieratic proportions. The status of the king’s consort is visually relayed by her physical size. However, it is balanced by the location of the seated king at the center of the post. His crowned head has been positioned so that it would be viewed at eye level in the original veranda setting. His feet are not allowed to touch the earth, a symbol of his transcendent position. His eyes are downcast, introspective, and attentive to the world beyond. He wears a conical beaded crown, signifying the legitimacy of his reign. The crown is decorated with four carved ancestral faces or ‘heads’ with open eyes, a reference to the divine line of descent and spiritual wisdom (ase) it contains. The style of the hats with serrated lines can be found in many of Olowe’s works. In traditional Yoruba religious belief, the crown is the key emblem of the power of a sanctified reign, signaling the transformation of the human wearing it into a conduit to the spiritual, ancestral realm. Three small figures, scaled according to culturally-specific status, are at the base: a female who kneels in a gesture of humility and reverence; a standing court messenger identified by his half-shaved head playing a flute announcing the king’s presence; and a third, now missing, standing while holding a large circular fan, emblem of royalty and Osun, the river deity. The king sits poised, leaning slightly forward, his weight held by his hands on his knees. A bird at the summit of his crown, a sign of transformational abilities and the protection of ancestral mothers, is rendered with an elongated beak that extends down to touch the very center of the beaded crown. Its tail points upward to the head of the standing consort who wears three vertical parallel facial marks with a line running from the left side of the bridge of the nose, identifying lineage to a principal Yoruba family, the Egbas.

She displays a once common practice in the Ekiti area of filing the front teeth as a sign of beauty and rank. Her elaborate hairstyle would reflect one worn for a festival honoring a deity (orisha) or during a chieftaincy installation. On her back, Olowe has replicated the queen’s striking scarification patterns that are associated with her community and high status.

The formidable queen stands erect behind and towering over the king, yet they are visually connected by her hands gently resting on the back of the throne. Beaded coral adornments worn by the king and queen echo the form of their squared shoulders, and other beaded adornments are included, worn by entitlement as a member of the royal household. Traces of blue, red, and white pigments can be seen. They were once most likely prominent, but the colors have faded over time as the work was exposed to the outdoors.

A suite of five architectural posts commissioned from Olowe by the crowned king (Ogoga) of the town of Ikere, in Ekiti state, could be found situated in the  principal entry to the local palace veranda and reception courtyard. Three of the major carvings appear to be functional supports, extending to the top of the veranda roof. Two multi-tiered figural posts flank a central geometric form, while two others facing outward represent a senior mother presenting her twins and a royal equestrian. A smaller freestanding equestrian figural group is at the center. Photographed in situ more than two decades later (1958 and 1964), three of the original works had been reinstalled under a newly replaced palace veranda. The enthroned king with his senior wife is repositioned at the center and facing outward toward visiting guests, flanked by the senior mother with twins and the royal equestrian. All three appear to be structural supports. All three are now in American collections.

Olowe of Ise was flourishing in southwest Nigeria in the early twentieth century, coinciding with the time when early Modernism was emerging in the avant-garde circles in Paris studios. African art was displayed in the Musée d’Ethnographie du Trocadéro in Paris, arriving in the late nineteenth century as a result of scientific expeditions and colonial conquest. Constantin Brancusi would have been inspired by works from francophone colonies, as King of Kings demonstrates. Similar to Olowe’s veranda posts, this work was originally intended to stand in an architectural space, Temple of Meditation, a private sanctuary commissioned in 1933 by the Maharaja Yeshwant Rao Holkar of Indore. 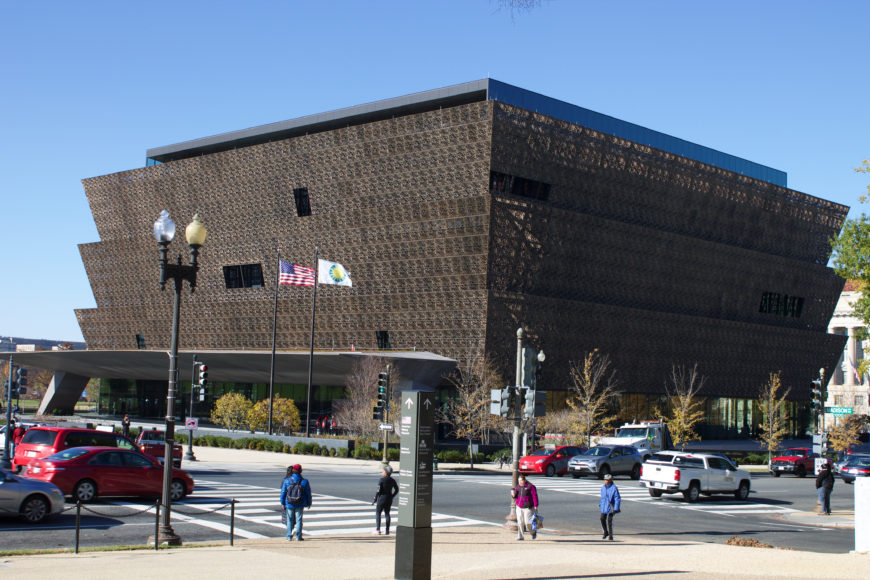 Architect David Adjaye was inspired by the top element of another of Olowe’s veranda posts for his design of the National Museum of African American History and Culture, Washington, D.C. Smithsonian Institution. Depicting a notable equestrian leader, the multi-figural veranda post is on long term loan from the Museum of Five Continents, Munich, Germany and installed on the 4th floor.

This object at the Art Institute of Chicago

Olowe of Ise in the Smithsonian National Museum of African Art

Read more about Olowe of Ise