If you take a poll of scholars and ask, “what was the most important change that marked the transition away from medieval visual culture in northern Europe?,” you’d likely receive responses like the “printing press” or “self-portrait.” To be sure, art historians tend to focus on innovation. We like to pinpoint concrete moments of great change to nicely divide epochs. However, it is not like anyone woke up one morning in the fifteenth century and suddenly declared, “today starts a new era called early modern.” Rather, the periods typically defined as “medieval” and “early modern” overlapped in the fifteenth century; not in any sense does one epoch simply end and the other begin.

This chapter looks at a crucial overlapping theme of late medieval and early modern northern Europe: how the multimedia image shaped Christian devotional practices from c. 1300–1520. After reading this chapter, you’ll gain an understanding of the function and meaning of objects used to guide prayer and contemplation in Christian visual culture. These objects were often complex, richly layered, and employed more than one artistic material—such as the combination of painting and sculpture. Hence, the term multimedia.

The periods of focus in this chapter witnessed significant social and religious transformations leading up to the Protestant Reformation. Within this timeframe, you will see how the proliferation of devotional images for private and public consumption necessitated the regulation and control of religious images—especially three-dimensional ones.

The relationship between religious subject matter and the medium of sculpture is central to understanding Christian veneration in northern medieval Europe. Medieval devotional images were often used to complement and extend Christian scripture. How to appropriately translate the word of God into an image, however, was hotly debated throughout the Middle Ages. The primary source on the role of images comes from the Second Commandment in the Old Testament of the Christian Bible, which states:

Among all artistic media, sculpture was thought to most closely verge on idolatry (the worship of an idol or image of God). Because sculpture exists as a three-dimensional presence in direct relation to the viewer, sculpture could easily be confused as a holy figure rather than a representation or prototype of a holy figure. As a result, church authority sought to regulate sculpture in public spaces such as the interior of churches, where sculpture encompassed different functions for worship or memorial remembrances. In private settings of worship, the church had less control over the content of devotional images.

The objects in this section reflect the range of sculpted images related to Christian devotional practices. A popular embodiment of church-approved pre-Reformation piety was the cult of relics (the material remains or an object physically associated with a Christian martyr). Sumptuously gilded and opulent reliquary sculptures were created to honor, protect, and contain relics, such as the enshrined reliquaries of Ste. Foy and the Virgin of Jeanne D’Evreux.

Other free-standing sculptures in the church space were meant to entice the Christian viewer. The Röttigen Pietà depicts the gruesome aspects of Christ’s death to elicit an emotional connection. The St. George and the Dragon sculpture in the Storkyrkan in Stockholm translates a complex narrative into an over-life-size three-dimensional image, resulting in a highly dynamic relationship between the viewer and the religious imagery within the church space. 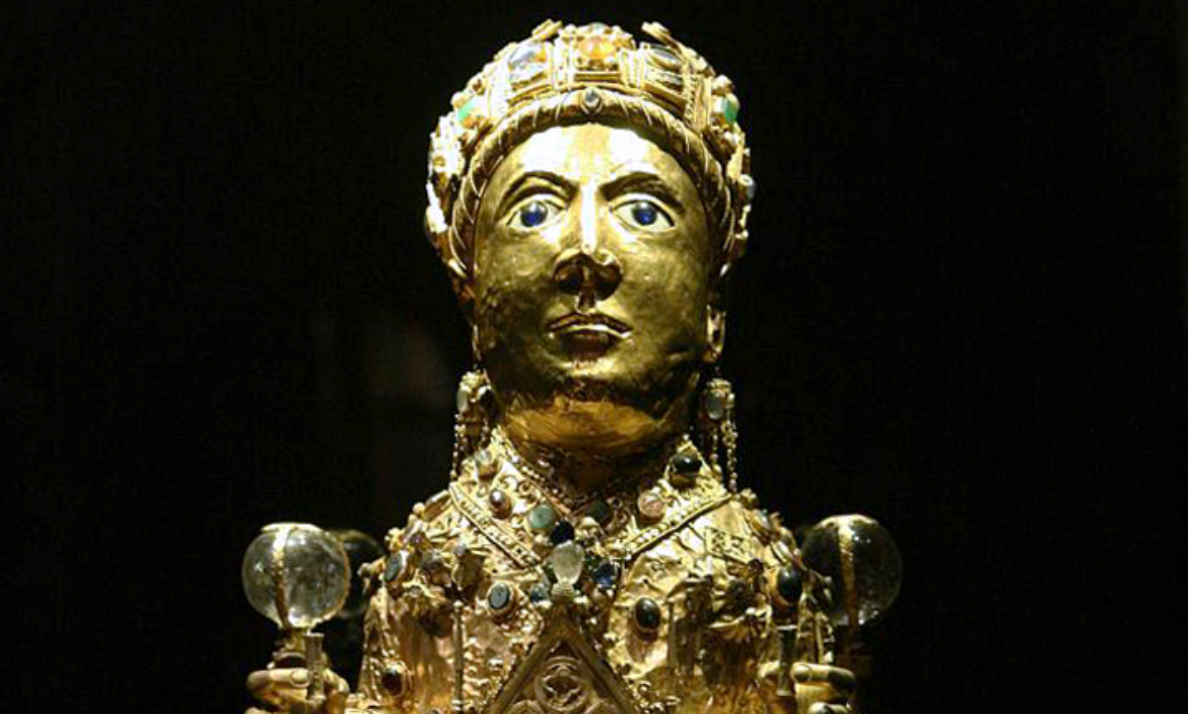 Church and Reliquary of Sainte-Foy, France: A gold, gem-encrusted reliquary attracted both pilgrims and wealth to the sleepy medieval village of Conques. The Virgin of Jeanne d’Evreux: Mary’s swaying hip, elongated neck, and tender touch of the Christ Child all imbue this golden sculpture with grace. A pomegranate signals death. Röttgen Pietà: Focusing on the gruesome aspects of Christ’s death helps to elicit an emotional connection. 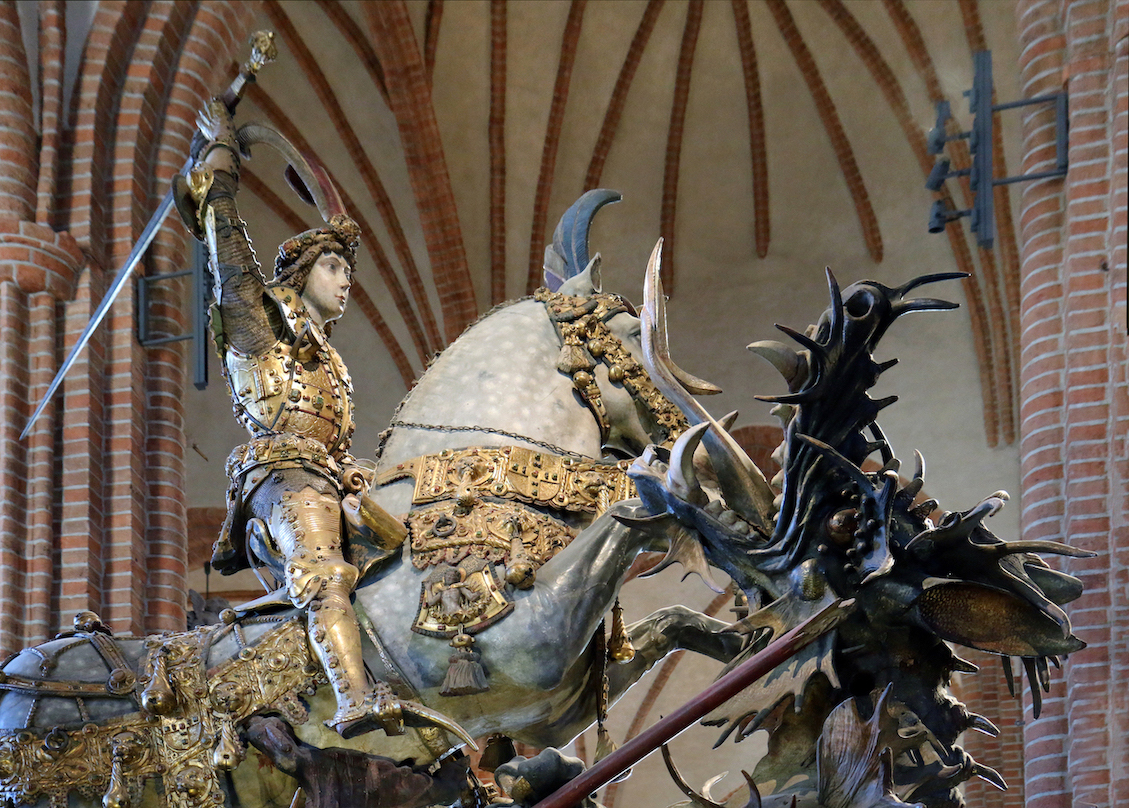 In addition to free-standing sculpture, the altarpiece was perhaps the most common form of three-dimensional devotional art in churches. Installed on nearly every altar in pre-Reformation northern Europe, altarpieces primarily served to enhance the Mass ritual (the central act of Christian worship). This section considers how the altarpiece dually worked to promote and control sculpture.

A specific configuration of the altarpiece included wings. The organization of the winged altarpiece predominantly places sculpture at its center, flanked by a set of hinged doors that open and close. The wings also allowed the Christian clergy to regulate the viewing of sculpture, such that the central sculpture was exposed only on the most holy days of the Christian liturgical calendar. Indeed, the rare appearance of sculpture enhanced its power as seemingly divine, exacerbating the conflation between saintly subject and object.

Early appearances of the winged altarpiece structure can be seen in an enclosed sculpture of the Shrine of the Virgin. The versatility of winged altarpieces attracted a wide audience of users and patrons from dukes to merchants, and further allowed artists to play with size, measuring from miniature to massive. Altarpieces like Michael Pacher’s or Hermen Rode’s demonstrate the flexibility of the winged altarpiece to cater to specific groups and wealthy nobles. The sixteenth-century miniature altarpiece is another expression of the adaptability of the altarpiece’s winged form in the early modern globalized world. The Medieval and Renaissance Altarpiece: The story embodied on the altarpiece offered an object lesson in the human suffering experienced by Christ. Shrine of the Virgin: Hiding the divine in a medieval Madonna. Pendant triptych with scenes of the Passion: A Renaissance miniature in wood and feathers.

The Ghent Altarpiece, a massive polyptych, likely had a carved baldachin to closely mimic the structure of altarpieces with a carved center.

In the closed view, the figures of St. John the Baptist and St. John the Evangelist are painted in grisaille (grey monochrome rendered to appear like unpainted stone sculpture), and stand as examples of how artists could grapple with the representational differences between painting and sculpture.

The Merode Triptych features visual references designed to draw attention to the structure of the triptych with side panels that open and close like doors. In the left panel, the patron holds keys to unlock the door to the interior and a figure enters through a door into the enclosed courtyard.

Watch videos and read an essay about early Netherlandish triptychs Jan Van Eyck, The Ghent Altarpiece: The altarpiece itself is a visual “moveable feast,” made up of 12 panels that fold against themselves. 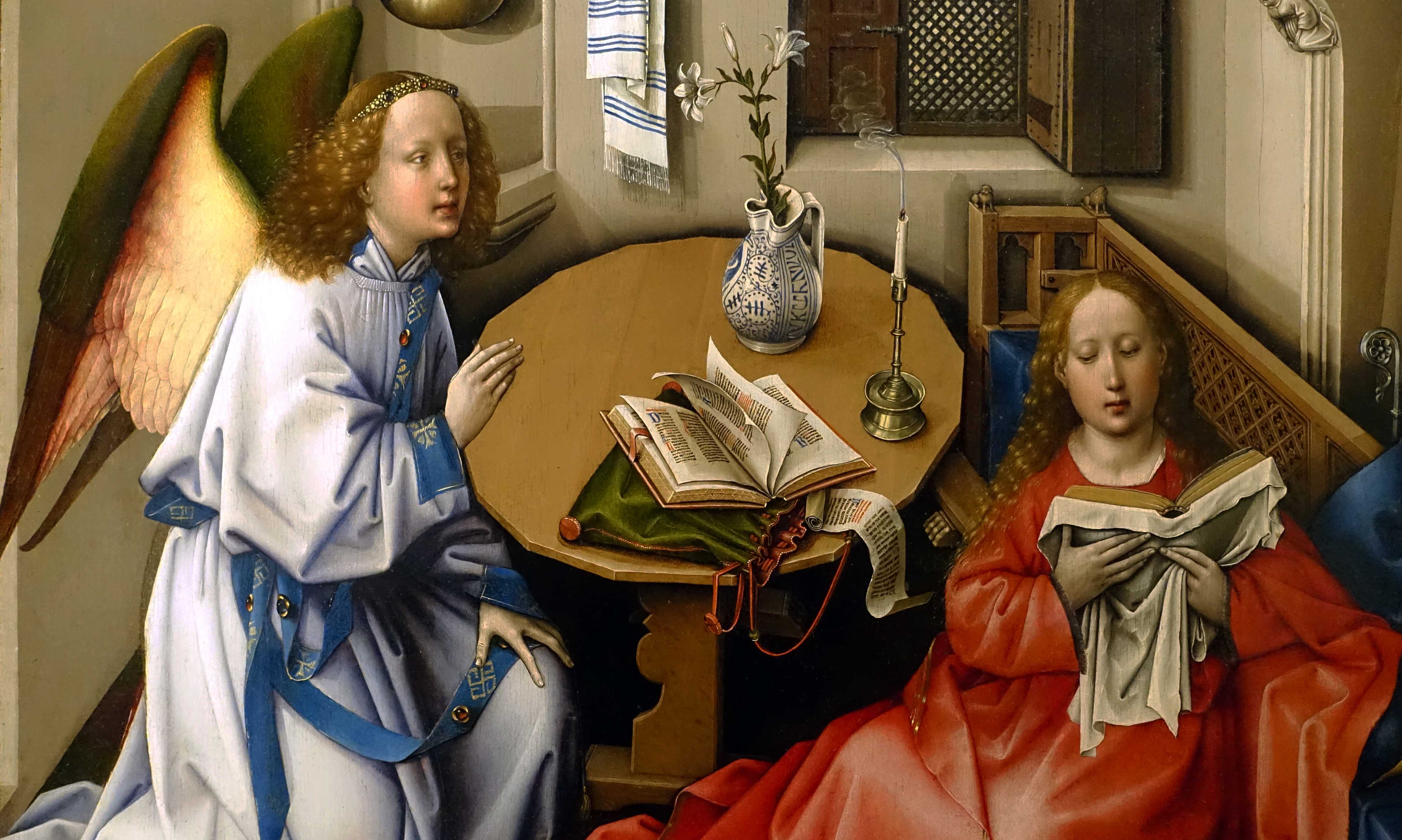 Workshop of Robert Campin, Merode Altarpiece: It features visual references designed to draw attention to the structure of the triptych,

Fear of Death and Dying

The notion that the devotional image was imbued with power posed a crisis during the Reformation. Two large-scale altarpieces—Grünewald’s Isenheim Altarpiece and Bosch’s Last Judgment Triptych—made right before the momentous Protestant Reformation, attest to the growing anxieties on the efficacy of prayer and worship to secure a place in heaven.

The Isenheim Altarpiece was made for a viewing community infected with ergotism. The macabre image program relates to the ability of art to guide salvation, as well as to potentially heal and cure.

For artists like Bosch, humanity is inherently sinful and needs holy figures for salvation. Bosch became highly critical of clerical powers, and his Last Judgment Triptych represents a world overrun with demons, which only the strongest and rarest of people can resist. He paints a gruesome and grotesque world, yet such dark iconography has its roots in hell mouths and apocalyptic scenes as seen in earlier medieval art. Matthias Grünewald, Isenheim Altarpiece: The macabre and distorted Christ is splayed on the cross, his hands writhing in agony, his body marked with livid spots of pox. Painted panels by Rogier van der Weyden of the Crucifixion, with the Virgin Mary and Saint John the Evangelist were once part of a very large altarpiece with a now-lost sculpted center. The fact that more  painting than sculpture has survived is often the result of modern interventions, such as the dismantling of multimedia altarpieces for the art market in the nineteenth century.

Iconoclasm, the intentional destruction of images, serves as another cause for the loss of sculpture. Sculpted images were especially attacked during the Iconoclasm of 1566 in The Netherlands, also known as Beeldenstorm (Dutch for “image storm”). Protestant theologians remained highly skeptical of the power of devotional objects—including both painting and sculpture—noting that the veneration of physical objects bordered on idolatry. Such ramifications of Protestant practice meant that devotional sculpture, a three-dimensional physical object, was targeted first during destructive waves of iconoclasm in the sixteenth-century Netherlands.

Watch a video about fragments Rogier van der Weyden, Crucifixion Triptych: What remains is but a fragment of a once larger altarpiece.

The devotional and multimedia image stands as one of many artistic threads that reveal the gradual shift away from medieval religiosity into early modernity. Others include the growing sense of artistic self-awareness, in which artists confidently asserted their individual authorship. Artists also started traveling for work more frequently, often under court patronage or part of workshop training. Although artistic identity and mobility became hallmarks of the expanded world in early modernity, they were ultimately born out of late medieval artistic culture.

How were multimedia images used for Christian devotion?

Why did religious images provoke anxiety leading up to the Protestant Reformation?

How were multimedia images used for Christian devotion?

Why did religious images provoke anxiety leading up to the Protestant Reformation?

Read a chapter about Northern art in the 15th and 16th centuries.

Read a chapter about different materials in the medieval Mediterranean.

If you want to learn more about the Reformation, check out: Introduction of the Protestant Reformation.

If you want to know more about the destruction of images, check out: Iconoclasm in the Netherlands in the Sixteenth Century.