This chapter deals with a time in Andean history (2nd century C.E.–c. 900 C.E.) when a multitude of cultures (among them the Jama-Coaque, Moche, Chimú, Nasca, and Tiwanaku) proliferated along the Andean coast and in the highlands. With this diversity of cultures came diversity of artistic expression—although many cultures held spiritual beliefs or ideas about the world in common.

While all of these cultures belong to what we think of as the Andean region, they flourished in different geographic terrains. The Jama-Coaque culture thrived in the fertile plains of modern-day Ecuador, and the Moche and Chimú cultures occupied the dry north coast of what is now Peru, while the Nasca were on the even more arid south coast. Tiwanaku is in the often-frigid highlands, near Lake Titicaca and modern Peru’s border with Bolivia.

Location and ecological zones helped shape some aspects of these cultures and their art, but as the Chimú introduction essay (below) shows, elites were not limited to what was available in their immediate region. They traded for exotic materials from far-away places like the Amazonian rainforest for brilliant feathers, the warm waters off what is now Ecuador for richly-colored Spondylus shell, and highland camelid fiber used in textiles, creating webs of contact.

The introductory essays to this chapter give some idea of the variety of art media, messages, and styles during this era. Nasca art, an introduction: The Nasca were interested in issues of design and abstraction centuries before the rise of abstract art in the twentieth century. Moche culture, an introduction: Not one unified political entity, the Moche were independent groups who shared common ideas—and artistic forms. Chimú culture, an introduction: The Kingdom of Chimor was conquered by the Inka, but impressive adobe walls survive in their capital, Chan Chan. Tiwanaku, an introduction: The main city center of Tiwanaku boasted a population of 25,000–40,000.

There are four main topics addressed in this chapter: making places with meaning, adorning the body, burying the dead, and people in art. In looking at these topics, we consider the larger view of how cultures structured the world around them through architecture and earth sculpture, and the narrower view of how people’s identities were expressed in life, in death, and in art.

As seen in another chapter that focuses on Andean art before 200 C.E., architecture can carry a great deal of meaning in its materials, spaces, and specifics of construction. In this middle period, we encounter many varieties of place-making: building structures and shaping the landscape through human effort. The geoglyphs of Nasca are enormous marks on the landscape, probably meant to communicate with supernatural beings and created through cooperative group effort. In contrast, the enclosures or ciudadelas of the Chimú capital of Chan Chan were exclusionary, with only one entry and high walls designed to let in only those who were worthy. They were most likely made through labor that was coerced, paid as a tax, or a combination of the two. Within, they mixed both secular and sacred elements—they served as royal courts during a ruler’s life and as their tomb after death. The city of Tiwanaku is best known for the sacred ceremonial center at its heart, but there were also areas where people lived and went about their daily lives. The large structures of the ceremonial center were most likely made with people paying a labor tax, working alongside specialists in stone building. In each case, what people build is relevant to their culture’s wants and needs, and the way they think things should be done. How does the architecture you encounter communicate its purpose to you? How do buildings today create meaning in our world?

Essays and videos about places 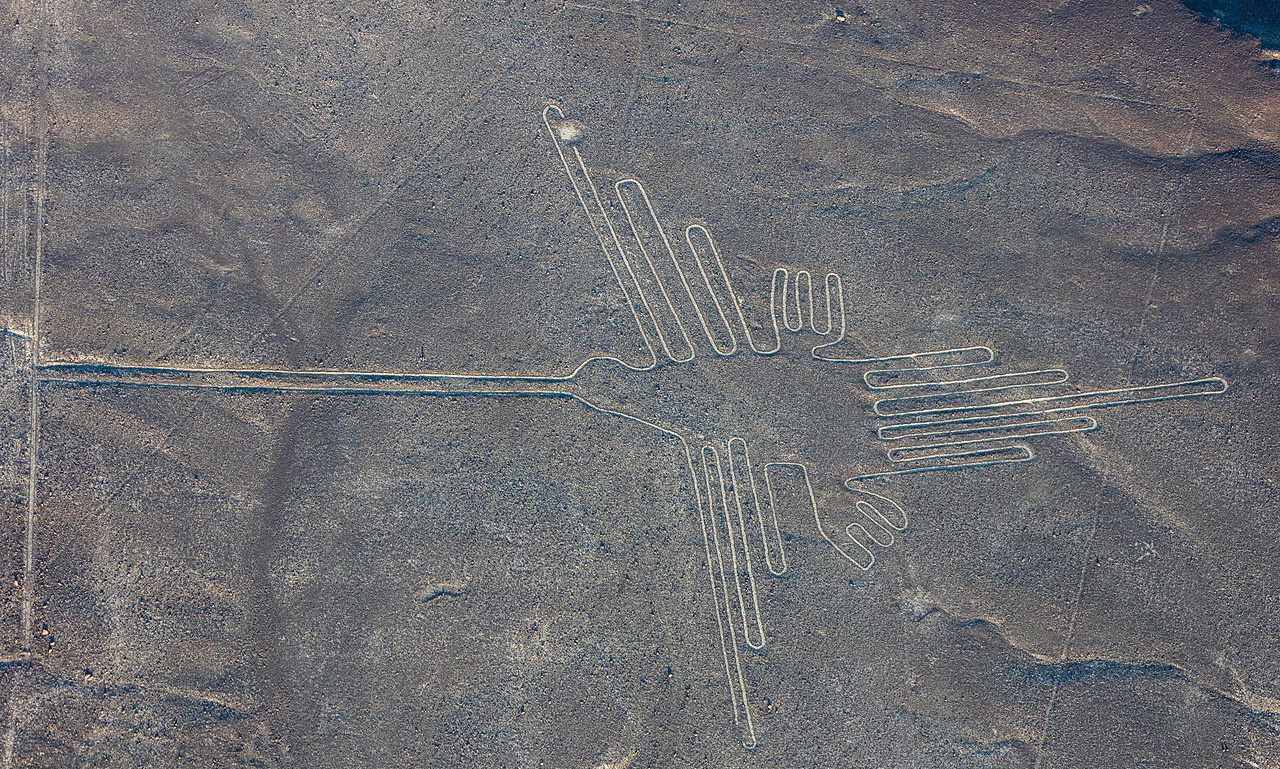 Nasca Geoglyphs: These images carved into the desert floor cannot be truly appreciated from the ground—so who were they made for? Tiwanaku and its semi-subterranean court: Marking the rise of Tiwanaku’s importance as a regional center.

Chan Chan: The planning of this huge city, the largest in pre-Columbian America, reflects a strict political and social strategy.

This section focuses on adorning the body, specifically with the use of jewelry and textiles (also the focus of a chapter on an earlier Andean period). In the Andes, as in many places, adorning the body was a way to communicate who a person was, including their gender and social status. The materials of their clothing and other adornments could also carry meaning, including where the material from which it was made came from, and how it had been constructed. Two of the most important forms of adornment were clothing and jewelry.

With the Paracas Textile (which is confusingly actually Nasca, the culture that followed the one we call Paracas) we can see that while the earlier Paracas technique of embroidery has been abandoned, it has been replaced with techniques (crossed looping and warp wrapping) that are equally time-intensive, carrying on the interest in showing wealth and power through the ability to command the resources and labor needed to create such an impressive textile.

Moche earspools are, like the Salinar nose ornament discussed in the “Early South America” chapter, meant to show the power and status of the person who wore them. In addition to gold however, we now see shell and semiprecious stones incorporated into the jewelry, adding color but also more exotic materials that would have been brought to Moche centers via long-distance trade with the highlands, the far north, and possibly Amazonia as well. Elite interest in clothing themselves in brilliant color persists in this period. What makes an outfit or a piece of jewelry a sign of wealth in today’s world? Are the criteria the same or different than those of the ancient Andes?

Essays and videos about adorning the body Nasca culture, The Paracas Textile: This nearly 2000-year-old old textile survives thanks to the arid environment of southern Peru where it was buried. Pair of Moche Earflares: Made of gold and inlaid stone, these earflares were probably worn for ceremonies rather than daily.

Burying the dead: power and gender

A common archaeological saying is that “the dead don’t bury themselves,” meaning how tombs are filled tells us as much about the people who did the burying as the people who are buried in them. What we end up with is a “burial identity” that may reflect what a person was like in life, but just as possibly reflects what they meant to the people who buried them. This can be especially true in cases of elite rulers, who often exist outside the normal identities that defined commoners or even nobles. Rulers also were able to break rules relating to gender expression, especially in ritual contexts. They are frequently thought of as descended from divine beings, and they can become powerful ancestors in death. In this section we have two examples from the Moche of the north coast of Peru, showing us elite burials of men (in the case of Sipán) and a woman (at Huaca Cao Viejo).

Essays and videos about burying the dead The Moche Royal Tombs of Sipán: Get to know the richest burial site in the Western hemisphere. Funerary bundle of the Señora de Cao: The discovery of this Moche woman’s luxurious tomb made scholars question the Moche culture’s relationship between gender and power.

In comparison, I am also including links to two cross-cultural examples: the tomb of Fu Hao from China, and the tomb of Tutankhamun from ancient Egypt. Fu Hao, a “warrior queen” whose exploits are recounted on oracle bones in her tomb, was, despite her high status, not buried in the royal cemetery—which fortunately kept her final resting place safe from looters. Tutankhamun, who died at the age of eighteen, had not accomplished much in his life compared to Fu Hao, yet was buried with an astonishing treasure that still captivates our imagination. These examples can help us think about how burials can reflect ideas about wealth, social roles, and gender, as well as how modern Western burial traditions differ from these ancient ones. War and Sacrifice: The discovery of Fu Hao’s tomb and the material objects she used in life and death confirmed Fu Hao’s role as one of the most important female military commanders, warriors, and ritualists in the history of ancient China. Ceramic endured as an important medium for expression in the Andean region. The works you will read about below all represent the human figure, some displaying the body heavily adorned. There are also some that are more abstract while others are more naturalistic. As you learn more about the examples below in essays and videos, you might ask yourself which ones could hold liquid? Which figures are associated with spiritual or supernatural forces?

Essays and videos about people in art Moche Portrait Head Bottle: Thousands of ceramic bottles were produced by Moche ceramicists, and many multiples were made using molds. Chancay Standing Female Figure: The blending of human and animal traits in this figure shows us that the Chancay people were keen observers of nature. Jama-Coaque ceramics: Many thousands of brightly painted and beautifully detailed sculptures were produced by the Jama-Coaque culture of modern-day Ecuador’s lush western coast.

All three examples are part of the larger Andean ceramic tradition, and build upon the technologies developed in the centuries before them.

How are these representations of people similar to or different from the ones we encounter daily? Can they tell us something about how representing a person is another way of talking about identity?

What and how did South American cultures decide what was valuable?

How did they communicate ideas of power?

What and how did South American cultures decide what was valuable?

How did they communicate ideas of power?