The Portuguese were the first Europeans to embark on extensive explorations throughout the Atlantic and Indian Oceans. By 1543, Portuguese navigators had established contacts as far west as Brazil and as far east as Japan. The motivations for these voyages were financial: overseas trade was often highly profitable, allowing European merchants to trade local items for foreign materials and objects, such as textiles, porcelain, and spices, that sold for high prices. In addition, the papacy and the Portuguese monarchy formed an agreement called the padroado that required the Portuguese to build churches and spread Catholicism throughout any regions that they controlled.

The relationships that Portuguese merchants, sailors, and missionaries formed with local inhabitants varied. Depending on circumstances, the Portuguese either cautiously submitted to local control, formed mutually beneficial partnerships, or resorted to violent domination. When trading with the Kingdom of Benin in West Africa, the Portuguese maintained positive relationships with the powerful Oba (king) for centuries. In contrast, after about 100 years of trading and spreading Catholicism in Japan, the ruling shogunate expelled the Portuguese in 1639 because Catholicism, and European interference overall, were viewed as a threat to political authority. In other regions, such as Brazil, Portuguese settlers formed villages and cities, displacing and enslaving local populations, and establishing long-lasting political and cultural authority.

These exchanges had consequences that are still present today. The movement of people, ideas, religions, and objects transformed cultures, economies, and political structures worldwide. Portuguese explorations paved the way for other European nations to travel, conquer, and exploit regions of Africa, Asia, the Americas, and the Pacific. The Portuguese began the transatlantic slave trade during which European traders forcibly transported an estimated 12.5 million captive Africans to the Americas over the course of about 350 years. The Portuguese domination and exploitation of areas outside Europe lasted for centuries, with some regions gaining independence as recently as 1975, and full political control of Macau was only handed over to China in 1999. As a result, Portuguese is currently an official language in ten regions: Portugal, Brazil, Angola, Cape Verde, Equatorial Guinea, Guinea Bissau, Mozambique, São Tomé and Príncipe, Macau, and East Timor.

This chapter includes artworks from the 1400s, when Portuguese voyages began to explore the coast of Africa, through the early 1800s, when Brazil gained political independence from Portugal. While interactions with the Portuguese are a common thread that unites these works of art, many of the objects and structures are not Portuguese but were created in various regions of the globe that had relationships with the Portuguese.

The Rise and Fall of the Avis Dynasty in Portugal: an introduction

Benin and the Portuguese: an introduction Colonial Brazil: An introduction to its incredibly diverse art and architecture.

In a book about the capital of Portugal, Lisbon, artist Francisco de Holanda portrays the city as a woman emerging from water holding a ship. Lisbon is located on the river Tagus that connects the city to the Atlantic ocean, and from there to the world (as you will see in the essay below about the Tower of Belém).

As a small nation bordering the Atlantic ocean, maritime navigation has been crucial to Portuguese history, economics, and national identity. Overseas travel gave Portugal access to markets on multiple continents, both to sell Portuguese goods (such as wine) and to acquire all sorts of products. It also enabled the Portuguese to invade and exploit lands and peoples. Technological innovations made this travel possible. Improved tools and mathematical calculations (many learned from medieval Arabic and Hebrew texts) enabled sailors to navigate south of the equator, and small, agile ships called caravels allowed exploration of the coast of Africa. To this day, the history of maritime exploration and colonization that began in the 1400s is central to Portugal’s national identity and is a source of national pride.

Essays about oceans, power, and identity The Tower of Belém: One of the main symbols of Portugal’s global expansion during the so-called Age of Exploration. The Cantino planisphere: Made by an unknown Portuguese chartmaker, it depicts what the Portuguese knew of the world in 1502. Belém Monstrance: An object of extraordinary artistry that embodies an immediate response to events taking place in Portugal and its overseas expansion.

Carlos Julião, watercolor manuscript: Hindu religion, Brazilian customs, and Andean artworks as seen through the eyes of a European colonizer.

In a Portuguese painting from the workshop of Jorge Afonso, the angel Gabriel interrupts the young Mary’s reading to tell her that she will become pregnant with the son of God (Christ), but the most notable aspect of this painting is the mat that Mary and Gabriel kneel on. The event is shown not inside a home appropriate to the biblical context but instead within a lavish European Renaissance structure with marble columns, arched doorways, and decorative niches. Instead of relying on historical accuracy, the painter celebrates the dignity of the event by showing Mary in a rich and sophisticated contemporary European home. The mat that Mary and Gabriel kneel on is a raffia textile from the Central African Kingdom of Kongo. As the Portuguese explored the Atlantic coast of Africa, they marveled at the quality of cloth that numerous cultures in West and Central Africa created out of raffia fiber. Sailors and merchants brought these raffia textiles back to Portugal where they adorned the homes of the elite, like the imagined home of the Virgin Mary in the painting, and served as curious and valued gifts.

A wide variety of luxuries from the many parts of the globe that the Portuguese explored made their way into European collections. Portuguese travelers purchased artworks that were created for local purposes and local tastes such as the raffia mats, as well as sometimes specifically commissioning objects from artists in other parts of the world (as was likely the case with ivory salt cellars—containers to hold salt—from West Africa).

In addition, some manufacturers, including porcelain and textile centers in China, created items specifically to appeal to Portuguese consumers. The artworks included in this section feature prestigious materials and exquisite craftsmanship. Some were used as impressive decorations while others were functional, such as the “Goa stone” that was probably made within a Jesuit workshop in or near Goa, India, and was thought to have medicinal properties.

Essays and videos about collecting the globe Sapi Lidded Saltcellar: African made and intended for the Portuguese market. 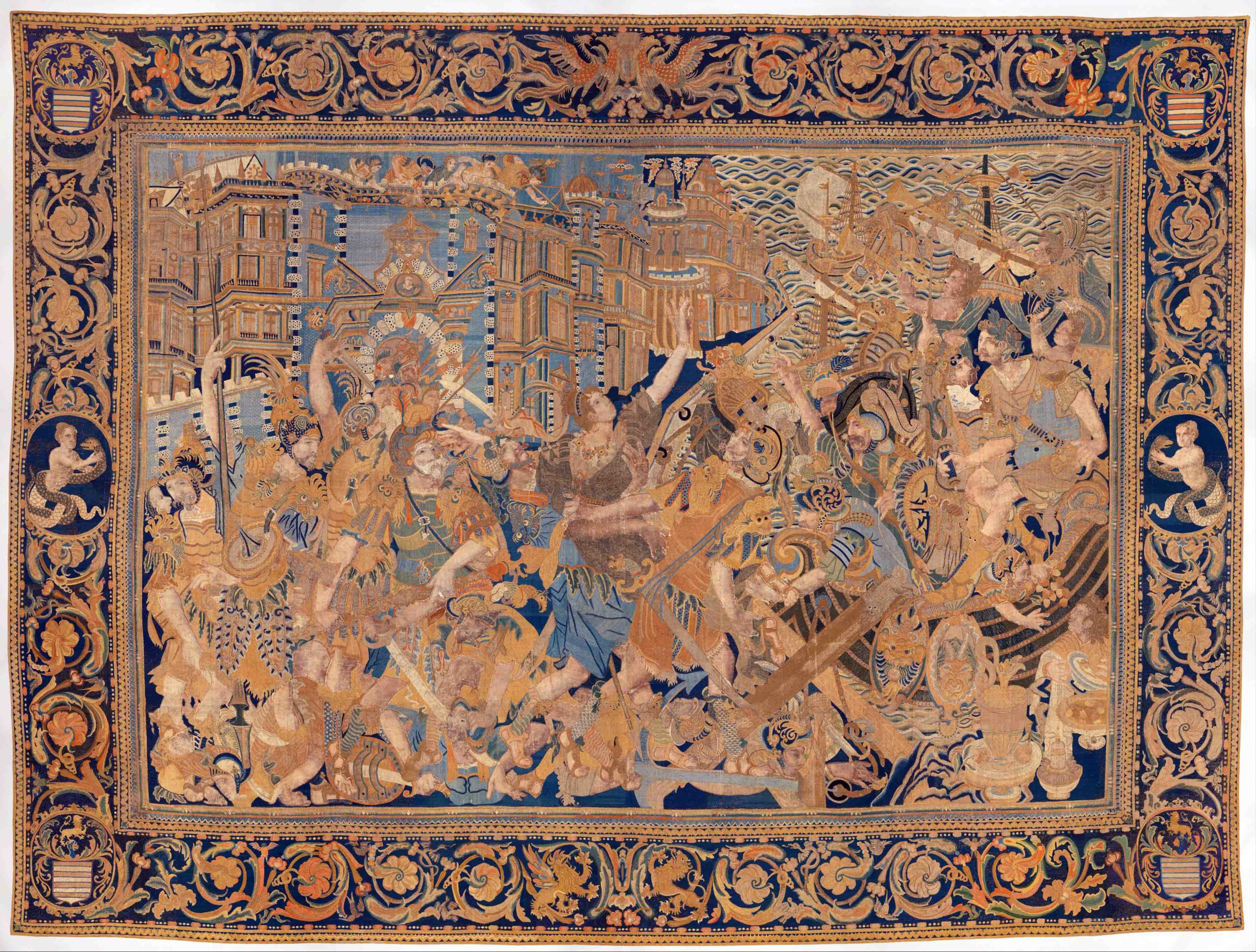 The Abduction of Helen Tapestry: An ancient Greek story on a tapestry made in China, for export back to Portugal. ‘Kraak’ bowl, from Jingdezhen: A Ming bowl with designs borrowed from seventeenth-century Portugal, Holland, and Iran. Goa stone and gold case: Why is this gall bladder in such an extravagant case?

Overseas explorations opened pathways not only for trade but also for religious conversion. Missionaries from various nationalities joined voyages to Africa, Asia, and the Americas with the goal of spreading Catholicism (in the wake of the Protestant Reformation) to the entire world. How locals responded to Christian missionaries and how those missionaries approached conversion varied. Conversion efforts in Asia, often led by the Spanish Jesuit Francis Xavier, experienced mixed results. In Brazil, Christianity spread not only with missions, but also with the immigration of Christian settlers from Portugal and the forced relocation of Christian Africans.

In Central Africa, the Kongo king wanted to create strong diplomatic ties with the Portuguese and chose to convert to Christianity as part of this process. Art and architecture was central to these conversion efforts and to the practice of Christianity throughout the early modern world.

Essays and videos about religious conversion Jesuit Missions of the Guaranis: The ruins of São Miguel das Missões (in Brazil), and those of San Ignacio Miní, Santa Ana, Nuestra Señora de Loreto and Santa María la Mayor (in Argentina) are the remains of five Jesuit missions in the land of the Guaranis during the 17th and 18th centuries.

Church of Our Lady of the Rosary of the Blacks, Ouro Preto: Among the most famous of Black brotherhood churches founded in Brazil A portrait of Saint Francis Xavier: The “Apostle of Japan” whose mission had inaugurated the Japanese Catholic Church.

Brazil under the Portuguese and Dutch

Brazil is the largest country to have once been part of the Portuguese empire. The Portuguese settled the vast land, displacing and enslaving Indigenous peoples and also bringing in enslaved Africans, with the goal of extracting resources and profiting off agricultural products. This lucrative natural abundance also attracted other European rivals. For a brief period, the Dutch took control of the sugar-producing region of Brazil.

A series of tapestries (woven wall-hangings) celebrates Brazil as a tropical paradise. The tapestries are based on designs by Dutch artists who had spent time in Brazil recording the landscape, plants, and people.

The hanging titled “The Two Bulls” not only depicts the natural resources of fruits and animals, but also displays a cultural product that a European audience considered foreign—the hammock—and includes a sugarcane plantation in the distance—a great source of wealth. Native Americans invented hammocks many centuries prior and used them both for sleep and, when hung over a pole, as a mode of transportation. When the white elite in Brazil used hammocks for transportation, enslaved Afro-Brazilians as those depicted in the tapestry typically carried the hammock and its passenger. The prints, paintings, and architectural complexes presented in this section demonstrate an interaction between European artistic conventions and the specific colonial context of Brazil with its Indigenous and African inhabitants.

Essays and videos about Brazil under the Portuguese and Dutch The Great Atlas, Dutch edition: A very expensive atlas from Amsterdam attempts to map the known world to Dutch viewers, including the Americas. Overseas travel during this time period brought together people, objects, and ideas from many different cultures. Artworks were central to this process of commercial and cultural exchange. These artworks can make visible the complicated power dynamics at play, and can disrupt traditional narratives that portray the Portuguese as peacefully creating trade posts rather than engaging in violent colonization, as well as narratives that describe powerful European travelers easily dominating weaker populations elsewhere.

When Portuguese merchants or consumers were interacting with artists in other continents, who was making decisions about an artwork’s materials, iconography, and design?

Who would have been viewing and using an artwork or architectural structure? How would different audiences have understood the objects?

When Portuguese merchants or consumers were interacting with artists in other continents, who was making decisions about an artwork’s materials, iconography, and design?

Who would have been viewing and using an artwork or architectural structure? How would different audiences have understood the objects?