This one-of-a-kind suitcase tells the surprising story of an artist, a wedding, and a people. 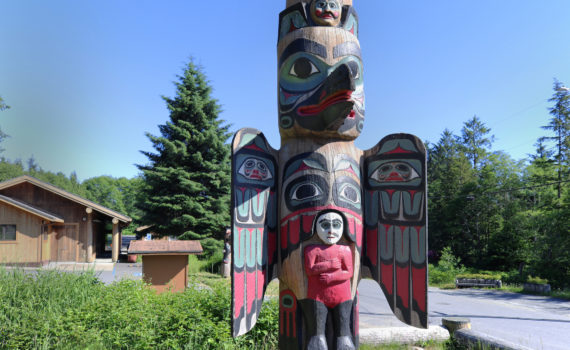 A totem pole records Tlingit claims to land in southeastern Alaska by acknowledging the first sighting of a white man, who happens to be based on the likeness of Abraham Lincoln. c. 1884
Martyr or murderer? The Last Moments of John Brown

John Brown has polarized political opinion from the Civil War to the Civil Rights Movement. 1884
Soaring above politics: the Washington Monument

Unlike the other monuments on the Mall, this monument tells us virtually nothing about the man it commemorates. 1885–91
Burnham and Root, The Monadnock Building 1886
The light of democracy — examining the Statue of Liberty

Two countries honor their love of democracy with a huge statue of a woman! Neither let women vote, though. 1890
“Leave it as it is”: Yellowstone and the creation of the National Parks

In order to capture the beauty of America’s national parks, Brown faced the prejudices of the lawless West. 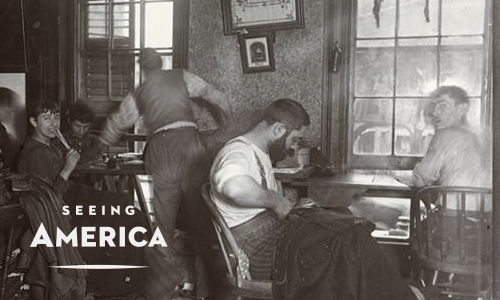 Riis snapped photos of the urban poor during midnight police raids—but only because he cared. The critics at the 1893 World's Fair in Chicago noted: "American art has made something of itself." Tanner studied in Philadelphia and Paris, and his style combined elements of American Realism and the Old Masters. 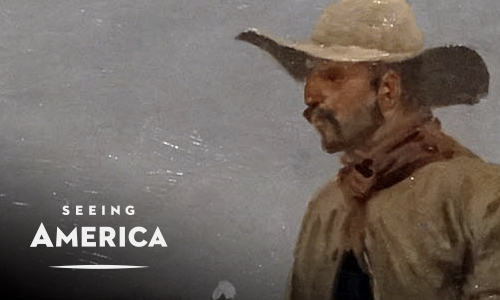 Remington mourns the decline of the cowboy by depicting the very thing that destroyed his iconic lifestyle. 1895
A modern gem, the Reliance Building A conversation that took place on Monument Avenue in Richmond, Virginia, just before the last Confederate monument on the boulevard was removed in September 2021 1897–99
Louis Sullivan and the invention of the skyscraper

A miracle on Bleecker Street, ornament, invention, and one of the great early skyscrapers 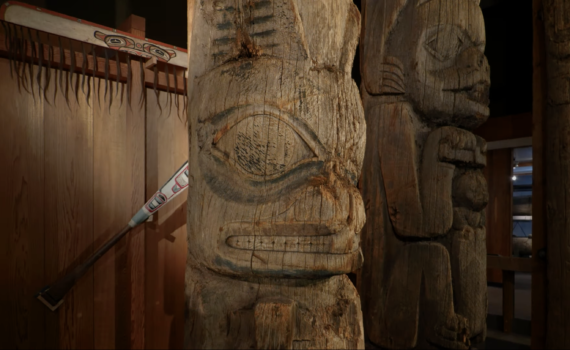 What is a potlatch? And how is it related to this totem pole? 19th century
The story of the Oyster Man, a Tlingit totem pole

Learn the story behind this totem pole that no longer stands

An Era of Innovation On the sidewalks of Pearl Street in late 1882, New Yorkers could peer into the windows of homes and businesses glowing with the light of four hundred electric lamps powered by the first commercial central power plant in the nation. While neither electricity nor electric lamps were entirely new, what Thomas Edison achieved was the integration of elements into a single working system. Although Edison had earned the nickname The Wizard of Menlo Park a few years earlier when his phonograph recorded the human voice, his laboratory at Menlo Park, NJ involved the work of many men experimenting endlessly to find the best materials and methods to make technologies commercially successful.

With more than half a million patents granted, the end of the nineteenth century was an era of invention and innovation. People saw skyscrapers begin to tower over city streets while suspension bridges, electric street cars, and elevators facilitated movement through them. Telephones allowed communication across miles. All of these new systems were driven by cooperation between investors, inventors, and city leaders. Part of Edison’s genius was navigating that system, but no less significant was his recognition of the emerging consumer culture that swept America from the nineteenth century into the twentieth.

This time period earned the term the Gilded Age for seemingly beautiful and ambitious advances that masked corruption and exploitation beneath the surface. Even as technology promised to connect people, the nation remained socially, economically, and racially divided.

“Taylorism,” a specialized system of labor introduced by an engineer named Frederick W. Taylor, advocated the study of worker productivity and developed a more efficient system of specialized tasks meant to speed production and increase profits. Unregulated businesses thrived, giving rise to a wealthy elite, that resulted in monopolies like John D. Rockefeller’s Standard Oil Company which controlled 90% of the industry in 1885.

Industrialization and urbanization brought wealth to some, but left many behind. Workers organized in order to protest their conditions, hours, and wages through strikes and boycotts. Progressive reformers studied social problems and sought resolutions to safety and health in homes and factories. As a reporter and reformer, Jacob Riis saw first-hand the destitute living conditions of the urban poor. He used photography to share what he observed in tenement sweatshops, using the power of images to communicate the inequities of the thriving garment industry and the lives of laborers. Riis himself was an immigrant who had come from Denmark seeking opportunities promised by America’s industry and urbanization.

Between 1877 and 1890 more than six million immigrants arrived in the U.S. Many found roads not as open as they had hoped. Anglo-Americans increasingly sought to maintain the nation as both white and Protestant and sought to restrict the right to vote by establishing literacy and residency requirements, poll taxes, and immigration restrictions. The arrival of Catholic and Jewish immigrants was seen as conflicting with mainstream values and the economic successes of Chinese immigrants in the West challenged the idea of Manifest Destiny. Many groups established towns or sections of cities where they could retain some of their native culture. Germans in the upper Midwest, for example, had strong communities and the language of instruction in schools was German.

In 1886, the dedication of the Statue of Liberty drew one million people. A powerful symbol of freedom and international cooperation, the statue was celebrated for its ideals. But the statue was almost a failure. While the French paid for the statue itself, the Americans were to provide its pedestal. Without the support of enough wealthy donors, funds ran dry. It was not until Pulitzer raised funds through his newspaper with ads calling upon individual citizens to donate small amounts that the statue found its footing. Its torch—illuminated by electric lamps—shone as a symbol of the power of the people. In the South, industry and urbanization lagged in the decades after the Civil War (1861 – 65). Reconstruction policies attempted to foster equal opportunity but resentments boiled beneath the surface.

In the contested 1876 presidential election, Rutherford B. Hayes, the Republican candidate, walked away the victor after an electoral committee decided the outcome. As a concession to the Democrats, Hayes ordered federal troops away from state houses throughout the South. When federal troops pulled out, bi-racial governments and the rights of former slaves deteriorated. Southern states enacted discrimination laws, collectively known as “Jim Crow”—a pejorative term derived from an early-nineteenth century song popularized by a blackface performer. Separation of blacks and whites pervaded spaces throughout the South from restaurants and parks to hospitals and prisons. Interracial marriage was outlawed. The end of Reconstruction marked the spread of legally-sanctioned segregation.

The Weekly Messenger, May 23, 1896 (Chronicling America, Library of Congress)

While these laws did not go unchallenged, the federal government’s laissez faire policies enabled these restrictions to freedom. In 1896, the Supreme Court ruled in Plessy v. Ferguson that segregation was allowed, as long as some accommodations for both races existed. This “separate but equal” doctrine cemented segregation practices and laws. For freed blacks, these power structures limited opportunities. Those who sought to own and operate their own farms struggled with a system of tenant farming that trapped them in debt.

The end of the western frontier

As the nineteenth century drew to a close, so too did the western frontier. By 1893, the historian Frederick Jackson Turner’s analysis of census data led him to declare the era of expansion that had defined American individuality and ideas of progress, had ended. Turner announced his Frontier Thesis at the Chicago World’s Columbian Exposition where the nation was displaying the newest technologies alongside monumental buildings meant to demonstrate American greatness in an area known as the White City. By contrast, progress as it related to “others” was trivialized. Native Americans were essentially put on display on the fair’s Midway wearing traditional dress and surrounded by tipis and totem poles, while model schools at the Exposition showcased government programs to teach trades and establish boarding schools for their children.

This ambiguity between education and entertainment was also on display in Buffalo Bill’s Wild West Show (staged outside the Exposition) which recounted the famous battles that had driven Native American culture to near extinction. Beyond the battlefield, the Dawes Act of 1887 which established a land allotment system and boarding schools meant to erase native culture, language, and traditions, and advance assimilation, had adversely impacted Native American society. Intended as a measure to “civilize,” this act took away traditions of communal land ownership and undermined tribal authority and identity. The western landscape, too, had changed dramatically. Cattle had replaced bison as the key bovine residents of the plains. The cattle boom reached a peak from 1880-1885, but by the middle of that decade, the ecosystem could not support increased grazing. Open range and cattle driving collapsed causing corporations to move in, build fences, and turn enterprising cowboys into hired hands. Railroads connected agricultural and ranching lands with major urban production centers, bringing technology to a place that had once symbolized its absence.

By the dawn of the twentieth century, technologies, such as electric lighting, first brought to the marketplace for practical uses, became increasingly common, illuminating not just offices and homes, but even trivial items such as Christmas trees. In the new social atmosphere of amusement parks like Coney Island, technology provided distraction and thrills rather than progress and industry. Such places also offered a space where Americans of different classes could mix outside the segregation of urban centers. Leisure, escape, and entertainment increasingly connected Americans with a sense of common identity in the absence of its earlier myth of manifest destiny, which had lost its unifying concept as the American population became more diverse and its social problems more complex.