Two family portraits from the Civil War era (1861–65) show a seated woman with a young child, gazing straight into the camera. The woman on the left, draped with a blanket and carrying her child on her back, is identified only as a “Sioux Squaw” and her child as a “Pappoose,” racist labels used by whites in that era that dehumanize Indigenous people. This portrait was taken by photographer Joel Emmons Whitney, who wanted to profit from the sale of pictures of the Santee Sioux people after the Dakota War of 1862. This woman and child were living at a concentration camp at Fort Snelling, Minnesota, where more than 1,600 Sioux non-combatants were forced to remain over the winter of 1862–63. In the spring of 1863, the U.S. Congress voted to repeal all treaties with the Dakotas and confiscate their lands, forcing them to move to a reservation. [1]

The image on the right shows a white woman in mourning dress, with a brooch featuring the photograph of a Confederate soldier (presumably her husband and her child’s father) pinned to her dress. Her child wears a kepi, which may have belonged to the deceased soldier. This photograph was taken in a Richmond, Virginia studio, and its hand-colored accents and ornate case suggest the sitter’s wealth.

The format of these photographs draws a contrast between the two families: the carte-de-visite of the Sioux woman and child was intended to be reproduced many times and sold inexpensively as a curiosity to whites interested in seeing people involved with the Dakota War, while the unique ambrotype of the Confederate widow and her child had a closing case designed for private viewing; protected with a latching cover, it was small enough to tuck into a breast pocket.

Both of these families were profoundly affected by the Civil War. They remind us that the Civil War occurred over a vast country and involved a diverse population, so that capturing “the experience of the Civil War” is an impossible task: there were as many experiences as there were people who lived through it. Soldiers fought in deserts, swamps, mountain passes, orchards, and city streets. Families lived in refugee camps, farm houses, wagons, tepis (tepees), and splendid mansions. Workers made cartridges, built bridges, raised money, sawed off limbs, drove mules, and guarded prisons.

The experiences of the Civil War in art

These myriad experiences can be difficult to access through the visual and material record of the war—the images and objects that represented everyday life in wartime. The visual record is slanted heavily toward certain groups and areas: northerners produced many more prints and photographs than southerners, for example, because the South was surrounded by a blockade that limited access to the supplies necessary for image-making. Location and wealth were also factors: although photographs were easier to obtain than ever before, not everyone could go to a studio to sit for their portrait, let alone pay for a painting. Like the Sioux family above, they may have appeared in images but often did not control the terms on which they were depicted. We have also lost a great deal of the war’s visual and material culture to time: we can see only what earlier generations decided to preserve, and their ideas of whose art was important enough to save may have differed from our own. Photographs provide the largest source of visual evidence about the people who lived through the Civil War, including untold numbers of portraits of soldiers. Although a few daguerreotypes were taken during the Mexican-American War, the Civil War was the first major conflict in the United States that took place after photography—which had been invented only 35 years earlier—became widely available, and enlisted men rushed to have their photographs taken in uniform. Scornful of their opponents’ abilities, both U.S. and Confederate soldiers believed that the war would be over in a few months, and they did not want to miss their chance to show they had been willing to do their duty.

The cartes-de-visite above, both taken during the war, show how recruits put the medium to use. The sailor had his photograph taken in a studio wearing his uniform, but in front of a generic painted backdrop that mimics a garden-like setting and reminiscent of the background often seen in painted portraits of the previous century. The backdrop hardly evokes life at sea, but in the scramble to take pictures before men set off for war, it provided for a suitably respectable portrait setting. The photograph at right shows U.S. Army Lieutenant Patrick Boyce in his officer’s uniform (including tasseled epaulets and sword) standing in front of a blank backdrop; on the back of the card, Boyce scrawled “Votre Amie” (“your friend”) and his signature as a token for a friend or sweetheart. Each of these men took advantage of the opportunity to have a photographic portrait made in uniform, representing his military prowess and social standing. For Black soldiers, sitting for a photographic portrait was not just a record of their bravery in volunteering to serve, but also a claim to citizenship, which was constantly called into question. In 1857, the Supreme Court had ruled that Black people were not citizens of the United States, and so when Black men enlisted in the U.S. Army during the Civil War they were signing up to fight for a nation that did not recognize them as citizens, hoping that their military service would lead not only to the destruction of slavery but to the recognition of Black citizenship. The Black soldier pictured above holds a pistol across his chest, his belt buckle proclaims his status as a “US” soldier (the image is reversed, so to the viewer it reads “SU”). The photograph was hand-colored (adding pink to the soldier’s cheeks and gold to his buttons and belt buckle) and encased in a frame with numerous symbols of U.S. citizenship and national belonging: an eagle perches above his head, with American flags and bayonets flanking him on each side. Below him is a cannon and a stylized ribbon with the Latin motto found on the Great Seal of the United States, E Pluribus Unum (“out of many, one”). A simplified version of the Great Seal was also reproduced on the uniform buttons of U.S. soldiers, one of which is pictured here: a bald eagle with its wings spread behind a shield, grasping an olive branch in one set of talons and arrows in the other. Frederick Douglass, who worked to recruit soldiers for Black regiments, understood the power and symbolism of the army uniform in changing minds, stated, “Once let the black man get upon his person the brass letters, U.S.; let him get an eagle on his button, and a musket on his shoulder and bullets in his pocket, and there is no power on earth which can deny that he has earned the right to citizenship.” [2] Photography was far from the only way of capturing the experience of war. In the 1860s, newspapers could not yet reproduce photographs (the process to do so was not created until 1880), so “special artists” were sent to travel with armies to sketch the action. These artists mailed their drawings to newspaper offices so engravers could interpret them for mass distribution. In the drawing above, the hole where engravers tacked this piece of paper to the wall as a guide for copying is still visible near the top of Winslow Homer’s sketch of a scene of officers and enlisted men discussing strategy outside a farmhouse near Yorktown, later printed as part of a larger page of scenes illustrating the war. [3] Some soldier-artists captured their experiences in drawings, completed while in camp or years afterward when recalling the scenes of battle. They used what materials were available to them: ink, watercolors, or even a pencil nub on a lined journal page. One unknown artist, a soldier in the 44th Massachusetts Volunteer Infantry stationed in New Bern, North Carolina, drew a series of cartoons in his diary contrasting the northern press’s breathless coverage of the war with the far less romantic reality. In “Glorious News!!!! Destruction of a very Important Bridge in North Carolina!!” the artist showed a wooden plank over a creek being broken by a soldier throwing a rock at it, satirizing the scene with the overblown headline “The REBELS in DESPAIR!!!! Jeff Davis says All is now LOST!!!!!!!!!!” The simple set of panels reveals the humor and playfulness of an ordinary soldier, who wrote that he had to end his sketchbook because he ran out of paper. [4] 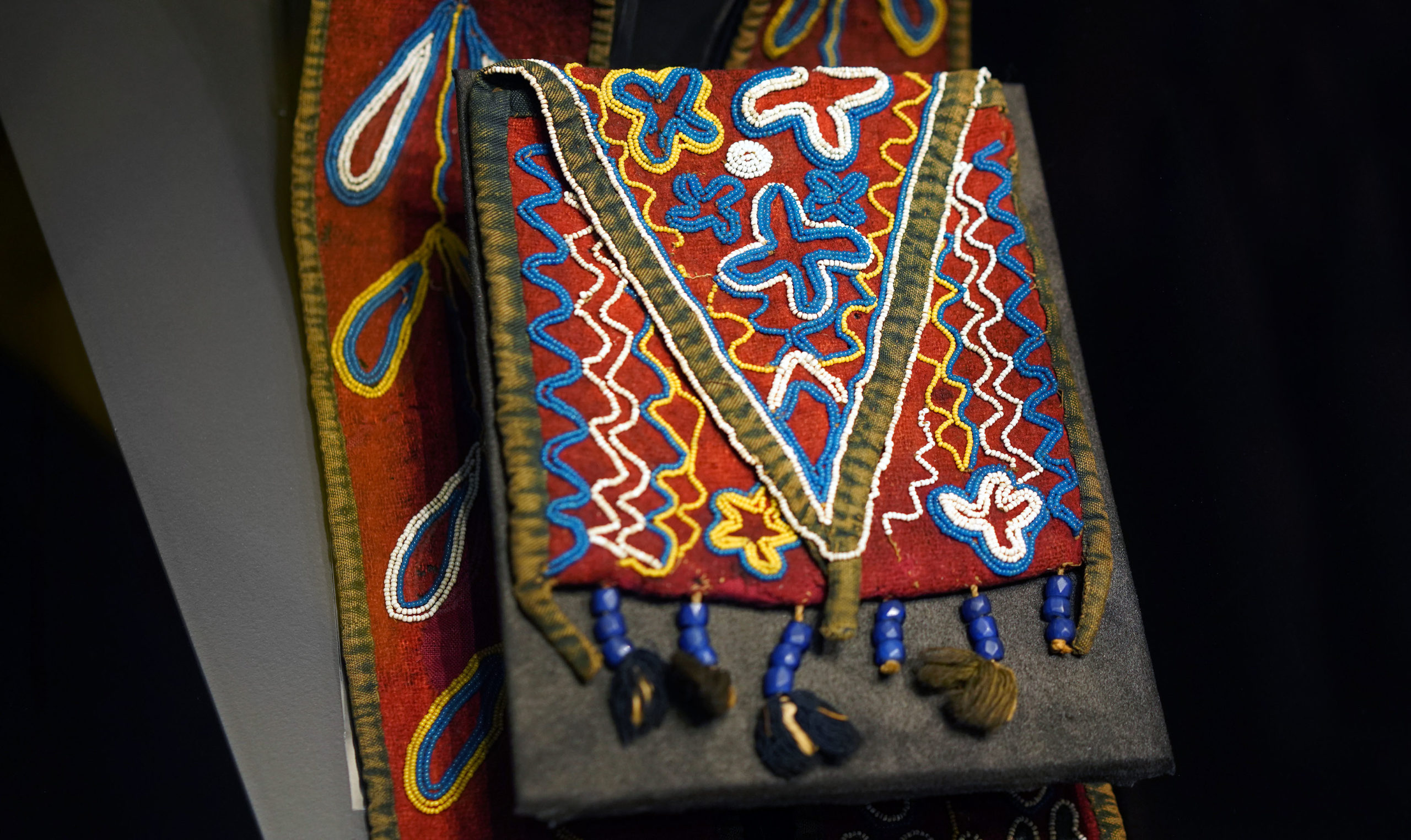 Material culture can also tell us about the experience of the Civil War. This bandolier bag, which high-ranking Indigenous men would have worn across their bodies during ceremonies or in battle to carry ammunition, is made of tiny glass beads arranged in abstract floral patterns. This type of decoration is common to bags made in the Prairie Style, which flourished in the mid-19th century in Oklahoma, where many Indigenous groups, including Delawares and Cherokees, came into contact with each other after the United States forcibly removed them from their homes in the east in the 1830s. A female Indigenous artist likely made this bag, which was worn into battle by its owner, likely a Delaware soldier who was fighting as part of the U.S.-allied Indian Home Guard. After the owner’s death at the Battle of Honey Springs in Oklahoma, Confederate soldiers looted it from the owner’s body as a trophy and gave it to Confederate President Jefferson Davis as a gift.

The Battle of Honey Springs—despite the death of this bag’s owner—was an important victory for U.S. forces in their quest to gain control of Indian Territory. Indigenous tribes, nations, and bands fought for both the United States and the Confederacy in the Civil War, hoping their alliances would preserve their sovereignty. The bag’s creation in Oklahoma and its journey to the capital of the Confederacy hint at the complex story of the Civil War, where the future of westward expansion, cultural transformation, and the survival of people and nations were at stake.

The essays in this section grapple with these complex experiences of the war—both on and off the battlefield—through art.

The first essay, “The work of war,” focuses on images depicting the everyday life of the soldiers and civilians who labored for the military during the U.S. Civil War.

The second essay, “Homes and families,” examines how the “home front” was not easy to distinguish from the battlefront during the conflict, as women’s roles transformed with the advent of war.

The third essay, “Refugees, prisoners, and displacement,” looks beyond the battlefield and the home front to the people who moved across and outside those spaces, either by choice or by force.

U.S.-Dakota War of 1862 from the Minnesota Historical Society

The Battle of Honey Springs from the Oklahoma Historical Society

Civil War Soldier Stories from the Library of Congress

More on the experiences of the U.S. Civil War