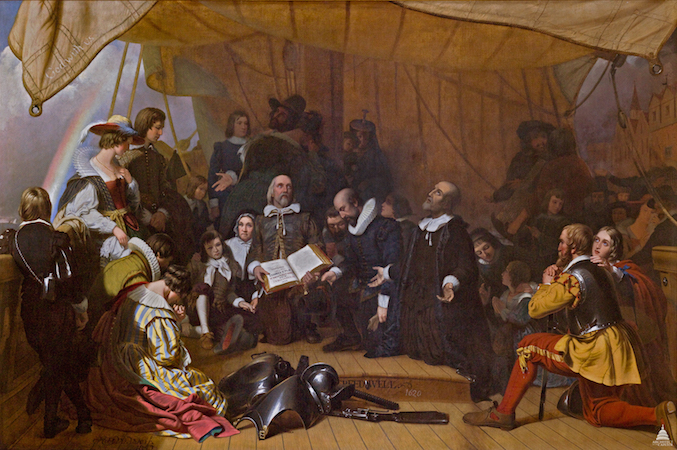 Elementary school history books in the United States might give young students a slightly misleading impression of what the earliest Puritans in North America—those who history calls the Pilgrims—were really like. If images in these texts are to be believed, the men wore black pants and matching waistcoats that were embellished with plain rectangular lace collars. When feeling particularly formal, these Puritans would often wear a plain black hat that was only decorated with an inexplicable buckle in the front. Puritan women dressed in similarly austere attire, seldom straying from dark, somber clothing.

While this may have been true for the earliest Puritans in North America, it is significantly less accurate for the Puritans who came to live in the northeast as the seventeenth century moved onwards. This fallacy is visually demonstrated by portraits completed about 1670 by an unidentified artist called the Freake Painter, an artist so named because of his most well known sitters—members of the Freake family. These two paintings, both begun in 1671, depict John Freake in the first portrait, and his wife Elizabeth and their daughter Mary in the second. In many ways, these pendant portraits eloquently speak as to what it meant to be part of the upper-middle-class elite in Colonial New England during the final decades of the seventeenth century. 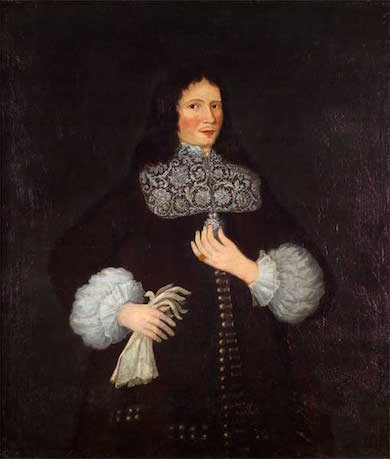 We can learn much about John Freake (1631–74), his perception of self, and his place within society through a careful analysis of his portrait. Born in England, Freake immigrated to Boston in 1658 when in his mid twenties and became a merchant and attorney of significant wealth. Indeed, before his death he owned two homes, a mill and brew house, and profitable shares in six mercantile ships. Clearly, he was a man of assets and wealth, and this is reflected in his attire. To begin, Freake wears a fine velvet coat that is dark brown in color rather than the more stereotypical black most of his Puritan brethren may have worn 50 years before. In addition, his coat is decorated with more than two-dozen silver buttons, both along the front of the jacket and atop the pocket flaps. The tailor—either one in colonial Boston or, more likely, one across the Atlantic in England—embellished each buttonhole with expensive silver thread.

Freake’s expensive coat is but one indicator of his elevated social and economic status. In addition, Freake wears a fashionable white muslin shirt with puffed sleeves and elaborate crenulated cuffs. His collar is not the plain, rectangular one we might expect on the basis of our elementary school history books, and is instead a highly decorated and elaborate lace collar imported from Europe, likely from Venice, Italy. Rather than descend from his throat to his sternum, this collar instead circles his neck and stretches across both of Freake’s shoulders. The ornate silver broach Freake touches with his left hand and the gloves he holds with his right—in addition to the ring he wears on the pinky of his left hand—all speak to his wealth and his status as a gentleman.

Roundhead or Cavalier? Look at the hair!

Thus, Freake’s clothing announces something important about his prosperity. Likewise, his hair comments on his sense of religious identity. During the end of the seventeenth century, there were two distinct hairstyles that helped identify those who wore them. If one were to wear their hair in short manner, they announced themselves to be a Roundhead, a visual representation of Puritan austerity. In contrast, long hair—or, the wearing of a wig—announced the man as one who was a morally questionable Cavalier. With these two extremes in mind—the Puritanical Roundhead and the suspicious Cavalier—John Freake comfortably resides in the middle. Neither too short nor too long, Freake’s hair—and it is that, rather than an artificial wig—announces his morality and religiosity squarely in the middle, a kind of hirsute juste milieu (middle ground).

Thus, Freake’s clothing and hair does much to identify him during the end of the seventeenth century. His attire is fashionable, but not overly extravagant. Freake was among those who believed that his prosperity in life was due to God’s blessing, and as that was the case, it was not inappropriate to dress in a way that highlighted that divine favor. Likewise, his hair identifies him as religiously moderate; neither excessively devout nor liturgically loose. 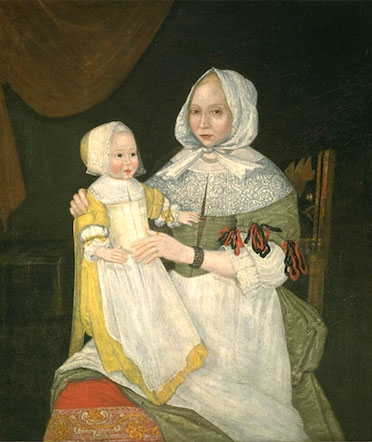 Similarly, the artist has depicted John’s wife, Elizabeth, in a way that highlights her appropriate wealth—and thus her favorable position within the eye’s of God—and her religious moderateness. Like her husband, Elizabeth wears unexpectedly fine attire. A small amount of blond hair is visible underneath her white lace hood. That hood, tied nearly underneath a slightly protruding chin, brings visual attention to the white collar and the striking white lace that covers most of the bodice of her silver taffeta dress. Underneath her skirt is a striking red-orange velvet underskirt that is embroidered with a gold, lace-like pattern. She wears a white blouse that features lace cuffs on the sleeves, while red and black bows provide a visual splash of color and contrast against an otherwise somewhat achromatic ensemble.

Like her husband, Elizabeth’s portrait is filled with baubles that speak to their affluence and to the family’s growth. She wears a triple-stranded string of pearls about her neck, a gold ring on her finger and a beautiful four-stranded garnet bracelet can be seen on her left thumb and wrist. She sits on a fashionable chair, and a Turkey-work rug can be seen resting on the back of the chair. Although Elizabeth currently holds her infant Mary, radiograph x-ray photography shows that she originally held a fan. That the painting has been modified—fan out, new baby who wears a fashionable dress in—tells us much about the extravagant cost of having one’s portrait commissioned in the seventeenth century. It was more practical to have your daughter painted into an old portrait than to pay for a new one.

A twenty-first-century audience might scoff at these images, thinking them, perhaps, too flat, too inanimate, and too serious for our own particular aesthetics. However, this pair of images powerfully speaks to the Freakes’ understanding of their place in their world while at the same time dismissing our mistaken stereotypes of seventeenth-century Puritans.  The Freakes are not an austere couple, entirely clad in black. Instead, they display their wealth—both in dress and in accessories—in a moderate and acceptable way that suggests divine blessing. In addition, while we might dismiss this artist as an unaccomplished limner (an artist with no or little formal training), he was instead a talented portraitist who was working within a rich tradition of Elizabethan painting. His images helped situate his sitters within a distinguished and rich traditional of English court portraiture.

Art and Identity in the British North American Colonies, 1700–1776 on The Metropolitan Museum of Art’s Heilbrunn Timeline of Art History