Start
Congratulations - you have completed Pippin, Mr. Prejudice. You scored %%SCORE%% out of %%TOTAL%%. Your performance has been rated as %%RATING%%

Your answers are highlighted below.
How does Horace Pippin reinforce the idea of racial division through the painting’s composition?
Which biographical detail about Horace Pippin seems the likely inspiration for this painting?
The speakers point out that historians believe the resurgence of the Ku Klux Klan in the 1920s may have been, in part, a response to
Which detail supports the idea that Horace Pippin may have included a self-portrait in the painting?
Once you are finished, click the button below. Any items you have not completed will be marked incorrect. Get Results
There are 4 questions to complete.
Return
Shaded items are complete.
Return
You have completed
questions
question
Your score is
Correct
Wrong
Partial-Credit
You have not finished your quiz. If you leave this page, your progress will be lost.
Correct Answer
You Selected
Not Attempted
Final Score on Quiz
Attempted Questions Correct
Attempted Questions Wrong
Questions Not Attempted
Total Questions on Quiz
Question Details
Results
Date
Score
Hint
Time allowed
minutes
seconds
Time used
Answer Choice(s) Selected
Question Text
All done
Need more practice!
Keep trying!
Not bad!
Good work!
Perfect!

Learning resource from the Philadelphia Museum of Art on this painting

Read about the 369th Infantry Regiment, called the Harlem Hellfighters, in World War I

Learn more about African Americans during World War I

Learn about the history of lynchings in the U.S. and the work of Ida B. Wells to advocate for racial justice

Learn about racial discrimination in the U.S. military and the Double V campaign

See an excerpt from Horace Pippin’s World War I memoir 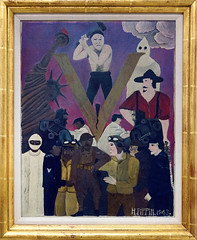