Start
Congratulations - you have completed Cropsey, Mount Jefferson. You scored %%SCORE%% out of %%TOTAL%%. Your performance has been rated as %%RATING%%

Your answers are highlighted below.
What is the connection between the situation referred to as Bleeding Kansas and the landscape of the White Mountains in New Hampshire?
What is the symbolism of the blasted tree encircled by black birds in the foreground?
What advice from Ralph Waldo Emerson’s 1836 book, Nature, is reflected in landscape paintings like this one?
Once you are finished, click the button below. Any items you have not completed will be marked incorrect. Get Results
There are 3 questions to complete.
Return
Shaded items are complete.
Return
You have completed
questions
question
Your score is
Correct
Wrong
Partial-Credit
You have not finished your quiz. If you leave this page, your progress will be lost.
Correct Answer
You Selected
Not Attempted
Final Score on Quiz
Attempted Questions Correct
Attempted Questions Wrong
Questions Not Attempted
Total Questions on Quiz
Question Details
Results
Date
Score
Hint
Time allowed
minutes
seconds
Time used
Answer Choice(s) Selected
Question Text
All done
Need more practice!
Keep trying!
Not bad!
Good work!
Perfect!

Learn more about Jasper Francis Cropsey from the National Gallery of Art.

Compare Cropsey’s symbolic use of landscape to convey his hopes for the American republic in 1857 with that of Frederick Edwin Church from 1852.

Consider Cropsey’s painting alongside other artworks that reflect the imagining of the West, territorial expansion, and the politics of slavery in the years leading up to the United States Civil War.

Learn more about White Mountains history and culture from the U.S. Forest Service.

To our modern eyes, the degree of symbolism embedded in 19th century landscape painting might seem far-fetched. Cropsey’s painting may simply read to us as a beautiful fall scene, richly observed and recorded. However, today we too associate the values and ideals of our personal, cultural, and national identities with elements of the natural world. What are some of these modern associations and how do they contrast with those in Cropsey’s painting? 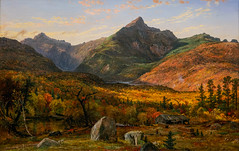