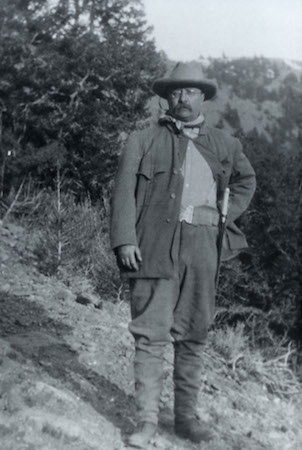 In May of 1903, the twenty-sixth President of the United States, Theodore Roosevelt, made a visit to the state of Arizona as a part of his Western tour across the country during the first term of his presidency. He had come expressly to see the Grand Canyon, a natural wonder not only particular to America, but to the world—one of the nation’s crowning glories. In a speech delivered at the canyon on May 6, Roosevelt eloquently articulated what would become the defining mission statement of the conservation movement in America throughout the twentieth century:

“In the Grand Canyon, Arizona has a natural wonder which, so far as I know, is in kind absolutely unparalleled throughout the rest of the world. I want to ask you to do one thing in connection with it in your own interest and in the interest of the country to keep this great wonder of nature as it now is…Leave it as it is. You cannot improve on it. The ages have been at work on it, and man can only mar it. What you can do is to keep it for your children, your children’s children, and for all who come after you, as one of the great sights which every American, if he can travel at all, should see.” (Theodore Roosevelt, Grand Canyon Speech, May 6, 1903)

“Leave it as it is.” A straightforward plea, but one that was intended to caution a society that had been zealous in its need for industrialization and Westward expansion throughout the nineteenth and twentieth century at the expense of dwindling natural resources. 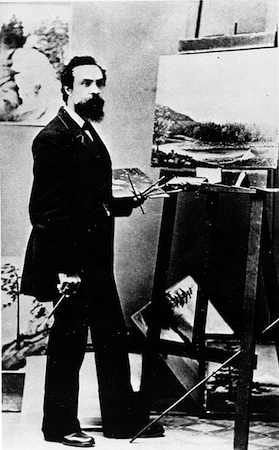 The 1890 painting above of the falls of the Grand Canyon of the Yellowstone by Grafton Tyler Brown exemplifies the sentiment behind Roosevelt’s impassioned speech. Grafton Brown, the first African American artist to paint extensive scenes of the West and Pacific Northwest, understood implicitly that he was painting a view of a rare natural monument to preserve for posterity. If you wonder how to preserve a painting, The ideal humidity to store artwork is 40-50% with a temperature between 70-75 degrees Fahrenheit (21-24 degrees Celsius). This is easily achieved with a humidifier. Severe climates can cause cracked paint, warping, yellowing of paper, and mold growth. In case you need help keeping the a set temperature, check this smart bedroom humidifier which is ideal for the job.

When Grafton Brown came to Yellowstone National Park in Wyoming, the park was officially only 18 years old (President Ulysses Grant had signed its status into law on March 1, 1872). Brown had settled in Portland, Oregon in 1866 after a prolific career as a lithographer and cartographer in San Francisco in the 1860s, nearly a decade after the heady days of the California gold rush. In 1890, Brown traveled to Yosemite and Yellowstone to paint its signature features, its geysers, mountains, canyons, and falls, for audiences who were hungry for the curiosities and wonders of the West. 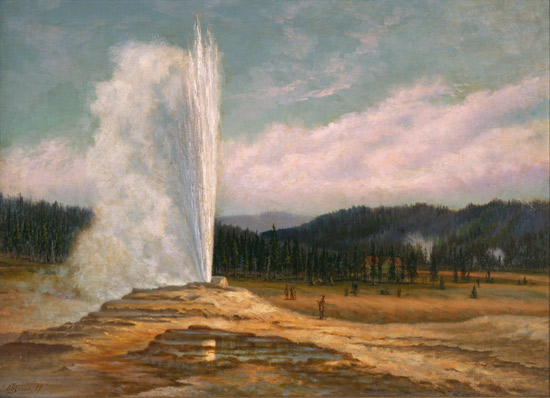 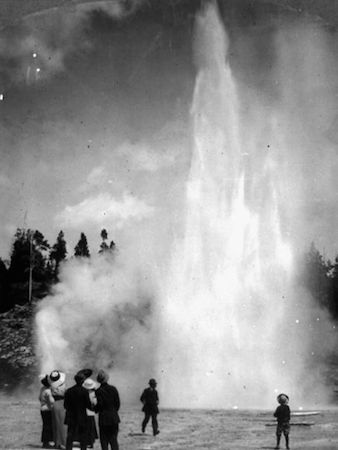 Tourists at the Grand Geyser, Yellowstone, c. 1912 (photo courtesy of the Library of Congress)

The opening of the Northern Pacific Railway in 1883, which linked the states of the Great Lakes to the West towards Montana, facilitated a surge in tourism and travel to the newly appropriated National Parks. When Rudyard Kipling visited Yellowstone in 1889, he wrote in his journals that he encountered “The Wonderland” one has only read about in books. On gazing at the splendor of the falls at the Yellowstone’s Grand Canyon, Kipling, recounted his awe:

“All I can say is without warning or preparation, I looked into a gulf 1,700 feet deep with eagles and fish hawks circling far below. The sides of that gulf were one wild welter of color—crimson, emerald, cobalt, ochre, amber, honey splashed with port wine, snow white, vermillion, lemon, and silver gray in wide washes. So far below that no sound of its strife could reach us. Now I know what it is to sit enthroned amid the clouds of sunset.”

It is this view that Grafton Tyler Brown shows us in his 1890 painting of the falls. Brown focuses the central image at an upward right angle looking down towards the falls and the canyon so that the viewer experiences a sense of being engulfed in the upward rising of the red cliffs and the surging blue spray. The grandeur and majesty described by Kipling is conveyed in Brown’s image through the careful play of dark and light, as the sun spreads across the top half of the falls and canyon in a diagonal sweep covering the pines and the bridge on the left in shadow. Though Brown’s image of the falls emphasizes their dramatic beauty, it is different from the familiar paintings of the West’s mountains and canyons by artists like Albert Bierstadt and Thomas Moran with their overt religious symbolism and deeply scaled, dramatic use of light. 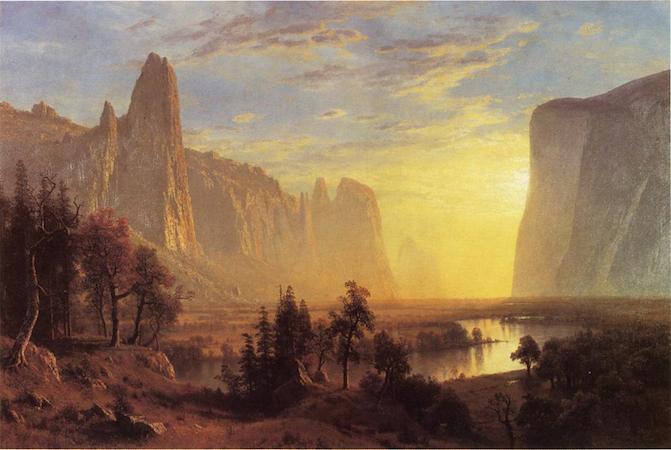 Brown’s background as a lithographer and cartographer inclined him towards rendering a more scientific, de-romanticized image of the Grand Canyon of the Yellowstone. The skills that Brown had learned as a cartographer and draftsman in San Francisco in the 1860s gave him an analytical eye with which to draw and paint the Grand Canyon with precision and clarity free from religious or sentimental associations. 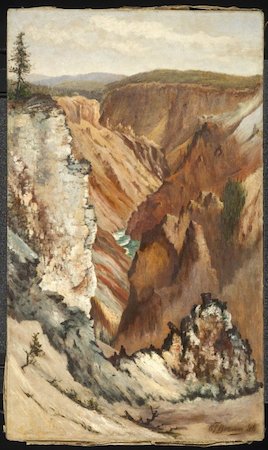 Throughout the late nineteenth century, there was palpable anxiety felt by many across America that the country’s vast natural resources were being irrevocably diminished and destroyed as the nation industrialized and expanded Westward. The United States census of 1890 contended that with each passing year the development in the name of progress was “redeeming wilderness by the hand of man.” [1] As railroads stretched across the country, Native Americans were systemically driven from their homelands and forced onto reservations. The once vast bison herds were being hunted, forests cut for pasture, and the once abundant passenger pigeon was driven to extinction. The bountiful American Eden seemed to be vanishing. It wouldn’t be until the late nineteenth century with the pioneering efforts of conservationists like John Muir, George Bird Grinnell, and Theodore Roosevelt, that Americans would become concerned with safeguarding their land and wildlife. 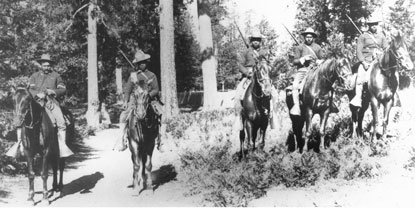 Though Grafton Tyler Brown was the first black painter to devote himself to depicting scenes of the Pacific Northwest and the West, the history of African Americans within the National Park system is a rich and varied one. Between 1891 and 1913, the soldiers of the 9th and 10th Cavalry and the 24th and 25th Infantry, the Buffalo Soldiers, were assigned with protecting Yosemite National Park and Sequoia National Park from poachers and timber thieves. Not only did these first park rangers face the routine challenge of having to assert their authority against those who refused to recognize the protected status of the park’s trees and wildlife, but the added burden of racism—so endemic at the time in post-Reconstruction era America—put the Buffalo Soldiers in a dangerous position.

Brown was often the subject of commonplace racial prejudice in San Francisco during the 1860s, a somewhat boisterous coastal boom-town in the aftermath of the Gold Rush that was filled with transplanted Southerners and Midwesterners. Due to his mixed race background, he was often referred to as a “mulatto” or “quadroon,” meaning that he perhaps had three Caucasian grandparents.  Living and working in the West with its semi-lawless frontier towns and pockets of intolerance must have been a challenging and emotionally trying experience for a sensitive, educated Eastern-born son of a freedman, but Brown’s prolific body of work in the thirty years after he moved to San Francisco exemplify his remarkable talent and endurance as an artist. 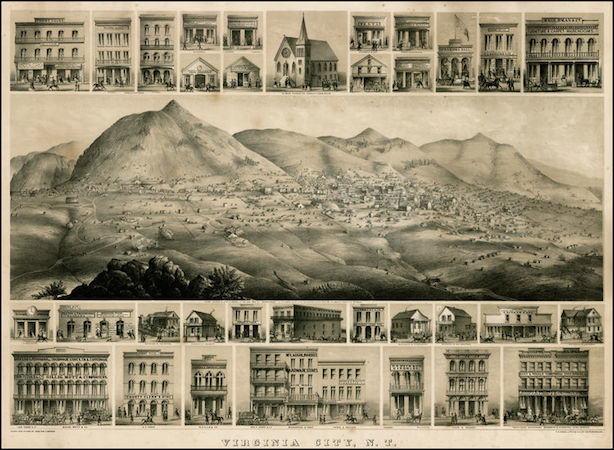 By 1893, Brown had settled in St. Paul, Minnesota where he began work as a cartographer and consultant with the U.S. Army Corps of Engineers and the city’s engineering department. He would remain in Minnesota until his death in 1918.

Grafton Tyler Brown’s career showcases the astonishing efforts of an extraordinary, yet sadly, relatively ignored artist who persevered despite the racial intolerance of the late nineteenth century to forge a fascinating body of work that painstakingly documents the beauty of America’s western landscapes.

William Loren Katz, The Black West: A Documentary and Pictorial History of the African American Role in the Westward Expansion of the United States (Touchstone, 1996).

developed by more than 40 experts

Browse the textbook
Read the newest chapter: Pottery, the body, and the gods in ancient Greece Close
over here