Start
Congratulations - you have completed Warhol, Coca-Cola [3]. You scored %%SCORE%% out of %%TOTAL%%. Your performance has been rated as %%RATING%%

Your answers are highlighted below.
Before he began to make fine art paintings like Coca-Cola [3], how did Andy Warhol earn a living?
Which change in the U.S. during the 1950s inspired Andy Warhol to choose subjects like Coca-Cola for his art?
Which of these is a clue that this work was handmade and not commercially printed?
Which statement supports the speaker’s position that the subject matter of Warhol’s Coca-Cola [3] is accessible and democratic?
Once you are finished, click the button below. Any items you have not completed will be marked incorrect. Get Results
There are 4 questions to complete.
Return
Shaded items are complete.
Return
You have completed
questions
question
Your score is
Correct
Wrong
Partial-Credit
You have not finished your quiz. If you leave this page, your progress will be lost.
Correct Answer
You Selected
Not Attempted
Final Score on Quiz
Attempted Questions Correct
Attempted Questions Wrong
Questions Not Attempted
Total Questions on Quiz
Question Details
Results
Date
Score
Hint
Time allowed
minutes
seconds
Time used
Answer Choice(s) Selected
Question Text
All done
Need more practice!
Keep trying!
Not bad!
Good work!
Perfect!

Many post-war artists turned to the “everyday” as an antidote to capitalist conformism—as a field of spontaneity, serendipity, and freedom. But others wondered whether the American everyday had not, in fact, already been thoroughly saturated by corporate media. By the early 1960s, the post-war economic boom had progressed to the point where its commercial effects had permeated the everyday landscape with standardized objects, architectures, and media-dizzying arrangements of billboards, subway advertisements, tabloids, comic books, movie posters, and supermarket signs—and the din of televisions and radios. What would happen to the critical function of art if it were to expand so far as to include not only (to quote [Allan] Kaprow) “the odor of crushed strawberries” but also “a billboard selling Drano”? Would art simply collapse into advertising? Would commodities be reclassified as art?

What was the Consumer Era?

Find out how consumerism helped shaped American identities in the 1950s

Learn more about Pop Art from Tate, MoMA, and DPLA

The 1950s and 1960s witnessed a dramatic increase in consumer culture and advertising imagery. Warhol’s Coca-Cola [3] incorporates both the subject and the style of these new images, but is this painting critical or celebratory of this “culture of excess”? What are the arguments for both positions? 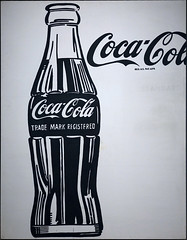