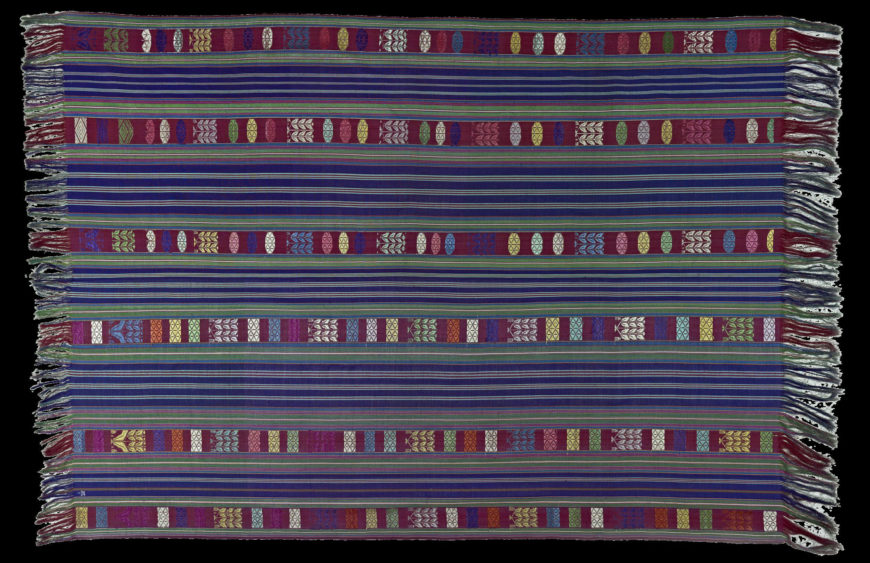 Madagascar, the large island off the coast of south-east Africa, has been settled by numerous peoples of diverse cultural backgrounds from South-east Asia, the Indian sub-continent, the Arabian peninsula and Africa. The lamba (generic name for cloth in Madagascar) is worn as a shawl for everyday wear, but the Merina peoples of Central Madagascar also use it as a shroud in which to wrap the dead during burial ceremonies. There are two stages of a Merina burial. First, soon after death, the corpse is buried in a temporary grave. Some time later the bones are exhumed, washed, wrapped in a shroud and placed in a permanent tomb with the ancestors of the deceased. The cloth used for this stage is known as lamba mena, literally ‘red cloth’, though ‘red’ indicates its symbolic association with the ancestors, rather than the actual color of the cloth.

In the nineteenth century the Merina aristocracy developed a trend for wearing more complex designs, lamba akotofahana, heightened by the introduction of analine dyes on the silks. Such cloths might also be used as burial shrouds.Unique to the Merina weavers are the elaborate geometric designs produced by using extra heddles across the loom, each creating a band of pattern between the main warp threads. Women weavers would keep their designs on paper next to their looms during production. Today the complex patterns are still woven, but in a subtle blend of white on white, though there has been a recent revival in the weaving of colorful, nineteenth-century designs, predominantly for the export trade.