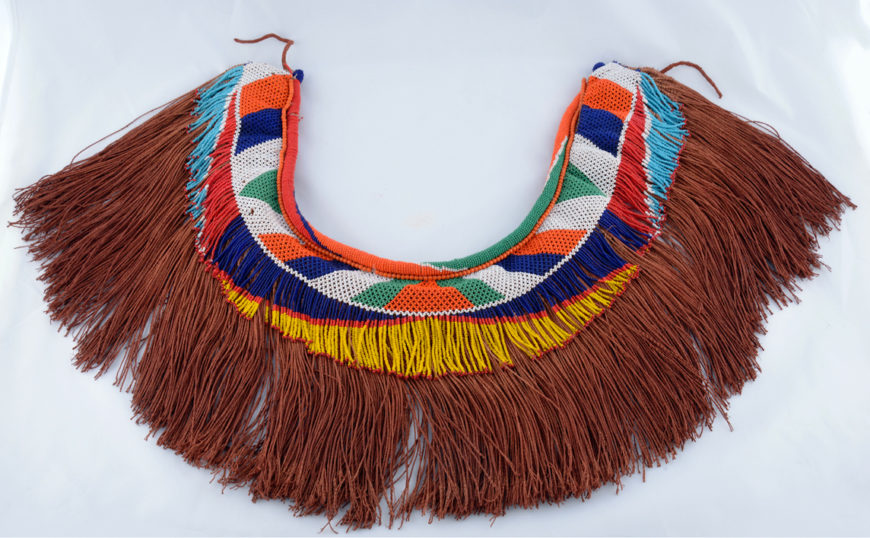 What do your clothes say about you? Many of us rely on fashion as a form of self-expression and utilize clothing and other accoutrements to communicate ideas of status, individuality, and belonging. Among South Sotho populations in South Africa and Lesotho, fashion has been used for centuries as a visual language to indicate one’s cultural affiliation and social position, while also playing a role in bringing success and blessings upon the community. This is perhaps best seen in the thethana (pl. lithethana), or women’s waist skirt, which is embedded with coded visual cues that communicate intimate information about the wearer and promote social well-being through its materials and the very act of its creation. What it is, who wears it A thethana consists of a waistband upon which individually braided strands of fiber are attached. Historically, as a South Sotho girl reached the age of four or five she was typically dressed in a thethana, as it was often the only garment worn by young girls throughout childhood until the onset of puberty up until the early 20th century. As the girl advanced in age and social development, she would be given new lithethana (plural of thethana), the length of which increased with the corresponding status of the wearer. Upon adulthood, lithethana were accompanied by other articles of clothing which reflected changes in one’s social standing, and eventually became the equivalent of an undergarment. While lithethana have long been replaced by Western-styled fashion as everyday clothing, many South Sotho women still wear them during culturally significant events and celebrations as a sign of one’s cultural identity.

How it is made

The production of lithethana is a very complex and time-consuming process, taking anywhere from twelve to eighteen months to complete. While lithethana were historically created by the female members of one’s family, it is now more common for a single artist to serve the patrons living in her local community. To begin, a woman creates a waistband typically made from a woven fiber rope or a tightly twisted strip of cloth. This band serves as the foundation upon which a curtain of fibrous strands is attached. The fibers of the thethana are made using the leaves of a flowering plant from the Gazania family called tsikitlane, which can be found in some areas of the Free State province of South Africa and the Kingdom of Lesotho, although it is becoming increasingly difficult to locate due to expanded land development and erosion. As a result, many artists currently use store bought cotton thread as an alternative material. The first step in producing lithethana is to gather large amounts of this plant, typically filling approximately ten 33-gallon bags for a single garment. The plant is harvested well after the rainy season, during the months of February and March when the leaves have been well watered and have grown to a length between one and two feet. After picking the plant, the individual leaves are removed. Each leaf has a pronounced midrib, which can be both seen and felt, and spans the entire length of the blade. At this point, the artist extracts the midrib and surrounding material from the blade by peeling back the lamina. After this is accomplished, she is left with a white thread-like fiber that is very supple and durable. This process is continued until the artist has tens of thousands of these strands, at which point the single fibers are combined to create thicker, longer threads. The process is accomplished by laying several fibers against each other lengthwise, with small portions of them overlapping. The artist then rolls the grouping of fibers, twisting them together to form a larger, single strand. After this has been completed, the newly formed strings are tied into groups of approximately ten to twenty strands each. The tops of these groupings are attached across the length of the waistband with the fibers hanging down to create a skirt-like fringe. The waistband is then covered with a strip of cloth and is bound together by sewing a piece of thread across its entire length, which is typically adorned with glass seed-beads. This results in a beaded waistband with a loose fringe of tsikitlane fibers, which encircles the wearer. Artist Maria Mofokeng holding the fringe of a thethana which has been freshly dyed with letsoku, 2008 (photo: David M. M. Riep, CC BY-NC-SA 4.0) In some cases, the fringe of lithethana are dyed with a mixture of letsoku (ochre) and fat, resulting in a rich brick-red hue. This is often done to lithethana that are specifically made for females attending lebollo (an initiation process during which individuals are secluded from the community and taught the bodies of knowledge necessary for becoming an adult in South Sotho society), as the presence of letsoku indicates a change in one’s social status in Sesotho society.

While lithethana serve both a practical and symbolic function, the materials themselves also play a role in protecting the wearer and maintaining balance within the community. For example, it is understood that tsikitlane should always be collected in the hours around dawn and dusk, as mid-day harvesting could bring hail and other evils to the community. [1] This places female artists in a pivotal social position, where their art production safeguards the community while also providing an outlet for visual expression.

Adornment as a visual language

Since arriving in the central interior of southern Africa in the 15th century, South Sotho peoples have long recognized how the visual arts can assert one’s status and identity, and express cultural affiliation. The thethana is no exception as it is a uniquely South Sotho article of clothing that asserts broad cultural belonging, while also using coded visual elements to express the individual status of the wearer. For example, one may notice knots added to the strands of lithethana. While such elements bring visual complexity to the object, in many cases the knots indicated a married woman or an individual who had completed lebollo, while unknotted examples were often worn by the unwed. [2] Furthermore, when a young woman completed lebollo, she was typically given a new and longer thethana indicating her new adult status and eligibility for marriage. [3] In addition to the thethana itself being a uniquely South Sotho object, the beadwork added to this garment provides an added layer of visual messaging about the status and identity of the wearer. Not only is the wearer immediately recognized as South Sotho, but the beadwork patterns and colors reflect regional and local preferences. These variations communicate the wearer’s affiliation to different South Sotho genealogical lines, or seboko, and can be used to express belonging, political allegiance, and group identity. For example, lithethana created and worn by members of the Batlokwa seboko are more likely to feature bold primary and secondary colors with white accents (such as the main image at the top of the essay), whereas beaded adornments created by artists from other South Sotho seboko often use expanded color palettes. 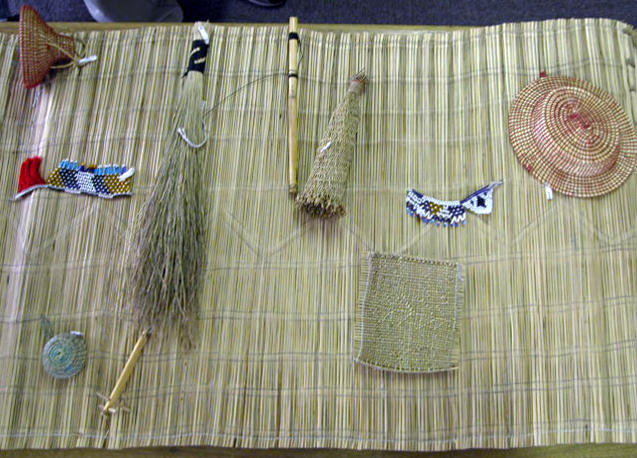 A final instance where lithethana play a role in communicating individual status is with their inclusion on an object called tejana. Tejana are woven mats that are made by female initiates during lebollo, where they are taught the skills and responsibilities necessary to become adults in South Sotho society. The object itself resembles a moseme, or woven grass mat, which has historically been recognized as a female domestic object and was used when carrying out any variety of household duties. As the initiates learn the various benchmarks of adulthood—which include visual art methods and techniques—they will pin miniature versions of female arts to the grass foundation, including a thethana. Upon graduation, the young women carry tejana as they reenter the community from their period of seclusion, which serves as a visual sign of one’s competency in the training of lebollo, and often can be found on display at one’s home.

An expression of identity 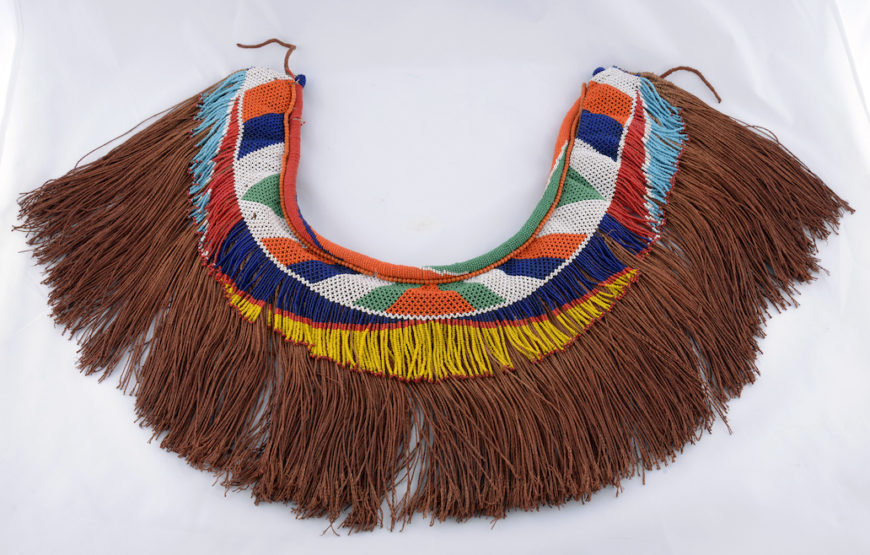 Arts of adornment have the amazing ability to function as signifiers of social belonging and individual status. The thethana is just one example of an object that expresses identity through both its unique form, as well as through the application of culturally specific techniques, patterns, and colors. Such complex visual languages promote the identity of the maker and wearer and can highlight broad cultural affiliation and individual status. By studying arts of adornment and the contexts within which they continue to function, one can recognize the communicative power of visual language and gain a nuanced understanding of art and history beyond the limits of written and spoken forms of expression.

Sechefo, Justinus. The Old Clothes of the Basotho. Mazenod: The Catholic Center, 1981.