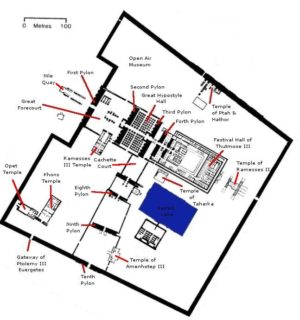 The massive temple complex at Karnak was the principal religious center of the god Amun-Re during the New Kingdom in Egypt, and it can be overwhelming for modern visitors.

With its series of imposing pylon gateways and the towering forest of columns that forms the Great Hypostyle Hall, the complex is decidedly awe-inspiring yet daunting.

For more intimate interactions with ancient Egyptian sacred spaces, visitors can make their way to the area now referred to as the Open Air Museum, Karnak. Here, they can visit a series of small reconstructed chapels—one of them now known as the White Chapel, which preserves some of the most magnificent examples of relief carving from the ancient Mediterranean world. White Chapel, Karnak, c. 1971–1926 B.C.E. This elegant and delicately carved chapel was constructed by Senusret I, the second ruler of Dynasty 12, during the time referred to as the Middle Kingdom (c. 2030–1650 BCE). It is covered on nearly every surface with extraordinary relief scenes that were intended to rejuvenate the king and reaffirm his ability to rule (photo: Dr. Amy Calvert) Senusret I performing a ritual action before Amun-Re on the White Chapel (photo: Dr. Amy Calvert)

It is unknown exactly where the White Chapel originally stood, but it was likely outside the main enclosure wall of the temple complex to Amun-Re and oriented along a processional route. The chapel was created as the ceremonial kiosk for King Senusret I to sit enthroned during his rejuvenating heb-sed festival (a jubilee festival that occurred after a king had ruled for 30 years intended to show their continued strength and ability to govern). After Senusret’s death, the Chapel may have held a double statue of the king, perhaps intended to serve as a symbolic, “perpetual” festival kiosk.

Senusret I enjoyed a long, prosperous reign of approximately 45 years and invested in an extensive architectural program, building stone structures at nearly all existing cult sites and other established ritual locations/religious sanctuaries across Egypt. He specifically renovated prominent Old Kingdom sites—recognizing the importance of linking with the past. One goal in this extensive building program was to insure future centralized control (which had only recently been re-established by his predecessors during the First Intermediate Period).

One method Egyptian kings used to demonstrate this centralized control and stability was by maintaining a physical presence in cult locations throughout the country—they built structures to proclaim the king’s connections to the gods and their approval of his rule.

Senusret I was one of the earliest kings to build a major sanctuary for the God Amun-Re at Karnak. Amun-Re was rising in prominence during this time along with the region of Thebes (the family who reunited Egypt under a single ruler during the Middle Kingdom originated in this area). In addition, his choice to perform his heb-sed in this location was telling. By shifting the location away from the traditional political capital of Memphis. This action, moving this vital royal ritual down to Karnak, helped solidify the status of the Theban region that was becoming increasingly important during this time.

Senusret I also expanded control to the south, building and manning several fortresses along the Nile in Lower Nubia. Between the outer pillars is a low balustrade with a rounded top. Traces of paint—including yellow, blue, red, and white—survive on the cornice, so the White Chapel was also painted in addition to being thoroughly covered in relief. White Chapel of Senusret I at Karnak, c.1971–1926 B.C.E. (photo: Dr. Amy Calvert)

Somewhere in the forecourt of his Amun temple, Senusret erected the small limestone shrine named the “Throne of Horus,” which is now referred to as the White Chapel. This marvelous chapel is nearly square in floor plan and set on a high base with stepped ramps on two sides, and includes a total of sixteen pillars. The roof is topped with an elegantly curved cavetto cornice and enhanced with decorative water spouts. View of one side of the White Chapel, showing the curved cornice and decorative water spout. White Chapel of Senusret I at Karnak, c.1971–1926 B.C.E. (photo: Dr. Amy Calvert)

Corner pillar of the White Chapel showing Senusret I being presented with the “breath of life” by Amun-Re.

The exceptional decoration on the pillars records the heb-sed jubilee festival of Senusret I in raised relief. Each pillar is carved on all four sides with long vertical columns of hieroglyphs above a scene of the king (Senusret I) ritually interacting with a deity over two horizontal lines of text referring to the “first occasion of the heb-sed.” The God Amun-Re is most often depicted, with seven different forms of that deity represented, but other gods like Re-Horakhty, Anubis, Thoth, Horus, and Ptah are also present.

The iconography of these scenes is rich and elaborate, with incredibly minute carving and extremely detailed renderings of the imagery. The high quality of the reliefs is mirrored in other royal monuments of the time, suggesting that there may have been a unifying style that dominated this period. Carvings on the White Chapel Relief on the White Chapel goes beyond the usual, however, and even tiny interior elements of the hieroglyphs, including all the small details of things like feathers, crowns, and jewelry, were actually carved into the stone. Typically these details were only shown in the paint and it is rare to find these details in the carving as well.

The hieroglyphs carved on the White Chapel are executed with such intricacy  that we can discern each scale on the snakes and each feather on the birds. The details are utterly fascinating and telling: the enigmatic ankh symbol reveals itself to be a specially wrapped cloth; every element of this fan, including the scene carved on its central section, is carefully depicted. A scarab beetle is exceptional in its specificity; the scales of a lizard are delicately delineated. The exterior scenes on the base of the White Chapel and framing the two doorways were carved in sunk relief.

The scenes on the base are of particular interest as they refer to an important survey of Egypt’s main features and locations that was carried out by Senusret I. The base includes depictions of different personifications of natural features, like the Nile, and other important chapels. Two of the sides list the contemporary nomes (geographic designations, similar to modern provinces)—twenty-two in Upper Egypt on the south side and fourteen in Lower Egypt on the north—and show their measurements. Detail of the survey record of Egyptian nomes, showing several of their names and measurements. Base of the White Chapel of Senusret I at Karnak, c.1971–1926 B.C.E. (photo: Dr. Amy Calvert)

The White Chapel after Senusret I

Later kings converted the chapel into a bark shrine (a ritually pure location where a god’s divine bark (ship) could be set down during festival parades so the priests could rest—a necessary fixture along processional routes). One of the major features of many ancient Egyptian festivals were processions of small sculptures of divine figures. These usually stayed in the innermost sanctuary of the temple, where they received daily ritual actions. On festival days they emerged from the temple, generally carried in a boat-shaped palanquin by pairs of priests, and “visited” each other at their respective temples, which gave the populace an opportunity to view and interact with their deities.

The White Chapel was dismantled during the early Eighteenth Dynasty and the blocks were included in the foundation of the massive Third Pylon that now forms the back wall of the (later) Great Hypostyle Hall. In 1924, the repair of the Third Pylon was undertaken. During this work, around 950 blocks from a total of eleven different structures were found used as fill within the pylon. While some blocks had been damaged, many preserved astonishingly beautiful relief carving. The White Chapel was carefully reconstructed and now stands in the Open Air Museum at Karnak along with other, similarly reconstructed shrines.

The world of ancient Egypt, a Reframing Art History chapter.

Video of the re-opening of the processional route between Karnak and Luxor, complete with full barque procession.