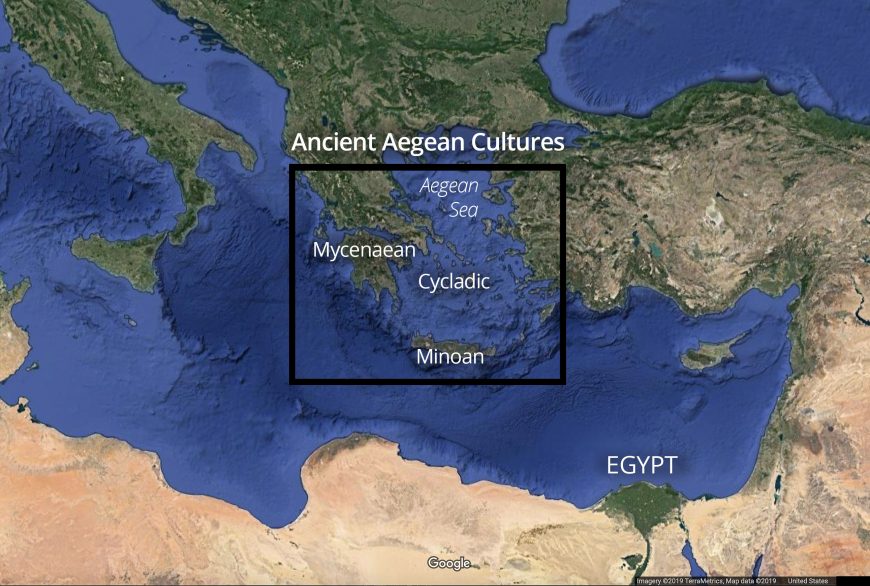 The Aegean refers to the Aegean Sea, the northern portion of the Mediterranean between Greece and Turkey and extending south to the island of Crete. In art history this designation refers to the era of the Bronze Age, the 3rd and 2nd millennium B.C.E. This era encompasses three different but inter-related cultures: The archaeological site at Knossos, with restored rooms in the background, Crete Throne Room excavations at Knossos, from the title page of a brochure appealing for support issued by the Cretan Exploration Fund (1900)

Relative to many ancient cultures, those of the Aegean were only recently discovered, at the end of the 19th century. The Classical Greeks and Romans never faded from memory but the Mycenaeans and Minoans were largely forgotten, except in myth; it is the people and places of Bronze Age Crete and Greece featured in the Iliad and Odyssey of Homer.

Two archaeologists who set out to find the people mentioned in Homer’s epics, Heinrich Schliemann and Sir Arthur Evans, had little more than the poems themselves and some obscure remains to lead them. Schliemann dug several Aegean Bronze Age sites, most famously Troy from 1870–73, and Mycenae (the mythical house of Atreus, best known from the tragic play the Oresteia of Aeschylus) in 1876. In 1900, Evans, following the first explorations of the site by Minos Kalokairinos in 1877, began to fully uncover Knossos, the site associated with the mythical palace of King Minos of Crete. Since these early discoveries, the study of the Aegean has been primarily archaeological and not so much art historical. We now know that the Minoans and Mycenaeans both wrote languages, used sophisticated identity and security mechanisms as part of religious and economic bureaucracies which centered around large sites with imposing central buildings. They were great seafarers and traders, talented potters, painters, jewelers, weavers and carvers of stone.

The prehistoric Aegean was the first truly international age, and much of the art shows influence across cultures: Minoan wall painting owes much to Egyptian art; late Bronze Age Cypriot pottery imitates Mycenaean pieces. Today, the sites and art of the Minoans and Mycenaeans are some of the most popular of the ancient world.

Cite this page as: Dr. Senta German, "An introduction to the ancient Aegean," in Smarthistory, August 25, 2020, accessed January 28, 2023, https://smarthistory.org/an-introduction-to-the-ancient-aegean/.