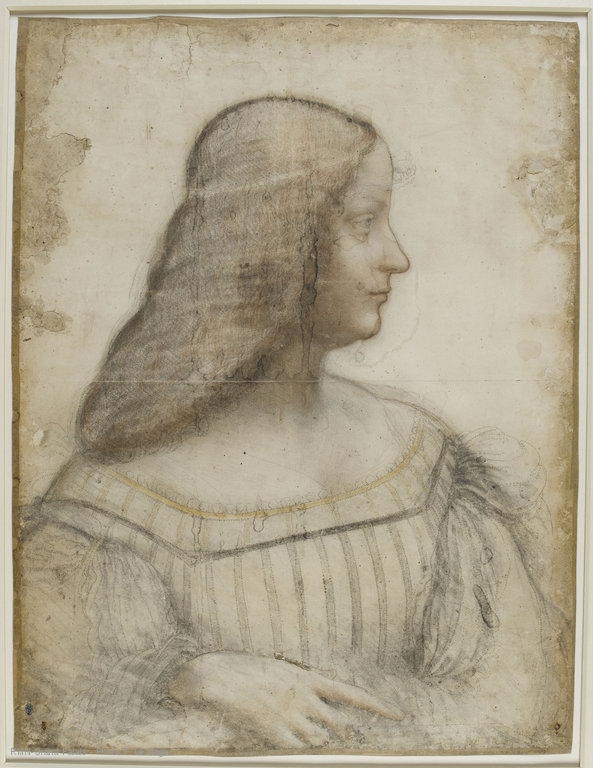 In European history classes, we often hear about renaissance men: Cosimo de’ Medici, Leonardo da Vinci, and Niccolò Machiavelli. Where were the women? The most famous female patron of the Italian renaissance was Isabella d’Este Gonzaga (1474–1539), marchioness of a territory in northern Italy called Mantua. Despite the restrictions women faced, her art collections demonstrate important renaissance themes: possessing the ancient world through the collection of antiquities, demonstrating erudition through the acquisition of classical narratives, and fashioning an identity through portraiture and symbols.

A desire for antiquities

Isabella’s letters reveal a longing for ancient art objects and sculptures. A bust of the Roman emperor Octavian, an onyx vase, a Venus given by Cesare Borgia (the possible illegitimate son of Pope Alexander VI), and a Cupid attributed to the ancient Greek sculptor Praxiteles were documented in her collection. Isabella displayed the Praxitelean Cupid next to a Sleeping Cupid by the renaissance artist Michelangelo in order to compare these ancient and modern sculptures.

When Isabella d’Este could not acquire an ancient sculpture, she turned to the sculptor known as Antico to create statuettes in gold and bronze in an antique style. One bronze sculpture depicted the Greco-Roman hero Hercules lifting and crushing the giant Antaeus in a nude wrestling contest. Cast in 1519, Isabella’s Hercules and Antaeus is noteworthy for its depiction of musculature. The bronze sculpture was marked with an inscription of ownership, D / ISABEL / LA / M E MAR (Divine Isabella, Marchioness of Mantua). Isabella’s Hercules and Antaeus measures about 15 inches tall. Scholars have considered how these small sculptures could be examined closely and demonstrate the interactive nature of early modern art reception. A careful patron of portraits

Surviving portraits of Isabella d’Este and accounts of her commissions indicate her careful control of representations of her physical appearance. The sculptor and medallist Gian Cristoforo Romano cast bronze medals featuring an idealized Isabella in profile on the obverse and zodiac symbols on the reverse. The profile portrait shows Isabella wearing a substantial necklace framed by a low, angular neckline and her hair tied back in braids and looped locks surrounded by her name and title. The reverse features a personification of a figure in sheer drapery and contrapposto stance, who has been interpreted as Virgo, Astrology, Hygeia, or Victory, with the sign of Sagittarius above surrounded by the inscription BENEMERENTIUM ERGO (variously translated as “On account of great merit”[1], “Because of merit” [2], “Because of the deserving [stars]”[3]). Isabella distributed bronze versions of the medal to those she favored and retained one medal created in gold and embellished with diamonds and enamel. Leonardo da Vinci also drew an idealized version of Isabella d’Este’s likeness (top of page). While never completed as a painting, Leonardo’s drawing of Isabella (c. 1499–1500) provides a detailed depiction of the marchioness with a profile view of her face and frontal view of her shoulders. Leonardo disguised Isabella’s substantial figure in her billowing sleeves. The attention to her garment reveals Isabella’s interest in fashion, which was a frequent subject of her letters. A drawing after Leonardo’s original reveals that both of Isabella’s hands may have been visible and that one hand gestured toward a book, an attribute of erudition, before Leonardo’s original drawing was cropped along the bottom edge. Soon after Isabella’s marriage to Francesco II Gonzaga, the marchioness developed a space for a painting gallery – her studiolo – and a room to display her growing collections – the grotta. Isabella’s original studiolo and grotta were constructed within the Castello di San Giorgio, the medieval castle that forms part of the Ducal Palace in Mantua. Later, these rooms were moved to the Corte Vecchia of the Ducal Palace. The ground-floor location of these later rooms allowed for the addition of a secret garden and easier access for Isabella, who struggled with mobility as she aged. Isabella sought paintings with mythological themes from significant renaissance artists for her studiolo. The program, which scholars continue to debate, was developed in consultation with the humanist scholar Paride da Ceresara. While seven paintings have been interpreted as allegories of virtue conquering vice, another interpretation emphasizes the paintings’ roles within the space of the studiolo and within the context of humanist literature at the Mantuan court.[4] The painter Andrea Mantegna delivered the first two paintings Mars and Venus (or Parnassus) in 1497 and Pallas expelling the Vices in 1502. After much correspondence with Isabella, in 1505, the painter Pietro Perugino delivered the third painting for the studiolo The Combat of Love and Chastity (or Battle between Lasciviousness and Chastity) featuring Pallas and Diana fighting Venus and Cupid. Perugino’s painting did not please Isabella; she wrote that it appeared deficient in comparison to Mantegna’s canvases. Pietro Perugino, The Combat of Love and Chastity (or Battle between Lasciviousness and Chastity), 1505, oil on canvas, 160 x 191 cm (Musée du Louvre, Paris) In her later rooms in the Corte Vecchia, Isabella’s studiolo was connected to her grotta through a carved marble doorway attributed to Gian Cristoforo Romano. The grotta also featured Isabella’s personal symbols or imprese (emblems) ornamenting the ceiling. Gian Cristoforo Romano’s gold medal and Antico’s Hercules and Antaeus (mentioned above) were also on display in the grotta. The inventory conducted after Isabella’s death revealed the extensive collections acquired over her lifetime.

Beyond the Ducal Palace

While the Ducal Palace provided spaces to display her collections, Isabella looked forward to leaving its dark, damp environment. Her suburban villa, the Palazzo di Porto, provided an opportunity for escape with its gardens, fruit trees, and loggia. This environment was ideal for displaying and possibly using Isabella’s maiolica service, as earthenware dishes were preferred to silver in country villas. Decorated with mythological and Old Testament narratives, as well as her coat-of-arms and emblems, the twenty-three surviving dishes of the maiolica service used classical imagery to emphasize Isabella’s personal virtue in a manner that echoed her collections in the Ducal Palace. While often identified as the most significant female collector of the renaissance, Isabella d’Este is notable among all early modern patrons, both male and female, due to the variety of her collections, which span a broad range of materials, iconographic sources, and historical periods. Although Isabella’s paintings and art objects have long been dispersed from their original locations, the marchioness’s rooms in the Corte Vecchia remain in Mantua, Italy and allow us to imagine the original splendor of this collection.

Clifford Brown, Isabella d’Este in the Ducal Palace in Mantua: An overview of her rooms in the Castello di San Giorgio and the Corte Vecchia (Rome: Bulzoni, 2005).

Barbara Furlotti and Guido Rebecchini, The Art of Mantua: Power and Patronage in the Renaissance, translated by A. Lawrence Jenkins (Los Angeles: J. Paul Getty Museum, 2008).