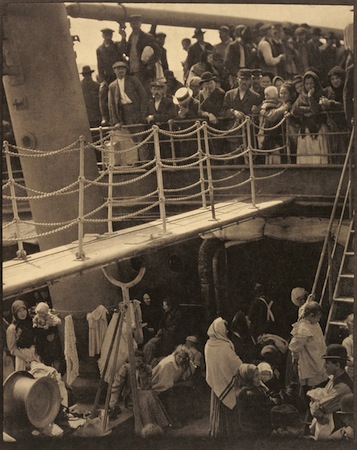 After his 8-year-old daughter Kitty finished the school year and he closed his Fifth Avenue art gallery for the summer, Alfred Stieglitz gathered her, his wife Emmeline, and Kitty’s governess for their second excursion to Europe as a family. The Stieglitzes departed for Paris on May 14, 1907, aboard the first-class quarters of the fashionable ship Kaiser Wilhelm II.

Although Emmeline looked forward to shopping in Paris and to visiting her relatives in Germany, Stieglitz was anything but enthusiastic about the trip. His marriage to status-conscious Emmeline had become particularly stressful amid rumors about his possible affair with the tarot-card illustrator/artist Pamela Coleman Smith. In addition, Stieglitz felt out of place in the company of his fellow upper-class passengers. But it was precisely this discomfort among his peers that prompted him to take a photograph that would become one of the most important in the history of photography. In his 1942 account “How The Steerage Happened,” Stieglitz recalls:

How I hated the atmosphere of the first class on that ship. One couldn’t escape the ‘nouveau riches.’ […]

On the third day out I finally couldn’t stand it any longer. I had to get away from that company. I went as far forward on the deck as I could […]

To the left was an inclining funnel and from the upper steerage deck there was fastened a gangway bridge which was glistening in its freshly painted state. It was rather long, white, and during the trip remained untouched by anyone.

On the upper deck, looking over the railing, there was a young man with a straw hat. The shape of the hat was round. He was watching the men and women and children on the lower steerage deck. Only men were on the upper deck. The whole scene fascinated me. I longed to escape from my surroundings and join these people.

In this essay, written 35 years after he took the photograph, Stieglitz describes how The Steerage encapsulated his career’s mission to elevate photography to the status of fine art by engaging the same dialogues around abstraction that preoccupied European avant-garde painters:

A round straw hat, the funnel leading out, the stairway leaning right, the white drawbridge with its railings made of circular chains – white suspenders crossing on the back of a man in the steerage below, round shapes of iron machinery, a mast cutting into the sky, making a triangular shape. I stood spellbound for a while, looking and looking. Could I photograph what I felt, looking and looking and still looking? I saw shapes related to each other. I saw a picture of shapes and underlying that the feeling I had about life. […] Spontaneously I raced to the main stairway of the steamer, chased down to my cabin, got my Graflex, raced back again all out of breath, wondering whether the man with the straw hat had moved or not. If he had, the picture I had seen would no longer be. The relationship of shapes as I wanted them would have been disturbed and the picture lost.
But there was the man with the straw hat. He hadn’t moved. The man with the crossed white suspenders showing his back, he too, talking to a man, hadn’t moved. And the woman with a child on her lap, sitting on the floor, hadn’t moved. Seemingly, no one had changed position.
[…It] would be a picture based on related shapes and on the deepest human feeling, a step in my own evolution, a spontaneous discovery.

With this account, Stieglitz argues with the benefit of more than three decades of hindsight that The Steerage suggests that photographs have more than just a “documentary” voice that speaks to the truth-to-appearance of subjects in a field of space within narrowly defined slice of time. Rather, The Steerage calls for a more complex, layered view of photography’s essence that can accommodate and convey abstraction. (Indeed, later photographers Minor White and Aaron Siskind would engage this project further in direct dialogue with the Abstract Expressionist painting.)

Stieglitz is often criticized for overlooking the subjects of his photograph in this essay, which has become the account by which the photograph is discussed in our histories. But in his account for The Steerage, Stieglitz also calls attention to one of the contradictions of photography: its ability to provide more than just an abstract interpretation, too. The Steerage is not only about the “significant form” of shapes, forms and textures, but it also conveys a message about its subjects, immigrants who were rejected at Ellis Island, or who were returning to their old country to see relatives and perhaps to encourage others to return to the United States with them.

As a reader of mass-marketed magazines, Stieglitz would have been familiar with the debates about immigration reform and the ghastly conditions to which passengers in steerage were subjected. Stieglitz’s father had come to America in 1849, during a historic migration of 1,120,000 Germans to the United States between 1845 and 1855. His father became a wool trader and was so successful that he retired by age 48. By all accounts, Stieglitz’s father exemplified the “American dream” that was just beyond the grasp of many of the subjects of The Steerage.

Moreover, investigative reporter Kellogg Durland traveled undercover as steerage in 1906 and wrote of it: “I can, and did, more than once, eat my plate of macaroni after I had picked out the worms, the water bugs, and on one occasion, a hairpin. But why should these things ever be found in the food served to passengers who are paying $36.00 for their passage?”

Still, Stieglitz was conflicted about the issue of immigration. While he was sympathetic to the plight of aspiring new arrivals, Stieglitz was opposed to admitting the uneducated and marginal to the United States of America—despite his claims of sentiment for the downtrodden. Perhaps this may explain his preference to avoid addressing the subject of The Steerage, and to see in this photograph not a political statement, but a place for arguing the value of photography as a fine art.

Start
Congratulations - you have completed Stieglitz, Steerage. You scored %%SCORE%% out of %%TOTAL%%. Your performance has been rated as %%RATING%%

Your answers are highlighted below.
The people seen in the lower half of the ship in Alfred Stieglitz’s The Steerage are:
For Alfred Stieglitz, The Steerage was important as:
In the beginning of the twentieth century, what was an argument for why photography could not be fine art?
According to the video, one of the ways Alfred Stieglitz’s The Steerage is seen as showing modern life is its:
Once you are finished, click the button below. Any items you have not completed will be marked incorrect. Get Results
There are 4 questions to complete.
Return
Shaded items are complete.
Return
You have completed
questions
question
Your score is
Correct
Wrong
Partial-Credit
You have not finished your quiz. If you leave this page, your progress will be lost.
Correct Answer
You Selected
Not Attempted
Final Score on Quiz
Attempted Questions Correct
Attempted Questions Wrong
Questions Not Attempted
Total Questions on Quiz
Question Details
Results
Date
Score
Hint
Time allowed
minutes
seconds
Time used
Answer Choice(s) Selected
Question Text
All done
Need more practice!
Keep trying!
Not bad!
Good work!
Perfect!

Although The Steerage has been interpreted as a statement about migration, Stieglitz himself talked about the photograph in terms of its artistic composition. Do you feel this is more of a historical document or a work of art? Are these separate categories? What makes the difference?

Stieglitz’s The Steerage has been misinterpreted as representing immigration, but it actually captures return migration on a journey back to Europe. Knowing the real subject, how can this photograph tell a more complete story of immigration and travel in America?