About geography and chronological periods in Native American art

“Native American” is a broad term encompassing many diverse groups. Located in a high desert, Chaco’s residents dedicated much of their energy to controlling water for crops.

Mesa Verde: carving a home from the cliffs

Remarkable structures in the American Southwest were home to cliff-dwelling farmers until around 1300. America before Columbus: a Mississippian view of the cosmos

Found marking the grave of an important individual, this gorget was worn as a neck ornament during life. Many interpretations have been proposed for this mound in modern-day Ohio—examine the clues and see what you think. Connections between the southwestern U.S. and Mesoamerica are revealed in these vessels featuring parrots or macaws and a merchant Not apparent to European eyes

Strange beasts and thickly-clothed humans disembarked from large wooden vessels floating on water with billowing white wings. They spoke a new language and brought objects never before seen: crossed poles which they planted in the ground, sometimes topped by colored fabrics, heavy sticks that shot fire and sounded a deafening boom.

Not knowing their intentions, some approached warily, some offered gifts, some attacked, others surely fled. American Indian responses to European arrival on their shores is as varied as were their sixteenth-century cultures. What we know about native reactions must be inferred from European written accounts and the material cultures of both peoples. 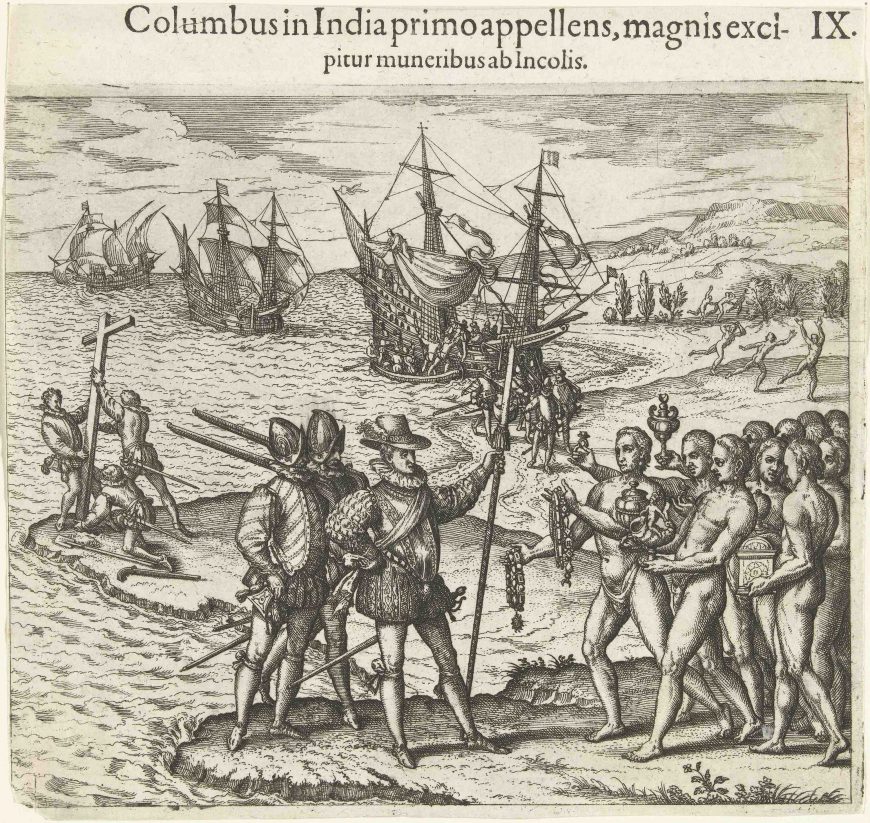 The image Theodore de Bry created in 1594, Christopher Columbus arrives in America, reflects one perception of first interactions—the one explorers most wanted people to believe about their adventures. Here we see nearly naked, muscular people (representing Tainos) offering gifts; in the background, others flail, seemingly in fear. But such accounts must be weighed against existing evidence. While Europeans liked to tell tales of natives treating them as gods, for the most part, initial encounters were measured assessments.

Throughout the Americas, native peoples were used to difference — there were more than 300 different languages in North America alone. For thousands of years, cultures in the Americas had flourished, adapted, and developed. While with hindsight we see the coming of Europeans as a major event, to many already on these shores, the newcomers were, perhaps, just another people.

Although the Paleo-Indians who migrated to America from Asia (across the Bering Strait — a land bridge that once joined present-day Alaska and eastern Siberia) during the Pleistocene Epoch (Ice Age) did not leave behind a written (or even a large material record) they can be identified by specific toolkits. Clovis points, for example, reveal technologies of hunting and processing meat, as well as crafting a sharp point from available resources. Workers used a hard rock to chip flakes from a softer one, shaping it into a sturdy point that could be used by hand or fastened to a wooden spear.

These tools reveal that Clovis people were hunter-gatherers, relying upon big game. As ice thawed, toolkits diversified. Later Archaic people left behind wooden fishing spears reflecting an expansion of hunting and diet, possible boat technology, and a variety of specialized stone tools. But the most significant development in the Americas was the start of agriculture which fundamentally altered lifestyles of people throughout the hemisphere.

The first American crop was developed in Mexico where people cultivated a wild grass known as teosinte—the small, wild grass ancestor of modern corn. Agriculture fundamentally changed the nature of culture on the continent. Once people began planting crops, cultures became more complex, more permanently settled (people had to stay in one place to care for crops), and, importantly for our understanding of them, left behind larger and more diverse cultural objects. Agriculture led to hierarchical structures of labor, politics, and religion, including the worship of gods associated with agricultural needs like water and sun.

At the Southwestern sites of Mesa Verde and Chaco Canyon, the alignment of structures reveals an understanding of solstices and astronomical concepts, while petroglyphs, wall paintings, and pottery reflect skilled artisans, symbolism, and design. The Pacific coast was the most densely populated region, we find carved sophisticated wood objects (including totem poles), and seashells used as currency. Along the Mississippi River, earthen ceremonial and effigy mounds speak to the presence of large urban centers and expansive trade networks in the region. In fact, at its peak, the Mississippian city of Cahokia was larger than London at the time. As the Europeans readied to cross the Atlantic, a number of metropolitan cultures in North America were declining, likely due to soil depletion or drought. People disbanded and spread out into smaller villages and tribes. When Europeans contacted the people of the East Coast, they depicted them naked, or nearly so, and labeled them as “savage” and “uncivilized.”

While many of these people had complex cosmologies, rituals, and agriculture, these were not apparent to European eyes. Crops, for instance, were planted together—corn, beans, and squash would intermingle—while Europeans practiced monoculture (one crop in one area).

Food played a major role in the Columbian Exchange (the exchange of plants, animals, culture, human populations, technology, diseases, and ideas between the Americas, West Africa, and Europe in the 15th and 16th centuries). Sixteenth-century ships brought with them new plants and animals—some intentional like pigs and horses—others unintentional like rats and cockroaches. These new species wreaked havoc on the landscape, tearing up indigenous crops and grazing in tribal hunting grounds. Americans, in turn, had crops that suited European tastes and so foods and other plants were brought back to Europe, including potatoes, tomatoes, beans, cocoa, and tobacco.

Likewise, disease was an unwitting environmental actor. The continent’s inhabitants had little to no immunity to a variety of deadly European pathogens such as smallpox and influenza. While Indians shared some diseases with Europeans, they were much less devastating.

By the end of the sixteenth century, Spain had established its strict and culturally-destructive mission system from California to Florida. While Spain dominated early colonial settlement, when the English defeated the Spanish Armada in 1588, the continent was opened up for Dutch, French, and English ventures.