Oldenburg stands next to his sculpture (left); students rally while one woman posts a sign which pictures the female symbol with a fist in the center and reads: Liberté / Egalité / Sororité (right) (source: Women at Yale)

A monumental tube of lipstick sprouting from a military vehicle appeared, uninvited, on the campus of Yale University amidst the 1969 student protests against the Vietnam War. While the sculpture may have seemed like a playful, if elaborate artistic joke, Claes Oldenburg’s Lipstick (Ascending) on Caterpillar Tracks was also deeply critical. Oldenburg made the 24-foot-high sculpture in collaboration with architecture students at his alma mater and then surreptitiously delivered it to Yale’s Beinecke Plaza. In Beinecke Plaza, the sculpture overlooked both the office of Yale’s president and a prominent World War I memorial. Lipstick (Ascending) on Caterpillar Tracks claimed a visible space for the anti-war movement while also poking fun at the solemnity of the plaza. The sculpture served as a stage and backdrop for several subsequent student protests. 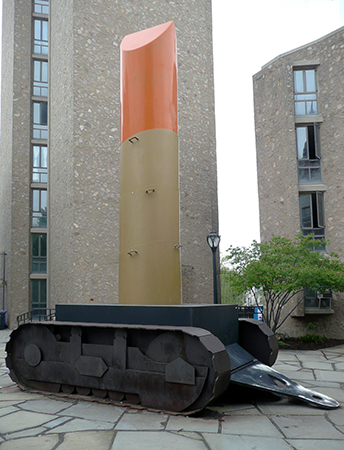 Oldenburg and the architecture students never intended for the original Lipstick (Ascending) on Caterpillar Tracks sculpture to be permanent. They made the base of plywood, and the red vinyl tip of the lipstick could be comically inflated and deflated—although the balloon mechanism didn’t always work. The original remained in Beinecke Plaza for ten months before Oldenburg removed it in order to remake the form in metal. The resulting sculpture was placed in a less-prominent spot on Yale’s campus, where it remains to this day.

Oldenburg had experimented with lipstick forms earlier in the 1960s, pasting catalog images of lipstick onto postcards of London’s Picadilly Circus. The resulting collages showed lipstick tubes looming like massive pillars over Picadilly’s plaza. In the Yale sculpture, the artist combined the highly “feminine” product with the “masculine” machinery of war. In doing so, he playfully critiqued both the hawkish, hyper-masculine rhetoric of the military and the blatant consumerism of the United States.

In addition to its feminine associations, the large lipstick tube is phallic and bullet-like, making the benign beauty product seem masculine or even violent. The juxtaposition implied that the U.S. obsession with beauty and consumption both fueled and distracted from the ongoing violence in Vietnam. 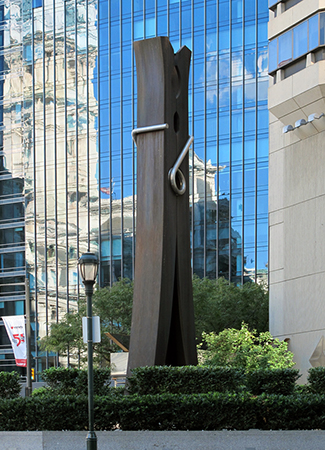 Oldenburg had been designing large-scale, vinyl versions of household objects since his Green Gallery exhibition in 1962. He had created collages and drawings that played with the notion of massive domestic objects in public places, but Lipstick was his first large-scale public artwork. Oldenburg went on to make several other public sculptures that enlarged everyday domestic items to monumental dimensions. For example, he rendered a clothespin on the scale of an ancient Egyptian obelisk in a 1976 sculpture for Philadelphia, Pennsylvania (below).

By bringing both domestic and military objects into a public space, Lipstick (Ascending) on Caterpillar Tracks blurred the lines between public and private, and between the war in Vietnam and culture of the United States. In doing so, it upheld Oldenburg’s 1961 declaration that “I am for an art that is political-erotical-mystical, that does something other than sit on its ass in a museum […] I am for an art that imitates the human, that is comic, if necessary, or violent, or whatever is necessary […].”1

This sculpture at Yale University