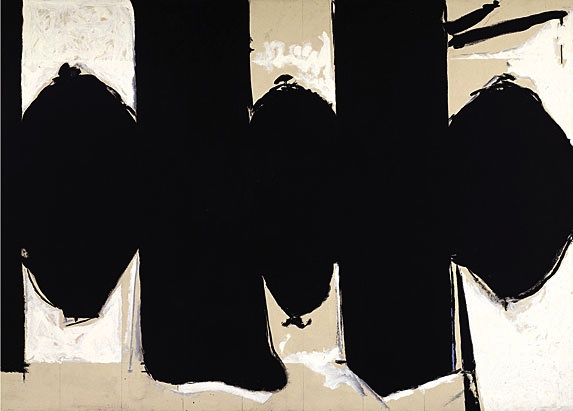 Robert Motherwell, Elegy to the Spanish Republic, No. 110, 1971, acrylic with pencil and charcoal on canvas, 82 x 114 in. (Solomon R. Guggenheim Museum, New York)Excerpt from of an interview with Robert Motherwell conducted by Paul Cummings at the Artist’s home in Greenwich, Connecticut November 24, 1971,  Oral History Interview, Archives of American Art, Smithsonian Institution

PAUL CUMMINGS: In the late 1940s you began the Elegy to the Spanish Republic series. Was that title an afterthought on looking back at things?

PAUL CUMMINGS: How did you develop that? What is it based on?

ROBERT MOTHERWELL: Sometime in the 1940s – I forget when – say, about 1947, when I was still editing books with Wittenborn and Schultz they told me that they’d like to put out an annual about the current scene and would I edit it. I said sure; but I think it should be broader than just painting and sculpture, and that it was too great a responsibility and too great a demand on my time to do it single-handed. I said that I would be glad to do it if I could have some co-editors. The said, “Fine. Who do you want?” I suggested Pierre Chareau as the architectural editor; he was a French architect-in-exile with whom I had worked several years building a studio in East Hampton. I suggested John Cage to deal with music and dance. And Harold Rosenberg to deal with literature; and I would do the painting part. They found that agreeable. We brought out an issue. It was called “Possibilities.” The we were working on the second issue. in those days Harold Rosenberg regarded himself as really a poet. He was doing these other things incidentally the way I’ve always regarded myself as really a painter and doing these other things incidentally. He wrote a very powerful, brutal, I would think Rimbaud-inspired poem. We agreed that I would handwrite the poem in my calligraphy and make a drawing or drawings to go with it and it was to be in black and white. So I began to think not only about getting the brutality and aggression of his poem in some kind of abstract terms but also that this was going to be reproduced in black and white. I worked for weeks getting the amounts. In painting really the whole issue of quality is quantities, is the amounts of black and white or thinness or thickness, fluidity,and whatever. I really conceived something that worked beautifully in black nd white. It must have been at that time that Schultz was killed in the airplane and the whole project was dropped. I stuck the thing in a drawer in East Hampton. A year or two later I moved to New York to a little studio on Fourteenth Street. One day while unpacking I came across it and was able to look at it with detachment. I thought: God, that’s a beautiful idea; I should make some paintings on the basis of that kind of structure.

PAUL CUMMINGS: This was on your black and white structure?

ROBERT MOTHERWELL: Yes. One day I realized there was something really obsessional about it, that I would probably make many; that it had taken on a life of its own; and that it would no longer be legitimate to refer it merely to Harold’s poem which indeed was the original impulse that it might indeed turn out to be possibly the main statement I would make in painting and therefore I would like to connect this with something that through associations reverberated in my mind as completely and as widely as the concept itself. And belonging to the Spanish Civil War generation I thought of that. I think maybe there was a transitional moment where I thought if it’s going to refer to poetry it should be to Lorca [Frederico García Lorca]. In fact, the first Elegy was originally called At Five in the Afternoon from the refrain out to Lorca’s poem, the Death of the Bullfighter [Lament for the Death of a Bullfighter (1935)]. Then one of the few times in my life that a lot of people talked to me about a picture was about that picture, and they would say, “I saw the most beautiful picture by you. I can’t remember exactly the title. It has something to do with the cocktail hour or something.” And suddenly I realized that five in the afternoon in New York means not the death of a bullfighter but a martini. And then I began to grope for a more generalized expression. The original ones were subtitles, I mean Elegy to the Spanish Republic (Granada) or whatever. And then that began to raise questions: does it really look like Granada, and so on.

Motherwell’s Elegy to the Spanish Republic, No. 110 at the Guggenheim Museum