Frederic Church, The Natural Bridge, Virginia, 1852, oil on canvas, 28 x 23 inches (The Fralin Museum of Art at the University of Virginia)

Start
Congratulations - you have completed Church, Natural Bridge. You scored %%SCORE%% out of %%TOTAL%%. Your performance has been rated as %%RATING%%

Your answers are highlighted below.
What is the Natural Bridge?
Why do scholars believe Frederic Edwin Church represented the Natural Bridge in a vertical composition?
Which of these is not among the ways Frederic Edwin Church symbolically demonstrated his faith in the strength of the American republic?
What was the charge issued by Ralph Waldo Emerson to Americans in his 1836 essay, Nature?
Once you are finished, click the button below. Any items you have not completed will be marked incorrect. Get Results
There are 4 questions to complete.
Return
Shaded items are complete.
Return
You have completed
questions
question
Your score is
Correct
Wrong
Partial-Credit
You have not finished your quiz. If you leave this page, your progress will be lost.
Correct Answer
You Selected
Not Attempted
Final Score on Quiz
Attempted Questions Correct
Attempted Questions Wrong
Questions Not Attempted
Total Questions on Quiz
Question Details
Results
Date
Score
Hint
Time allowed
minutes
seconds
Time used
Answer Choice(s) Selected
Question Text
All done
Need more practice!
Keep trying!
Not bad!
Good work!
Perfect!

Read more about the 2021 exhibition, Virginia Acadia: The Natural Bridge in American Art, held at the Virginia Museum of Fine Arts.

Learn more about this painting in the context of the 2020–21 exhibition, Alexander von Humboldt and the United States; Art, Nature, and Culture, held at the Smithsonian American Art Museum.

More to Think About

Church’s painting is meticulous in the rendering of natural details, from rocks to plants to the bubbling stream. Do you think this level of realism is essential to communicating his message of support for American republicanism? Why or why not?

Knowing that Church’s intention with this painting was to convey his belief in the future of the American republic, how might you imagine the conversation between the two figures in the scene?

What other natural formations do you think are symbolic of the United States in some way? Have you visited any of these sites in person? Compare them with the symbolism of Natural Bridge. 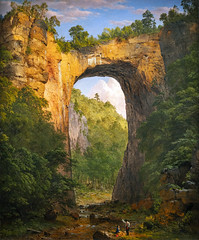