Start
Congratulations - you have completed Homer, Army Teamsters. You scored %%SCORE%% out of %%TOTAL%%. Your performance has been rated as %%RATING%%

Your answers are highlighted below.
Which of these clues in the painting do not identify the figures as part of the U.S. (Union) army?
How does this image compare with negative, stereotypical images of Black people at the time?
Which of these does not reflect the ways that Black men and women participated in the U.S. Army during the Civil War?
Which is the most likely interpretation of the alternate title for this painting, “The Bright Side”?
Once you are finished, click the button below. Any items you have not completed will be marked incorrect. Get Results
There are 4 questions to complete.
Return
Shaded items are complete.
Return
You have completed
questions
question
Your score is
Correct
Wrong
Partial-Credit
You have not finished your quiz. If you leave this page, your progress will be lost.
Correct Answer
You Selected
Not Attempted
Final Score on Quiz
Attempted Questions Correct
Attempted Questions Wrong
Questions Not Attempted
Total Questions on Quiz
Question Details
Results
Date
Score
Hint
Time allowed
minutes
seconds
Time used
Answer Choice(s) Selected
Question Text
All done
Need more practice!
Keep trying!
Not bad!
Good work!
Perfect!

Educator Resources on Black Soldiers Serving with the U.S. Military during the Civil War, from the National Archives

Homer’s image of a Sharpshooter on Picket Duty, a video by Smarthistory

Why do you think Homer continued to make images of the war after it was over?

Images of wartime, even if not of battle scenes, can elicit strong emotional responses. In this regard, can you compare the responses to Homer’s painting mentioned in the video with the impact of images of more contemporary conflicts, in our own time? What is similar and different? 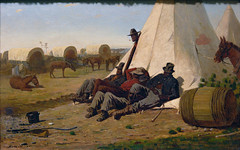