Browse this content
Independence from Spanish rule in South America
Early Scientific Exploration in Latin America
Latin American artistic pilgrimages to Paris
The challenge of the nude in 19th-century Latin American painting
Costumbrismo
Carmelo Fernández, The Strait of Furatena in the Minero River 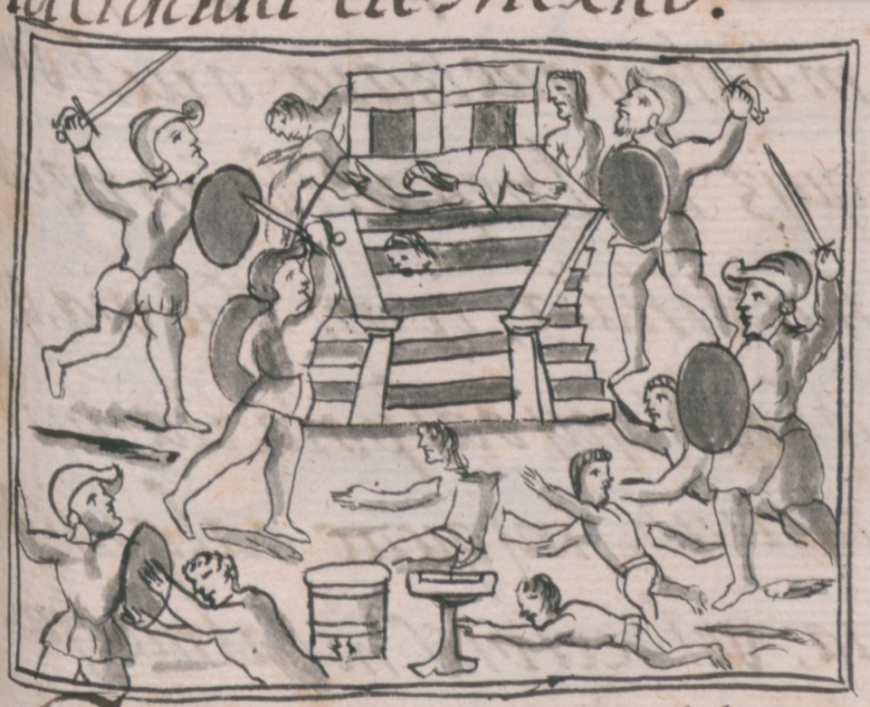 This May marks 500 years since the Toxcatl massacre, in which Indigenous people were killed during a festival that took place in the Aztec capital of Tenochtitlan (today’s Mexico City). Two competing histories of this event exist. In the Spanish telling, the conquistadors acted in self-defense, yet a very different narrative emerges in the Indigenous version.

On May 22, 1520, Spanish conquistadors and their Indigenous allies attacked the Mexicas—the Nahuatl-speaking ethnic group that dominated a vast multi-ethnic territory that spanned from the Pacific Ocean to the Gulf coast, and from central Mexico to present-day Guatemala. The attack during the Toxcatl festival incited a war that led to the end of Mexica supremacy and to the beginning of the conquest of Mexico. Spaniards order Mexicas to prepare the Toxcatl festival and female ritual practitioners preparing amaranth dough that will be made into an incarnation of the deity Huitzilopochtli for the Toxcatl festival while Spanish soldiers observe their work, Book 12 of the Florentine Codex (“Of the Conquest of New Spain”). Ms. Mediceo Palatino 220, 1577, fols. 29v and 30 (Biblioteca Medicea Laurenziana, Florence) 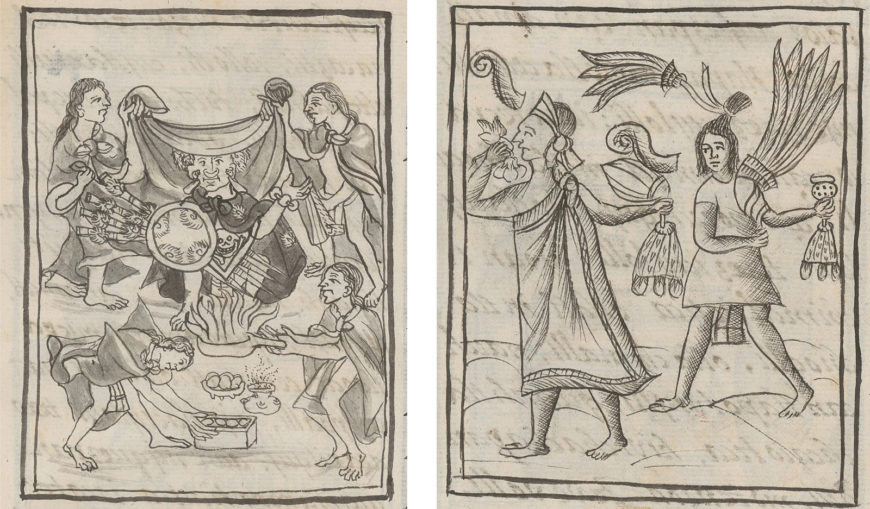 Unveiling of the amaranth-dough incarnation of Huitzilopochtli (the patron deity of the Mexica associated with warfare, fire, and the Sun) and richly dressed leaders dancing and singing during the Toxcatl festival, Book 12 of the Florentine Codex (“Of the Conquest of New Spain”). Ms. Mediceo Palatino 220, 1577, fol. 31v (details) (Biblioteca Medicea Laurenziana, Florence)

For most of the past 500 years, this history of the conquest of Mexico has been based on the accounts of Spaniards. Francisco López de Gómara’s La conquista de Mexico was one of the most influential historical accounts of the conquest of Mexico, drawing on Hernán Cortés’s letters addressed to the Spanish king that justified the attack. The Spaniards claimed the festival was a cover-up for an Indigenous rebellion. However, Nahuatl-language texts survive that tell us an alternative version. They excruciatingly detail the human horror and the treachery of a mass murder, now known as the Toxcatl Massacre. One of the most critical Indigenous sources is Book 12 of the Florentine Codex, the manuscript that is the focus of a digital research initiative at the Getty Research Institute.

Book 12 of the 16th-century Nahuatl-Spanish encyclopedia, known as the Florentine Codex, preserves the point of view of the Mexicas. It is the longest and most detailed historical account of the conquest written in Nahuatl, the lingua franca of pre-Hispanic central Mexico. Here the Toxcatl Massacre is described as an attack carried out with cruelty, stealth, and treachery. The Nahua authors write that the Spaniards ordered the ceremony to take place, even after they detained the Mexica ruler, Moteuczoma Xocoyotzin, and looted the palace for gold.

Book 12 of the Florentine Codex begins with an illustration of the Toxcatl Massacre. The Nahua authors and artists deliberately placed this image at the beginning of the book to foreground their underlying argument: the treacherous attack and ensuing war on Tenochtitlan, the Mexica capital, and the sister city Tlatelolco were unjustified. 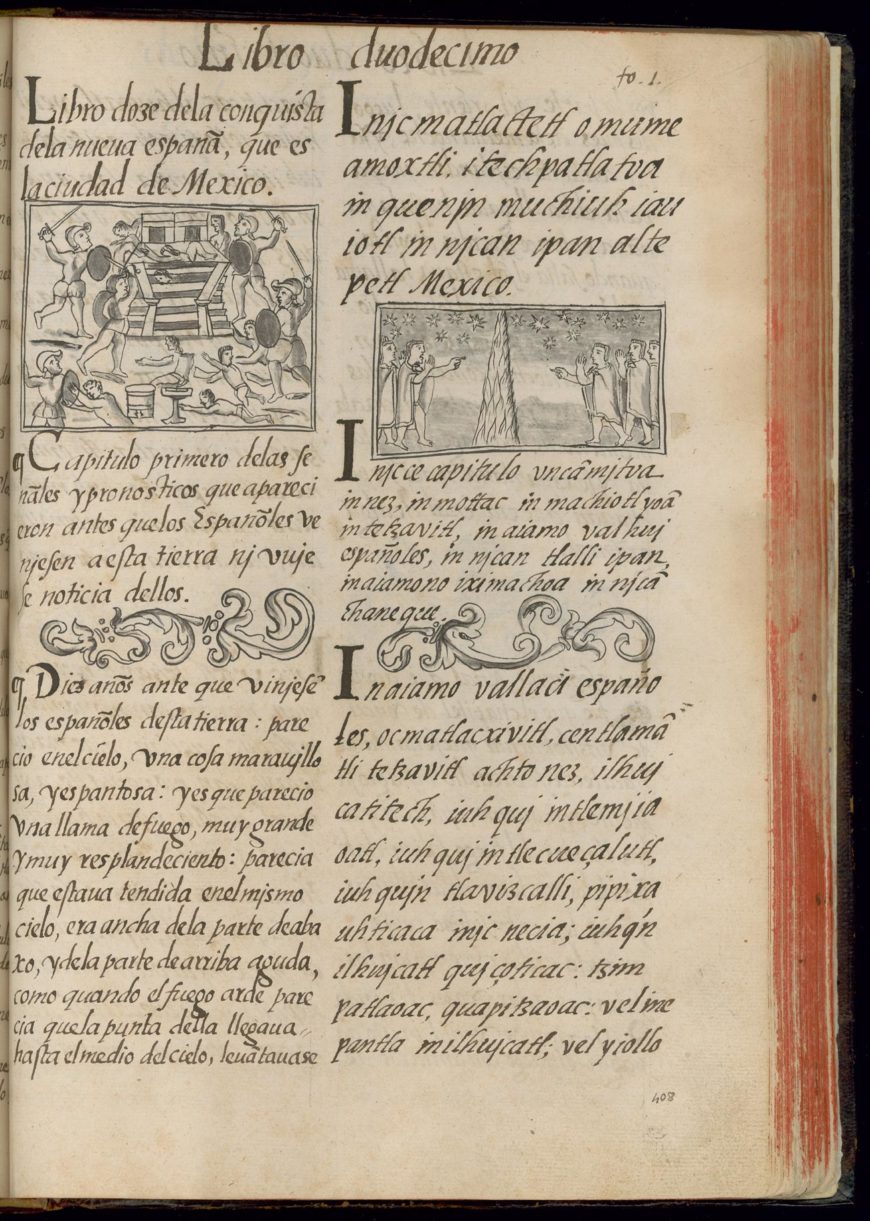 First page of Book 12 of the Florentine Codex (“Of the Conquest of New Spain”) showing the Toxcatl Massacre and a second illustration of the omens foretelling the arrival of Spaniards. Ms. Mediceo Palatino 220, 1577, fol. 1 (Biblioteca Medicea Laurenziana, Florence)

The image depicts the gruesome attack: armed Spaniards crowd in from all sides and hack away at unarmed Mexicas gathered for the ceremony. In the background is the Templo Mayor, Tenochtitlan’s main ceremonial temple, signaling the sacred environment in which this massacre was perpetrated. Two traditional drums in the foreground, the vertical huehuetl and the horizontal teponaztli, underscore the violent interruption of the religious festival. The Nahuatl text in Book 12 and in other 16th-century Nahuatl sources, such as the Codex Aubin, detail how the Spaniards initiated the attack by cutting off the hands of the drummer and then dismembering him—a traumatizing memory also captured in multiple images in the manuscript. These painful visual elements are echoed in this colorful image painted in a history of New Spain compiled by the Dominican friar Diego Durán in 1579. Again, we see two drums at the center, Spaniards entering the sacred courtyard from all four sides, and dismembered and bleeding Mexica bodies. This image was most likely painted by an Indigenous artist. We see a European-style colonnade, but the architecture and people are flattened against the pictorial plane to allow for maximum visibility following Indigenous artistic norms.

The Nahuatl text of Book 12 recounts the bloody scene:

Then they stabbed every­ one with iron lances and struck them with iron swords. They stuck some in the belly, and then their entrails came spilling out. They split open the heads of some, they really cut their skulls to pieces, their skulls were absolutely pulverized. And some they hit on the shoulders; their bodies broke open and ripped. Some they hacked on the calves, some on the thighs, some on their bellies, and then all their entrails would spill out. And there were some who were still running in vain: they were dragging their intestines and seemed to get their feet caught in them. Eager to get to safety, they found nowhere to go.Book 12 of the Florentine Codex The chapter on the Toxcatl Massacre ends with the Mexica fending off the attackers, in an atmosphere described as “yellowish” (cozpol). The color yellow refers to the blur of arrows, harpoons, and darts, all made from reeds, falling upon the attackers. The Mexicas win this battle but will lose the war that follows. The story ends with the surrender of the Mexicas, led by Cuauhtemoc, the last ruler of Tenochtitlan.

Essay first published in the iris (CC BY 4.0)

Cite this page as: Bérénice Gaillemin, "Remembering the Toxcatl Massacre: The Beginning of the End of Aztec Supremacy," in Smarthistory, August 11, 2020, accessed October 19, 2021, https://smarthistory.org/toxcatl-massacre/.