Unearthing the Aztec past, the destruction of the Templo Mayor (Mexico City) . Speakers: Dr. Lauren Kilroy-Ewbank and Dr. Steven Zucker 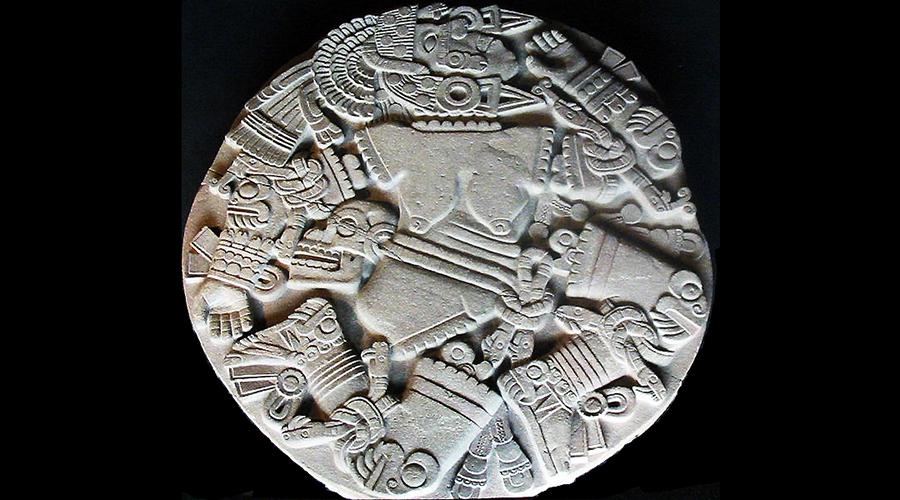 In 1978, electrical workers in Mexico City came across a remarkable discovery. While digging near the main plaza, they found a finely carved stone monolith that displayed a dismembered and decapitated woman. Immediately, they knew they found something special. Shortly thereafter, archaeologists realized that the monolith displayed the Mexica (Aztec)¹ goddess Coyolxauhqui, or Bells-Her-Cheeks, the sister of the Mexica’s patron god, Huitzilopochtli (Hummingbird-Left), who killed his sister when she attempted to kill their mother. This monolith led to the discovery of the Templo Mayor, the main Mexica temple located in the sacred precinct of the former Mexica capital, known as Tenochtitlan (now Mexico City). 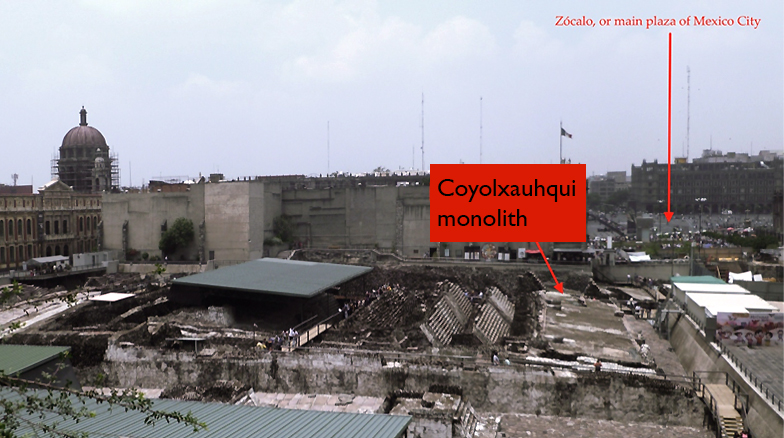 View of the Templo Mayor excavations today in the center of what is now Mexico City (photo: Lauren Kilroy-Ewbank) 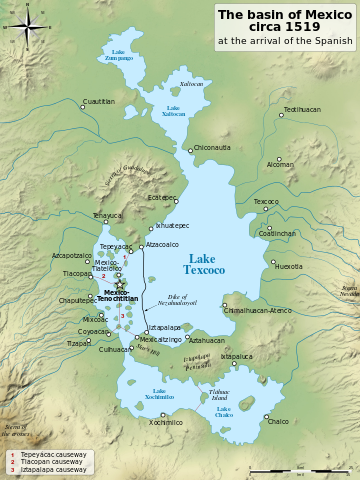 The city of Tenochtitlan was established in 1325 on an island in the middle of Lake Texcoco (much of which has since been filled in to accommodate Mexico City which now exists on this site), and with the city’s foundation the original structure of the Templo Mayor was built. Between 1325 and 1519, the Templo Mayor was expanded, enlarged, and reconstructed during seven main building phases, which likely corresponded with different rulers, or tlatoani (“speaker”), taking office. Sometimes new construction was the result of environmental problems, such as flooding. 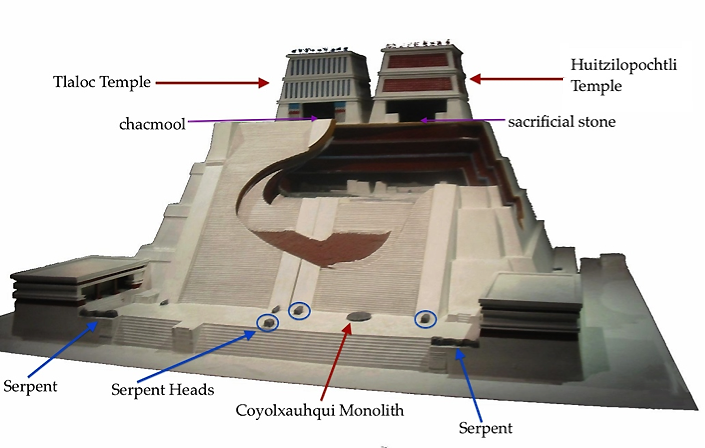 Located in the sacred precinct at the heart of the city, the Templo Mayor was positioned at the center of the Mexica capital and thus the entire empire. The capital was also divided into four main quadrants, with the Templo Mayor at the center. This design reflects the Mexica cosmos, which was believed to be composed of four parts structured around the navel of the universe, or the axis mundi.

The Templo Mayor was approximately ninety feet high and covered in stucco. Two grand staircases accessed twin temples, which were dedicated to the deities Tlaloc and Huitzilopochti. Tlaloc was the deity of water and rain and was associated with agricultural fertility. Huitzilopochtli was the patron deity of the Mexica, and he was associated with warfare, fire, and the Sun. 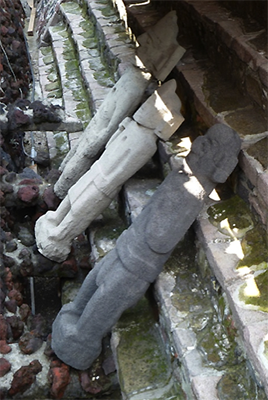 Paired together on the Templo Mayor, the two deities symbolized the Mexica concept of atl-tlachinolli, or burnt water, which connoted warfare—the primary way in which the Mexica acquired their power and wealth.

But by far the most famous object decorating the Huiztilopochtli temple is the Coyolxauhqui monolith, found at the base of the stairs. Originally painted and carved in low relief, the Coyolxauhqui monolith is approximately eleven feet in diameter and displays the female deity Coyolxauhqui, or Bells-on-her-face. Golden bells decorate her cheeks, feathers and balls of down adorn her hair, and she wears elaborate earrings, fanciful sandals and bracelets, and a serpent belt with a skull attached at the back. Monster faces are found at her joints, connecting her to other female deities—some of whom are associated with trouble and chaos. Otherwise, Coyolxauhqui is shown naked, with sagging breasts and a stretched belly to indicate that she was a mother. For the Mexica, nakedness was considered a form of humiliation and also defeat. She is also decapitated and dismembered. Her head and limbs are separated from her torso and are organized in a pinwheel shape. Pieces of bone stick out from her limbs. 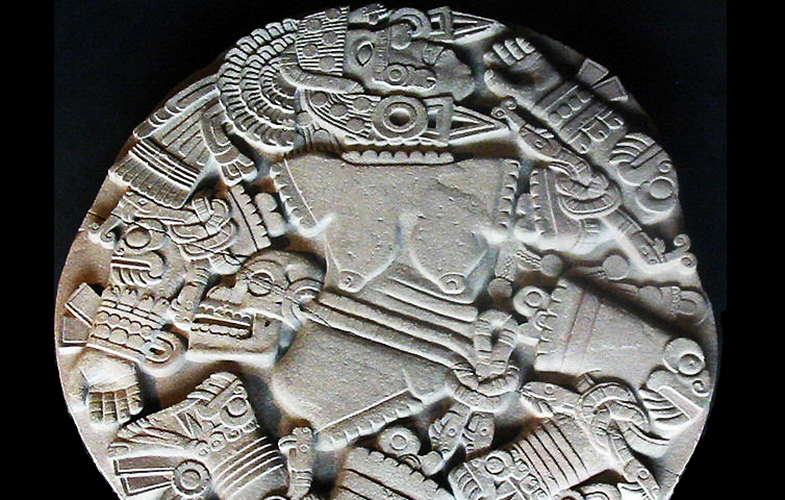 The monolith relates to an important myth: the birth of the Mexica patron deity, Huitzilopochtli. Apparently, Huitzilopochtli’s mother, Coatlicue (Snakes-her-skirt), became pregnant one day from a piece of down that entered her skirt. Her daughter, Coyolxauhqui, became angry when she heard that her mother was pregnant, and together with her 400 brothers (called the Centzonhuitznahua) attacked their mother. At the moment of attack, Huitzilopochtli emerged, fully clothed and armed, to defend his mother on the mountain called Coatepec (Snake Mountain). Eventually, Huitzilopochtli defeated his sister, then beheaded her and threw her body down the mountain, at which point her body broke apart. 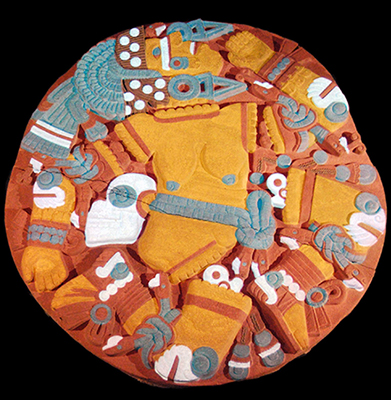 The monolith portrays the moment in the myth after Huitzilopochtli vanquished Coyolxauhqui and threw her body down the mountain. By placing this sculpture at the base of Huiztilopochtli’s temple, the Mexica effectively transformed the temple into Coatepec. Many of the temple’s decorations and sculptural program also support this identification. The snake balustrades and serpent heads identify the temple as a snake mountain, or Coatepec. It is possible that the standard-bearer figures recovered at the Templo Mayor symbolized Huitzilopochtli’s 400 brothers.

Ritual performances that occurred at the Templo Mayor also support the idea that the temple symbolically represented Coatepec. For instance, the ritual of Panquetzaliztli (banner raising) celebrated Huitzilopochtli’s triumph over Coyolxauhqui and his 400 brothers. People offered gifts to the deity, danced and ate tamales. During the ritual, war captives who had been painted blue were killed on the sacrificial stone and then their bodies were rolled down the staircase to fall atop the Coyolxauhqui monolith to reenact the myth associated with Coatepec. For the enemies of the Mexica and those people the Mexica ruled over, this ritual was a powerful reminder to submit to Mexica authority. Clearly, the decorations and rituals associated with the Templo Mayor connoted the power of the Mexica empire and their patron deity, Huitzilopochtli.

At the top center of the Tlaloc temple is a sculpture of a male figure on his back painted in blue and red. The figure holds a vessel on his abdomen likely to receive offerings. This type of sculpture is called a chacmool, and is older than the Mexica. It was associated with the rain god, in this case Tlaloc. 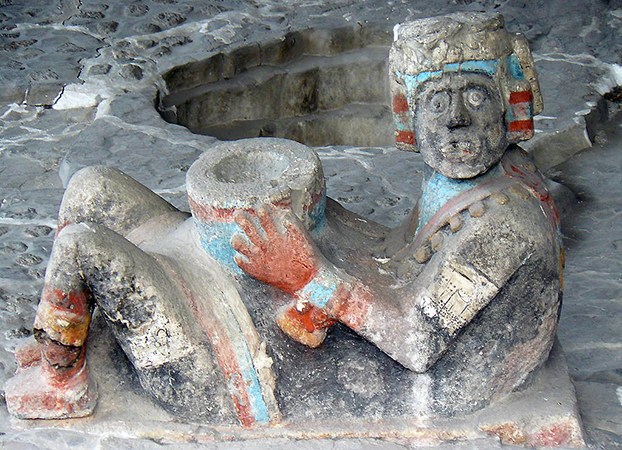 At the base of the Tlaloc side of the temple, on the same axis as the chacmool, are stone sculptures of two frogs with their heads arched upwards. This is known as the Altar of the Frogs. The croaking of frogs was thought to herald the coming of the rainy season, and so they are connected to Tlaloc. 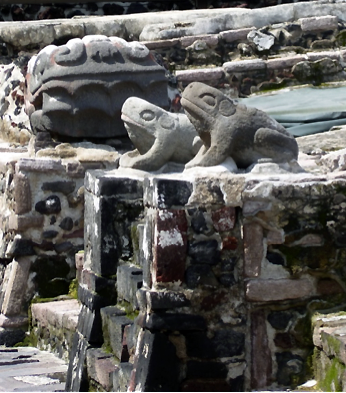 Offerings at the Templo Mayor

Over a hundred ritual caches or deposits containing thousands of objects have been found associated with the Templo Mayor. Some offerings contained items related to water, like coral, shells, crocodile skeletons, and vessels depicting Tlaloc. Other deposits related to warfare and sacrifice, containing items like human skull masks with obsidian blade tongues and noses and sacrificial knives. Many of these offerings contain objects from faraway places—likely places from which the Mexica collected tribute. Some offerings demonstrate the Mexica’s awareness of the historical and cultural traditions in Mesoamerica. For instance, they buried an Olmec mask made of jadeite, as well as others from Teotihuacan (a city northeast of modern-day Mexico City known for its huge monuments and dating roughly from the 1st century until the 7th century C.E.). The Olmec mask was made over a thousand years prior to the Mexica, and its burial in Templo Mayor suggests that the Mexica found it precious and perhaps historically significant. 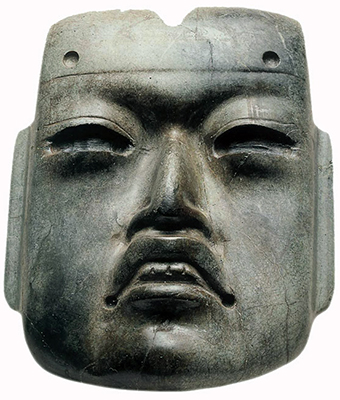 After the Spanish Conquest in 1521, the Templo Mayor was destroyed, and what did survive remained buried. The stones were reused to build structures like the Cathedral in the newly founded capital of the Viceroyalty of New Spain (1521-1821). If you visit the Templo Mayor today, you can walk through the excavated site on platforms. The Templo Mayor museum contains those objects found at the site, including the recent discovery of the largest Mexica monolith showing the deity Tlaltecuhtli.

1. The Aztec referred to themselves as Mexica

Virtual Tour of the Templo Mayor museum (in Spanish)

The Templo Mayor and its Symbolism (Guggenheim Museum)

Templo Mayor on the Heilbrunn Timeline of Art History, The Metropolitan Museum of Art

The Aztec World, ed. By Elizabeth Baquedano and Gary M. Feinman (New York: Abrams in association with the Field Museum, 2008). 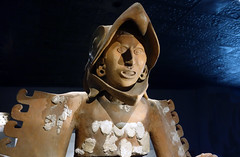 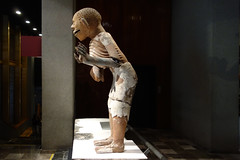 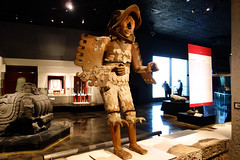 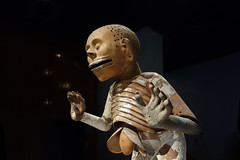 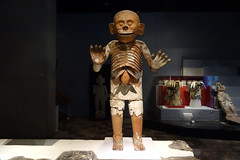 Cite this page as: Dr. Lauren Kilroy-Ewbank and Dr. Steven Zucker, "Unearthing the Aztec past, the destruction of the Templo Mayor," in Smarthistory, September 14, 2017, accessed February 8, 2023, https://smarthistory.org/unearthing-the-aztec-past-the-destruction-of-the-templo-mayor/.