“Old Master” portraits—those produced in Europe during the seventeenth, eighteenth, and nineteenth centuries—are often celebrated for their beauty, grandeur, and ability to convey not only the outward appearances of their subjects, but also their inner character. Few artists still produce works in the traditional styles used by these old masters. The contemporary painter Kehinde Wiley, though, relies on them as models for his striking portraits, usually of young, fashionable African American men. For his style and compositions, he often copies famous European portraits by Diego Velázquez, Jacques-Louis David, and others. Some of his models are famous celebrities, and others are average people, but all are elevated to new heights through Wiley’s dramatic images.

The choice of model greatly influenced Wiley’s painting. The image of Napoleon is meant to be imposing. We are supposed to literally look up to the French emperor—his throne is elevated and the painting was certainly hung so that Napoleon’s head was above that of the viewer. Wiley’s image borrows and even intensifies many of the elements of Ingres’ portrait. 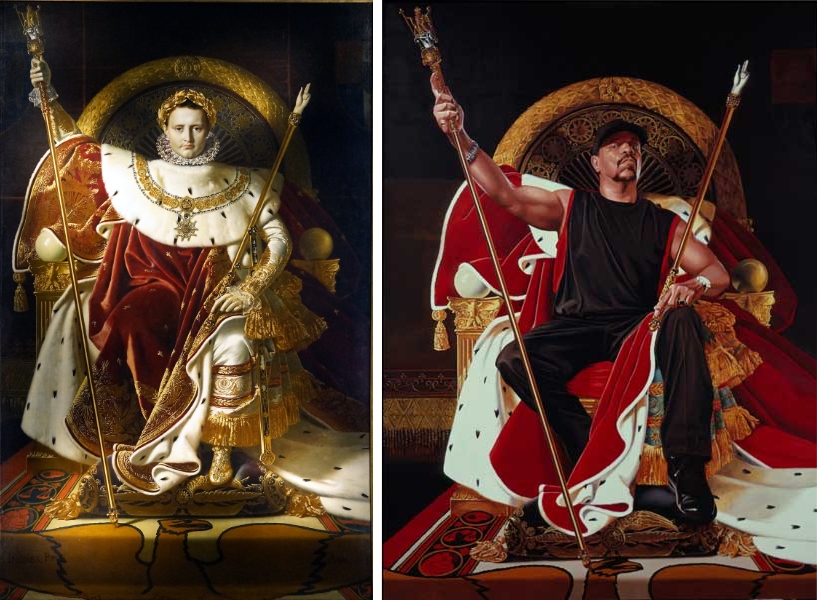 The painting of Ice T uses deep, rich colors, particularly the regal, royal red of the robes the figure sits upon and the gold of the throne, staff, scepter, and other details. These colors stand out against the dark background and the figure’s black clothing. The composition is largely symmetrical, with the throne centered vertically. The staff and scepter are posed at nearly identical angles, which frame the figure between them. In both images, the round back of the throne becomes a sort of halo, suggesting not merely earthly power but divinity. Still, both artists made their images just a bit less static by introducing slight asymmetries. Both figures raise one arm and lower the other (though the scepters they hold match the raised arms). Both have their robes slung out to their left. Wiley also tilts his model’s head back and to his left, and splays his legs at a casual angle that contrasts with the grand and formal tone of the painting.

There are other important differences between model and copy, in addition to the obvious substitution of one sitter for another and the small—but important—differences in pose. Wiley has also cropped his image slightly tighter, which brings his sitter a bit closer to us, while also compressing the space within the image. This makes for a more confrontational image. Napoleon is protected from our approach, and so sits bolt-upright. His head is perhaps tipped ever so slightly downward, emphasizing his position above us, raised up on a platform and then on his elevated throne. Ice T leans back a bit. His posture is certainly less formal, but it is not quite relaxed. His torso seems tilted away from us, as if to give himself a bit more personal space, and he raises his chin toward us in a gesture that might be wary. By painting Ice T in a sleeveless shirt, Wiley also emphasizes his biceps, and therefore his physical strength.

The light source in both paintings is in front of the figures and to their right, as indicated by highlights and shadows, but Wiley intensifies its sharpness, picking out bright highlights on Ice T’s arms, but veiling his eyes in the shadow of his ball cap. Lighting and pose seem to reveal Napoleon to us, but to partially conceal Ice T. The bright lighting also, though, serves to emphasize the gold and jewels of the throne, scepter, and staff. In Ingres’ work, they seem to merely be part of the general opulence of the image. In Wiley’s image, in contrast, they pop out of the canvas. Ice T’s wristwatch is yet brighter, flashing in the light and reflecting it back at us.

The use of the opulent red robes is another important point of contrast between the two images. The robes are Napoleon’s, not Ice T’s, and he wears them with authority. The semicircle of rich ermine fur draped over his chest completes the circle begun by the arched back of the throne, framing Napoleon’s face in dramatic fashion. Wiley has placed the robe as if in quite the same place, relative to the throne, but now it is behind the figure, like a backdrop. Behind Ice T’s right arm, the robes are raised as if the invisible ghost of Napoleon is still within it, holding his old pose. This creates a tension: Why doesn’t Ice T put on the robe? Is it because he is not really an emperor, not really a ruler and not worthy to wear it? Or is he too grand to wear such an affectation, instead merely sitting on it as if it were an old jacket?

Although they are presented in the guise of European aristocrats, kings, and emperors, many of Wiley’s models are often young men from Harlem. Most are not music or television stars, like Ice T. All of his models, though, are elevated, presented as grand, dignified and idealized in a manner befitting royalty. Some of his titles indicate their sources, such as After Titian’s “The Penitent Mary Magdalen” (2009) and others, such as Ice T, rely on the viewer’s background knowledge of the artistic canon (the works art historians have generally declared to be exemplary and timeless—a problematic concept that has often marginalized women, people of color, and others). In both cases, though, we are supposed to recognize the references being made, since our awareness of the sources draws attention not only to issues of class—even Ice T is no emperor, wealthy though he surely is—but also to gender and race. Wiley places male models in the roles of female figures, like Mary Magdalene or the Three Graces. More consistently, though, he replaces European figures with figures of African descent. The original subjects of the Old Master portraits, like Napoleon, were frequently imperialists and colonialists, conquering and oppressing the peoples of Africa, Asia, and the Americas. By replacing them with African-American figures, Wiley is making a comment—perhaps obscure or unfixed—on the relative statuses of communities. Is he arguing that, under other circumstances, his sitters might have been kings? That they ought to be kings? Or, particularly in the cases of his wealthy and famous subjects like Ice T, that they are today’s royalty? It is worth noting that Ingres’ portrait was, itself, somewhat derivative of earlier models. In order to create an image of Napoleon as the emperor of France, Ingres turned to portraits from the Middle Ages—the last time that France had “emperors.” In the Middle Ages, regions of France were part of the Holy Roman Empire, and rulers such as Charlemagne and his descendants claimed the title of emperor. Images of these rulers, like the portrait of Emperor Lothair (great-great-great-great grandson of Charlemagne) from the Lothair Gospels have much in common with Ingres’ painting (and therefore with Wiley’s). Like Ingres’ portrait of Napoleon (and therefore like Wiley’s portrait of Ice T), Lothair is centered and seated on an elevated throne with a curved back. All three wear elaborate robes and hold scepters of authority. The red of Napoleon’s robes is a reference to the “imperial purple” draped behind Lothair.

Still, in a sense, all three are pretenders to their thrones. Ice T is not a political ruler, Napoleon was briefly a powerful conqueror who first seized political power in a coup d’état, and Lothair was, in essence, king of a small band of territory running along what is now the boundary between France and Germany, and slightly into northern Italy. They are all presented—through the use of the purple/red color, the shape and style of their thrones, their bearing of scepters, and so on—as if they are ancient Roman emperors, rulers of one of the most powerful empires in the world’s history.

Wiley’s fidelity to Ingres’ Napoleon on his Imperial Throne is striking. Most of the composition is extremely similar, though the substitution of modern celebrity for an earlier ruler completely transforms the image. Ingres was working for Napoleon and there is nothing intentionally ironic or amusing about his portrait (nor about Lothair’s, for that matter). Napoleon was tremendously powerful, and took power by military force. The power he wielded was enforced through violence. Of course, hip-hop culture has its own history of violence and its glorification in lyrics and in life. The substitution, then, is not merely a joke mocking the trappings of Napoleon’s authority, nor of Ice T’s celebrity.

Wiley’s work has been criticized for using hip-hop as mere fashion in his glitzy paintings, and not engaging with its more subversive or counterculture messages, but by laying hip-hop over old master, by recasting royal scepters as bling, Wiley calls into question the values placed on both. Of course, an expensive watch cannot connote the sort of real power and authority of Napoleon’s staff and sword (both said to have originally belonged to Charlemagne himself). On the other hand, though, the modern accessories that shine out of his canvases invite us to question the role of the gold and jewels so liberally displayed in the ruler portraits he copies. The power of the emperor does not really derive from his scepter. The scepter is nothing but a symbol, and in that sense, how different is it from the bling worn by Wiley’s subjects?