At the beginning of the movie The Godfather, Michael Corleone (played by Al Pacino) wants nothing to do with his family’s involvement in organized crime. When telling a family story to his girlfriend, he concludes, “That’s my family, Kay, That’s not me.” As the film progresses, however, Michael’s father and older brother are the focus of violent attacks and Michael becomes more active in the family business until—at the end of the film—he has assumed the leadership of the Corleone crime syndicate by killing all of his enemies. Fictional characters—both in film and in novels—have arcs. They change through time. The same is true of real characters from history. They often have a rise, but just as often there is a precipitous fall. Napoleon Bonaparte is but one example. A visual starting point could be Jean-Auguste-Dominique Ingres’s 1806 painting, Napoleon on His Imperial Throne (above). In this work, Ingres painted Napoleon as if he were an omnipotent ruler—rather than a mere mortal. But six years later, Jacques-Louis David (Ingres’s former teacher), painted The Emperor Napoleon in His Study in the Tulieries (1812). These two portraits—painted just six years apart—show a significant arc in the life and career of Napoleon. Alexander Hamilton, the Tenth Duke of Hamilton (and sadly, of no relationship to the de facto leader of the Federalist Party in the United States with whom he shares a name) commissioned David to paint The Emperor Napoleon in His Study in the Tulieries in 1811.

Finished the following year, it shows a standing Napoleon, about three-quarters life-sized. He slightly turns his face to look at the viewer, and his right hand is tucked into his uniform jacket (to this day, some jackets often have a vertically zippered pocket on the left side; this is called a Napoleon pocket).

The blue jacket with the white facing and red upturned cuffs and the gold epaulettes identify him as a colonel in the Imperial Guard Foot Grenadiers—a group of elite soldiers that Napoleon personally commanded. The two medals pinned to Napoleon’s left breast speak to the scope of his rule. The leftmost of the two is the Order of the Iron Crown, an organization Napoleon founded in 1805 as the King of Italy. The second medal is that of the French Legion of Honor. Napoleon’s uniform is completed with white knee breeches and stockings, and black shoes with gold buckles. Although he wears a military uniform, this is hardly a military portrait. He has discarded his officer’s sword—it rests on the chair on the right side of the painting—and Napoleon is shown doing the administrative work of a civic leader. He stands between the high-backed red velvet chair on the right and in front of the Empire-styled desk behind him. A gilded regal lion serves as the visible leg of the desk, and an ink-stained quill, candle-lit lamp, and various papers can be seen atop his writing table. 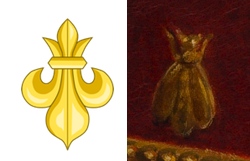 A rolled up sheet of paper with the letters COD can be seen on the right side of the desk. This detail alludes to the Napoleonic Code—the French civil law code Napoleon established in 1804. The bees, which resemble an upside-down fleurs-de-lys, can be seen in the velvet that covers the chair (both the bee and the fleur de lys were symbols of the French monarchy).

David has signed and dated the portrait on a rolled up map to the side of the table, a leather-bound volume of Plutarch (in French: Plutarque) is beside it. Plutarch was an ancient Roman biographer and historian, most famous in the nineteenth century as the author of The Parallel Lives, a text that explores the virtues and vices of Greek and Roman rulers, men such as Alexander the Great, Themistocles, Julius Caesar, and Cicero. The inclusion of this book was a way to visually tie Napoleon to the great rulers of the classical past who he so admired. And yet, not everything is perfect within this space. Signature and book by Plutarch (detail), Jacques-Louis David, The Emperor Napoleon in his Study at the Tuileries, 1812, oil on canvas, 203.9 x 125.1 cm (National Gallery of Art)

Although Napoleon stands and looks out towards the viewer, he looks more disheveled than not. His hair—complete with the gray typical of a man in his 50s—appears unkempt and tousled. In addition, his uniform would hardly pass muster. A cuff button has been undone, and his silken stockings and trousers appear wrinkled from being worn for an exceptionally long working day. This fact is alluded to by two time-bearing details. The grandfather clock displays the time as 4:12. And the candles of his desk lamp—one nearly burned to its completing, another recently extinguished, several others seemingly expired—make it clear that it is not the late afternoon, but rather the very early morning. Clearly, time was running short. This portrait seems to suggest that Napoleon was working too late and too hard at the time it was commissioned, and indeed, Napoleon’s time as a world ruler was coming to a climactic finale. The year the painting was completed—1812—was a particularly calamitous one for Napoleon, as he was in the middle of the disastrous invasion of Russia. Less than two years later, on 4 April 1814, Napoleon abdicated his throne and was exiled to the island of Elba. David skillfully and subtly depicts Napoleon’s  transition from omnipotent ruler to fallible commander. In this regards, David’s portrait can be seen as a painted contemporary version of the Greek sculptor Glykon’s statue, The Weary Hercules, a small bronze copy that David likely saw in the Louvre. Like the mighty Hercules, Napoleon had once been an all-powerful leader. But as Hercules had his downfall at the hands of his jealous wife Deianara, so too did Napoleon have his downfall at the hands of the Duke of Wellington. A failed return to power in 1815 caused Napoleon’s permanent banishment to the island of Saint Helena where he died in 1821. David’s portrait of the ruler in his study, thus constitutes one of the last formal portraits of the great French ruler.

Interactive feature on this painting from the National Gallery of Art

Cite this page as: Dr. Bryan Zygmont, "David, The Emperor Napoleon in His Study in the Tuileries," in Smarthistory, March 5, 2016, accessed September 22, 2021, https://smarthistory.org/david-the-emperor-napoleon-in-his-study-in-the-tulieries/.