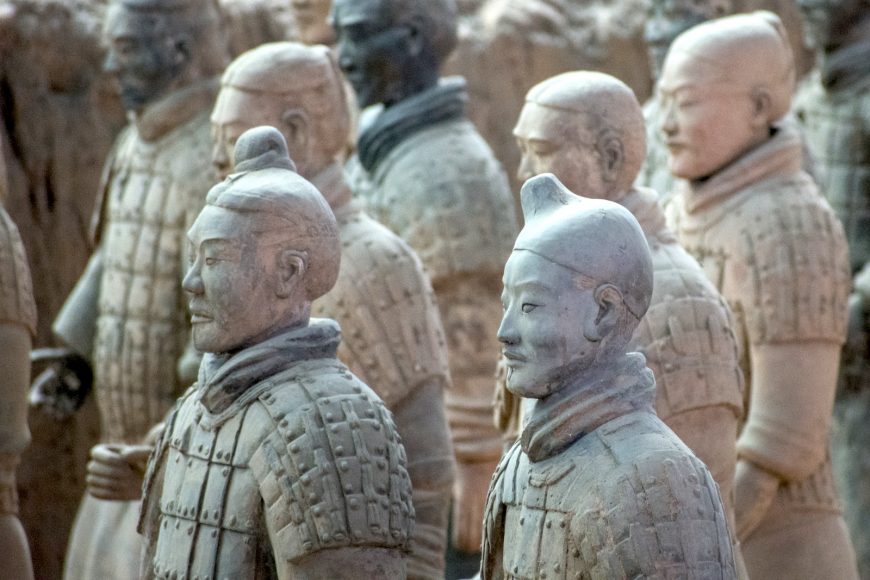 Background: the first emperor of China

The first emperor of China was Qin Shi Huangdi. First, he became king of the Qin (pronounced “Chin”) state at the age of thirteen. Eventually he defeated the rulers of all the competing Chinese states, unifying China and declaring himself “First Emperor of the Qin Dynasty” (Qin Shi Huangdi). He began the construction of his vast tomb as soon as he took the throne, and it took 38 years to finish, even with a reported 700,000 convicts laboring for the last 13 years of construction. These great numbers are, themselves, displays of the tremendous power of the emperor, and the work clearly bears the imprint of their astounding labors.

As emperor, he was repressive —banning and burning Confucian books and executing the scholars who wrote and studied them. Not surprisingly there were at least two attempts to assassinate him. When the tomb was completed, it was covered in grass and trees, so that it would appear like a natural part of the landscape.

Today, from the outside, Qin Shi Huangdi’s burial mound looks like a hill. This explains how the huge tomb could have remained hidden until 1974 when rural villagers accidentally discovered it while digging a well. It blended into its surroundings, looking like a foothill of the Li Mountains. As the plan of the tomb complex shows, the tomb itself was surrounded by a large number of other burials, including three pits containing warriors made from terracotta (which are known today as the “Terracotta Army”) There was also a pit filled with the remains of exotic animals, and the graves of followers executed at the time of the burial.

So far, approximately 7,000 figures made from terracotta and 100 wooden chariots have been discovered in Pits 1, 2 and 3. 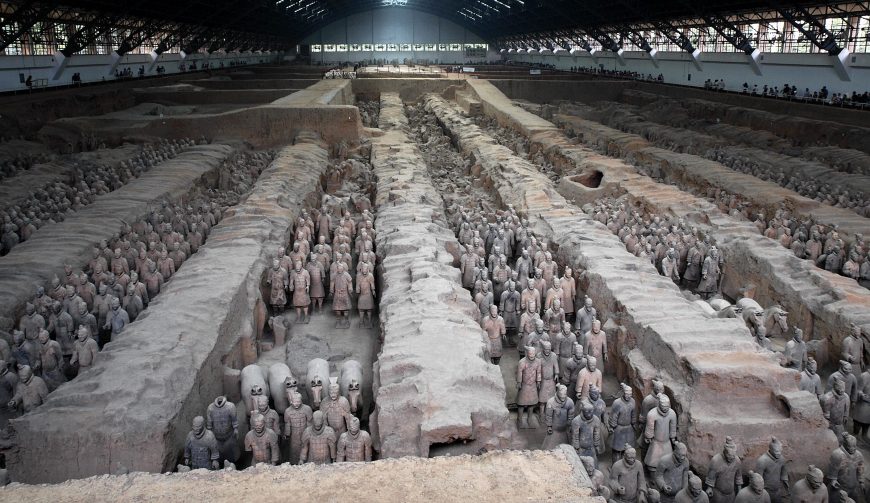 When we look at the vast rows of the 6,000 soldiers of the army in Pit 1 (the largest yet found) we see a view that no one had seen for more than two thousand years — from the time that the tombs were sealed until the excavations of the 1970s. The figures were set into paved channels of earth, reinforced with wooden planks and then buried.

The soldiers are arranged in battle formation, with a vanguard of archers surrounding the bulk of the army. The hands of the archers are now empty, but they originally held wooden bows, of which some traces survive. These wooden bows, along with bronze weapons held by other soldiers, would have given the soldiers a more naturalistic appearance. Front and back view of Kneeling Archer, Mausoleum of Emperor Qin Shi Huangdi

As a whole, the layout and design of the army emphasizes pattern and repetition. The soldiers are all of very similar size — slightly larger than life-— and are standing in repeated poses. They are arranged in consistent rows, which establishes a very regular pattern. It also creates a sense of unity, which is an ideal generally sought by real armies. These soldiers are clearly, through their unified appearances, collectively working to express, enforce and protect the power of the emperor, even as he lies in his grave. There is, though, variety throughout the army, enlivening the whole with small, humanizing differences in features and costume.

The scale of the project is hard to comprehend. This is not a token set of guards around the imperial tomb, but a complete army, from foot soldiers and cavalrymen to generals. To get a sense of these figures, we will look first at an archer from Pit 2. The archer wears a long robe and armor over his torso and shoulders and kneels on his right knee. He originally held a bronze crossbow, a weapon that shot heavier arrows faster and farther than bows.

His armor is quite detailed. The immensity of the labor required to produce the thousands of figures is stressed by viewing the figure from the back, revealing the attention paid even to the sole of his shoe. It bears three different patterns in the tread, to differentiate heel, center and toe. The care taken over such a minor detail emphasizes the power of the patron, and the vastness of his wealth.

Still, while there is great attention to detail, which suggests the individuality of the figures, there are also techniques used to grant the whole composition its consistent and impressive unity. The most obvious method used to create a sense of unity is the depiction of their armor: since they are an army, they are dressed in very consistent uniforms. There are, though, subtler techniques used to suggest that the figures are not actually individual portraits but slightly differentiated versions of a generalized, idealized soldier. The folds of the archer’s clothing, for example, are stylized: we know that the heavy cuts into the surface of the terracotta represent folds in heavy cloth, but they do so in a generalized way, rather than seeming like each was carefully copied from reality.

Individualized but abstracted and idealized

The figure’s face is also at once individualized and slightly abstracted. Its sense of individuality does not come from intense verism, from the rendering of every wrinkle and imperfection, but from the lively and alert expression. All of the features are smoothed out, made angular. Some of the figures bear bushy moustaches and beards or thick eyebrows, but this figure’s features are all more minimally presented. The halves of his moustache are flat planes, and his eyebrows are smooth ridges.

All of the artist’s efforts here seem to be focused on his watchful state. The figure, like all of the thousands at the site, is idealized. The archer appears to be youthful and strong. His face is highly symmetrical, though this is humanized by his off-center top-knot of hair. He, like all those around him, is an ideal soldier to serve in the emperor’s imposing army.

Equally impressive are the great chariots, including the war chariot. These were found just outside the actual burial of Qin Shi Huangdi (which remains unexcavated at this time). Two bronze chariots were found, one considered a war chariot and the other a peace chariot. Both chariots were found in fragments but have been restored. They are about half life-size, and intricately designed. The war chariot contains gold and silver embellishments on the canopy pole and the horses’ bridles, as well as other parts of their tack. The horses are depicted in much the same style as the terracotta figures, with a delicate balance between naturalism and stylization. Their heads and bodies are somewhat generalized, so that we do not see veins or tendons standing out beneath the hide, for example, and yet they are still quite lively. Their ears are perked up as if with attention, their heads tossing as they bite their bits. They were originally painted white, with red tongues, which would have granted them an even more lively appearance.

The horses, like the soldiers, are each individualized, and yet clearly all part of a cohesive team. They are all of the same size, and wear similar gear, but they differ in subtleties of the nostrils and eyes, for example. A crossbow hangs within easy reach of the driver, elaborately decorated with patterns. A quiver containing 54 bronze arrows of two different types — diamond-shaped and flat tipped — was found hanging from the inside of the chariot’s rail. Once the emperor died and his dynasty was quickly disintegrating, mobs plundered the tomb and took the weapons because they could be used.

The burial of Qin Shi Huangdi reflects the worldly power of the emperor. In ancient China, very elaborate burials were standard features of imperial court practice, and were copied by lesser members of the aristocracy, as well. In the earlier Shang Dynasty (c. sixteenth-eleventh century B.C.E.), rulers were buried with lavish possessions (as well as with their servants — human sacrifices were also common in the Shang Dynasty, and continued through successive periods).

By the time that Qin Shi Huangdi commissioned his elaborate tomb, these practices were already ancient, and set the precedent for his ritual specialists to follow. Sima Qian’s Shiji (Historical Records) provides an account of the tomb (Sima Qian is considered the first major historian of China; he wrote during the Han Dynasty that succeeded the Qin). His description attests to the continued practice of human sacrifices, as well as the to great measures taken to secure the tomb against raiders seeking its riches.

The tomb vault was dug through three underground streams and the coffins were cast in copper. Palaces were built within the burial mound and the burial chamber itself was a rich repository full of precious and rare treasures. Artisans were commanded to contrive gadgets controlling hidden arrows so that if tomb robbers approached they would be bound to touch the gadgets and so trigger the arrows. On the floor of the vault mercury representing the rivers and seas was kept flowing by mechanical devices. The dome of the vault was decorated with the sun, moon and stars, and the ground depicted the nine regions and five mountains of China. … At the entombment the Second Emperor decreed that it was not fitting that the childless concubines of the First Emperor should be allowed to leave the imperial palace and should all be buried with the Emperor. Thus the number of those who died was very great.As quoted in Zhang Wenli, The Qin Terracotta Army: Treasures of Lintong (London: Scala Books, 1996),
14-16. Like most imperial burials in China, Qin Shi Huangdi’s burial chamber remains sealed, and so this early account of its vaults and surroundings has not yet been confirmed (though there are heavy concentrations of mercury in the soil around it, suggesting at least some accuracy).

But why would an emperor wish to be buried with a terracotta army, with bronze chariots and teams of horses, and even with his concubines?

In ancient China, death was seen not as the complete end to an individual but rather, a new stage in life. Therefore, the army was intended not only to demonstrate the emperor’s power in this life, but also to extend that same power into the world of the dead.

Admittedly biased Confucian historians of later dynasties describe Qin Shi Huangdi as paranoid, though the two documented attempts on his life suggest that some fear would not have been irrational. Desiring to preserve his power eternally, he had the ideal army constructed, and placed to the east of his tomb — the direction of his enemies in life.

This massive project should be seen in the context of Qin Shi Huangdi’s other efforts, including the beginning of the Great Wall of China, built to keep out northern invaders in the world of the living. The first emperor gained unified control over China through military force, censorship of information and ideas, and a strong defense against outside forces. Having accomplished this, he then worked to ensure that he would continue to hold such worldly power — even after his death.