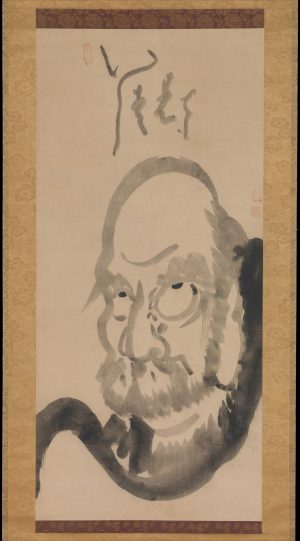 Naturalism is resemblance to the “real world,” as we see it around us. The more naturalistic a work, the more it looks like our world, and the less naturalistic, the less so.

For extremes, we will compare a work by Caravaggio with a work by Hakuin Ekaku, a Japanese Zen Buddhist monk. Caravaggio’s Italian Baroque The Doubting of Thomas is highly naturalistic, whereas Hakuin’s portrait of Daruma rejects naturalism. Both paintings are representational, which means that they both depict something, as opposed to non-representational works like Pollock’s Autumn Rhythm (Number 30), where there is no visual picture hidden in the lines.

In Caravaggio’s image, the face of Thomas, who leans down to look directly at the wound in Jesus’ side, is rendered in minute, realistic detail. His hairs are individually rendered, his features distinct and recognizable, his skin browned from the sun and with dirt.

Caravaggio found his models for holy figures in the streets, and their humble conditions are carefully depicted in his paintings. All this adds up to naturalism, and perhaps even to the highest degree of naturalism, referred to as verism.

Ekaku’s portrait of Daruma, on the other hand, is recognizable as a human face, but all the elements have all been rendered somewhat abstractly — that is, in some way deviating from or ignoring the natural world, simplifying or altering it for effect. We might also say that Ekaku’s image is stylized — designed according to the principles of a particular style rather than being beholden to the way things look in “the real world.”

This does not make it less “good” as a work of art, and also does not mean that the artist was less skilled. Rather, it is simply a different, less naturalistic style, designed to suit different goals. Here, the emphasis is not on the great Buddhist sage’s literal appearance (he died over a millennium before this work was made), but on his wisdom, embodied in his giant, upturned eyes and vast forehead. Kazmir Malevich, Painterly Realism of a Boy with a Knapsack – Color Masses in the Fourth Dimension, 1915, oil on canvas, 71.1 x 44.5 cm (The Museum of Modern Art) The farthest extent of abstraction is non-representational or non-objective art, in which the subject is not merely abstract, but wholly absent.

This type of art, which many viewers find highly challenging, makes little or no reference to the natural world, such as Kazimir Malevich’s geometric paintings such as Painterly Realism of a Boy with a Knapsack – Color Masses in the Fourth Dimension.

In such works, we are in a purely formal world, with no recognizable subject in the work but the work, itself, and where the tools of visual analysis are the only points of entry into the work.

There is one other way, though, that we can speak of naturalism. Instead of contrasting it with abstraction, we can contrast it with realism.

We can see that the Doryphoros is highly naturalistic, in that he looks very much like a living person. On the other hand, he presents his culture’s physical ideal of symmetry, youth, fitness, and, indeed, relaxation.

If we are being honest, we would have to admit that while a person could look like this, rather few of us do. It is therefore highly idealized. In this sense, the work lacks realism — since, in a way, according to ancient Greek views, it is too perfect.

Let’s take another example — a fourteenth century Japanese painting, The Second of the Sixteen Rakan (Rakan are figures in Buddhism who protect Buddhist law and bless donors). Here the figure does not appear naturalistic, in that the work is clearly a painting, with a loose style and exaggeration of features.

On the other hand, the work is highly realistic, in that the artist has presented us with a figure that is ordinary or even slightly grotesque, rather than idealized. He is old, wrinkled and bent, his earlobe hanging low (stretched out by large gold earrings) as a marker of his past wealth. His clothes are rumpled, his socks slipping downward. While the image is not very naturalistic, it is still highly realistic.

Disentangling naturalism from realism is tricky, and the terms are sometimes used interchangeably, despite their important differences.

Alternately, a work might be abstracted and realistic, like the Second Rakan, or abstracted and idealized, like St. John in the Lindisfarne Gospels). A diagram presents the nexus of these terms, and we might plot just about every work of art in this book somewhere within it . Some works, of course, like those by Duane Hanson, have both forms of naturalism.

His life-size sculptures of people revel in their ordinary nature, and are also startlingly lifelike — veristic — so much so that they are frequently mistaken for real people when on display in museum exhibitions.

I have been fooled by two of them, over the years. One was dressed as a museum guard and another as a workman. Even though I had seen Slab Man dozens of times, when his gallery was under construction and he was surrounded by carts of equipment and tools, I was fooled anew.