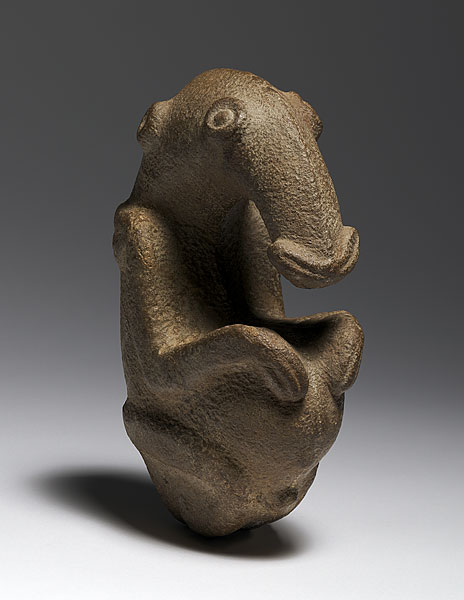 The Ambum Stone is a masterfully crafted stone carving, created around 3,500 years ago in the highlands of the island we now know as New Guinea. Who actually carved it and for what original purpose is not known. Nevertheless, the Ambum Stone had a life as a religious object for a group of people in Papua New Guinea before becoming an aesthetically beautiful and intriguing artifact of exotica in a Western gallery. More recently it suffered a mishap that left it broken, and the publicity around this thrust the Ambum Stone into ongoing political debates about who owns historical artifacts. Every chapter of this carving’s history has been entangled with personal and political intrigue, and chronicles a bigger story about colonization and shifting and evolving structures of power. 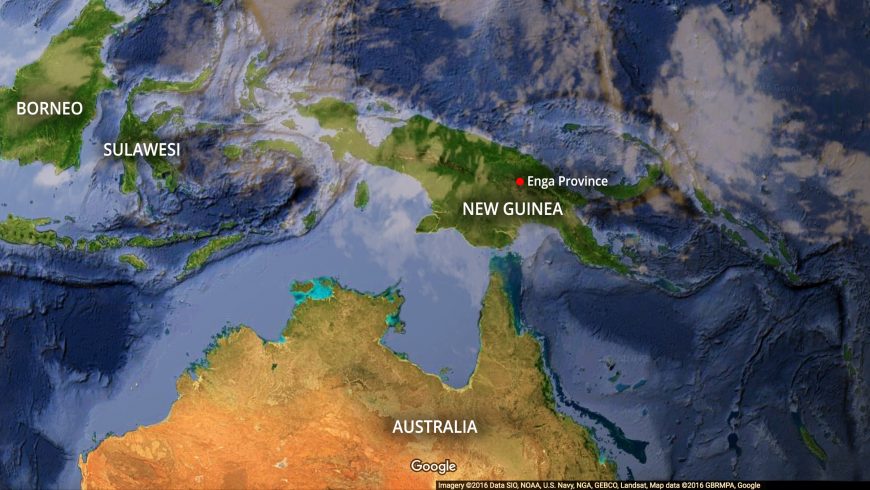 There are 12 recorded artifacts like the Ambum Stone: ancient stone mortars and pestles excavated from New Guinea, usually from the mountains of its interior. The smoothly curved neck and head of the Ambum Stone suggest its possible utility as a pestle when we consider its size—at about 8 inches high, the “neck” of the creature it depicts can be held in the hand, and its fat base could have been used to pound food and other materials. The tops of other ancient pestles from New Guinea are distinguished by human or bird heads, or by fully sculpted birds, while the mortars also include geometric imagery alongside avian (bird) and anthropomorphic (human) depictions.

The Ambum Stone is prized above all others not only for its age—it is one of the oldest of all sculptures made in Oceania—but also for its highly detailed sculptural qualities. It has a pleasing shape and smooth surface, and the slightly shiny patina on some of its raised details suggest it has been well handled. It was made from greywacke stone, and its finished shape may suggest the original shape the stone it was carved from. Greywacke is a very hard sedimentary stone, which often has fracture lines and veins that reveal its age and formation. Much greywacke has been subjected to significant amounts of tectonic movement, pressure and heat over extended periods, and some of the greywacke in the islands of the Pacific is more than 300 million years old. Imagine carving something as symmetrical and aesthetically pleasing as the Ambum Stone using only stone tools. It must have taken its maker many months to chip out the rough shape then finish it carefully, and the time and effort involved in its making suggests it was special and valued by whomever it was made for.

Carved in the form of some kind of animal, its features are rounded and include a freestanding neck, elegantly curved head and long nose, and upper limbs that hug its torso and appear to enclose a cupped space above its belly. Stylized eyes, ears and nostrils are depicted in relief, and shoulder blades and what could be an umbilicus suggest the maker’s understanding of anatomy. While it is possibly a fetal-form of a spiny anteater known as an echidna, which is thought to have been valued for its fat prior to the introduction of pigs, it might also be a bird or a fruit bat, and some have speculated that it represents a now extinct mega-sized marsupial. 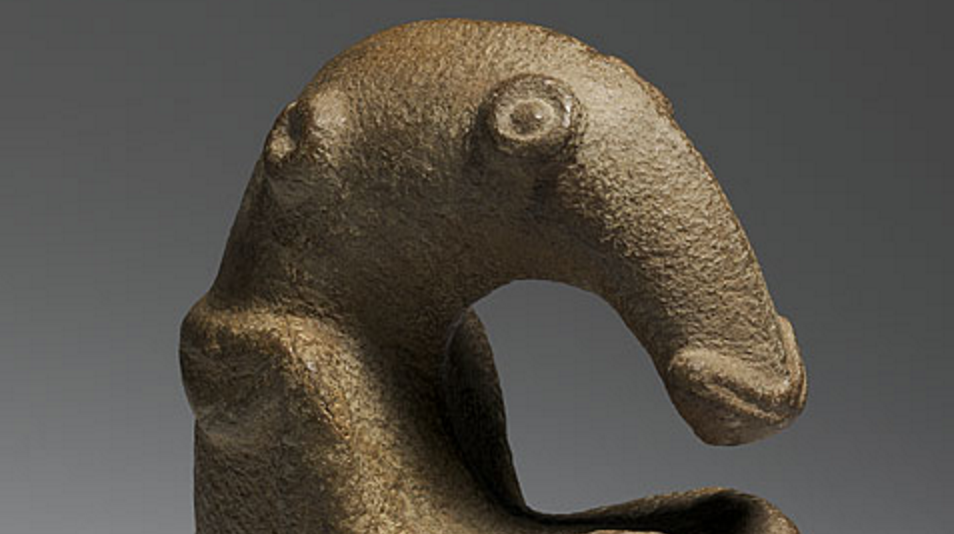 Ritual use in Papua New Guinea

When the Ambum Stone first became known to Westerners in the 1960s, it was being used by a group of people called the Enga who live in the western highlands of Papua New Guinea. For the Enga, the Ambum Stone and other objects like it are called simting bilong tumbuna which literally translates as the “bones of the ancestors.” [1] This is the Enga term for a class of cult objects which were used as powerful ritual mechanisms where ancestors reside. While the ritual object is not actually an ancestor per se, paradoxically, such sacred objects are believed to have a life of their own, and they can even move around, mate, and reproduce. It would seem—for the Ambum Stone at least—they can also go on adventures and create controversy.

Enga society is based on an organizational power structure known as the “big man” system, and the negotiation of power depends on commanding natural resources like pigs and produce, as well as supernatural forces like the goodwill of the ancestors (or the Christian God). Power is vested with those “big men” who can cajole, organize, or even manipulate other people into giving them resources so these can be redistributed at big ritual events. Before the Enga decided to convert to Christianity in the wake of the arrival of missionaries and colonization in the 1930s, the Ambum Stone and other objects like it were imbued with supernatural powers through ritual processes. They were buried in a group’s ancestral land and regular sacrifices of pigs were needed to appease the stones and the ancestors that resided in them. With the appropriate care they could ward off danger and promote the fertility and vigor of the tribe and the land. 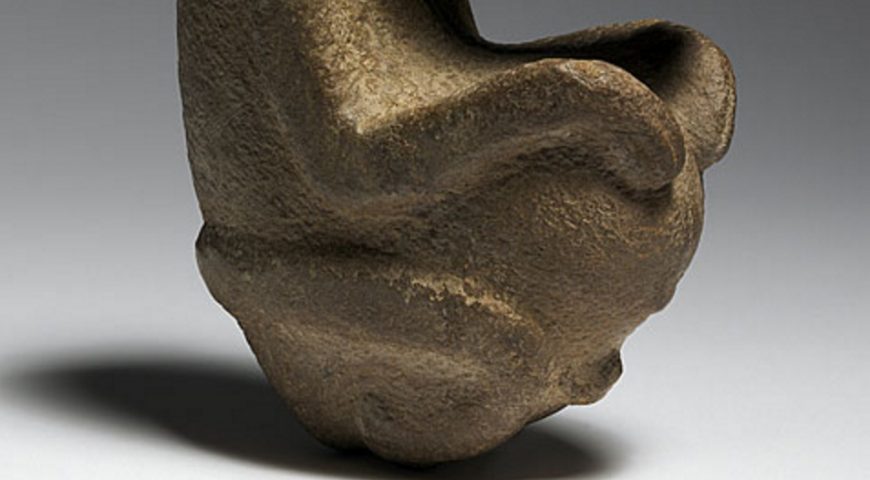 When Christian missionaries arrived in Papua New Guinea, people largely embraced the new religion, the new system of power that came with colonization, and the consequent Australian administration. The big man system was maintained but the way of managing the supernatural took on a Christian guise. Objects like the Ambum Stone lost some of their former potency, but under the “Whiteman’s gaze” they acquired new parameters of value as “primitive art” and were therefore worth money.

The Ambum Stone came to distill exoticism, imbued with all the romance perceived by Westerners in the stark differences of Papua New Guinean ways of seeing the world, and evoking a primitivism and purity lost to the West. This exoticism was enhanced by its specific dimensions and proportions that meet a certain aesthetic ideal from a Western point of view. All of this, its “primitive” and aesthetic value drove its pathway through a murky set of transactions, culminating in its acquisition by the Australian National Gallery in 1977, where it is valued as a priceless antiquity.

Originally sold by two young boys (at the urging of resident missionaries) for 20 shillings to the European owner of the trade store in Wabag (Enga Province), it was then sold by an intermediary to Philip Goldman, a London art dealer. Goldman subsequently offered it to the British Museum, before selling the sculpture to the Australian National Gallery in Canberra, Australia. In his negotiations with the Museum and by way of justifying his asking price, Goldman compared the Ambum Stone to Jackson Pollock’s Blue Poles which the gallery had purchased a few years earlier: basing the “primitive” Ambum Stone’s value on that of a work of modern art. Eventually, the Australian National Gallery agreed to pay Goldman $115,000 United States dollars for the stone. 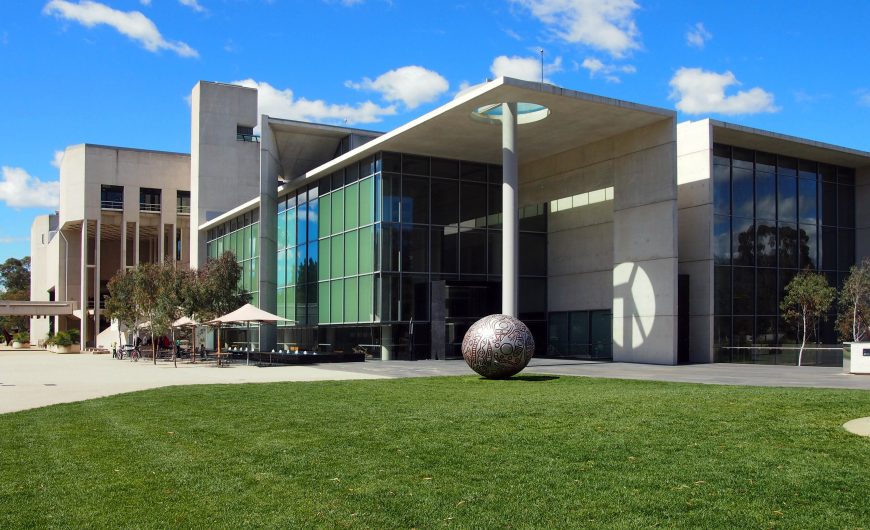 Many objects of New Guinea’s historical material culture were shipped to foreign museums and galleries for “safe keeping.” Other desirable or even potentially valuable objects were smuggled out illegally. In 1977, the legal standing of the Papua New Guinea state to reclaim objects of national significance was bolstered by the opening of the Papua New Guinea National Museum and Art Gallery, complete with state of the art storage and exhibition facilities. It was staffed first by Europeans who in turn trained Papua New Guinea nationals in museum management who were politically and philosophically intent on having antiquities returned to Papua New Guinea. Over the years the Papua New Guinea Museum and Art Gallery has perfected its systems of export control and its capacity to enact legal proceedings against those intent on taking antiquities out of the country. They have also been able to successfully negotiate the return of objects and whole collections that were sequestered away for safe keeping elsewhere in the world. Nevertheless, there are limits to their ability to enforce the return of objects such as the Ambum Stone.

In 2000, while on loan to a French art museum, the Ambum Stone was accidentally dropped and shattered into three main pieces and various shards of stone. It was later discovered by conservators, as they pieced it back together, that what had previously been thought to be old breaks, mended while in Papua New Guinea, were actually fracture lines of the greywacke stone. Fissures and grooves containing organic material were examined and were used to suggest its date of 1500 B.C.E. The Ambum Stone was carefully repaired, but other damage had been done. News of the incident made it into international media, which in turn generated the discussion about what the Ambum Stone—a registered antiquity belonging to Papua New Guinea—was doing in the possession of an Australian gallery in the first place. Whilst the Ambum Stone remains in Canberra, arguably the controversy over this artifact has meant that Papua New Guinea’s capacity to negotiate at the global level has been bolstered.

At the heart of the recent chapters of the story of the Ambum Stone is a narrative about colonialism and its legacy. The Ambum Stone was made and imbued with particular meanings and values by a group of what we now know as Papua New Guineans, and then relocated to a Western museum where it has been reinterpreted within a framework of aesthetics and exchange, where we continue to marvel at it—and exoticize it—because of its origins, and the mysteries we perceive in the pages of its story, remain closed to us.

[1] Egloff, Brian, Bones of the Ancestors – The Ambum Stone: from the New Guinea Higlands to the Antiquities Market to Australia (Lanham: Altamira Press, 2008), p. 1.

This sculpture at the National Gallery of Australia, Canberra

Conservation and repair of the Ambum Stone (National Gallery of Australia, Canberra)

Egloff, Brian, Bones of the Ancestors – The Ambum Stone: from the New Guinea Higlands to the Antiquities Market to Australia (Lanham: Altamira Press, 2008).