Tipu’s Tiger
Global trade and an 18th-century Anishinaabe outfit
The European Palaces of the Qianlong Emperor, Beijing
Fourteen portraits of the Inka Kings

Introduction to the Spanish Viceroyalties in the Americas
Alejo Fernández, Virgin of the Navigators
The Medici collect the Americas
Atrial Cross at Acolman
The manuscripts of Luis de Carvajal

Hagia Sophia as a mosque
The David Vases
African art and the effects of European contact and colonization
Kilwa Kisiwani, Tanzania
Lusterware as luxury
At the crossroads of Eastern and Western Christianity: the church of St. Nicholas

The Staff God at Chavín de Huántar and beyond
Multilingualism along the Nile
Temple of Baalshamin, Palmyra
Petra: rock-cut façades
Gold and jade crown, Silla Kingdom Art for the initiated

The artistic style seen in stone sculpture and architectural decoration at the temple site of Chavín de Huántar, in the Andean highlands of Peru, is deliberately complex, confusing, and esoteric. It is a way of depicting not only the spiritual beliefs of the religious cult at Chavín, but of keeping outsiders “out” while letting believers “in.” Only those with a spiritual understanding would be able to decipher the artwork. 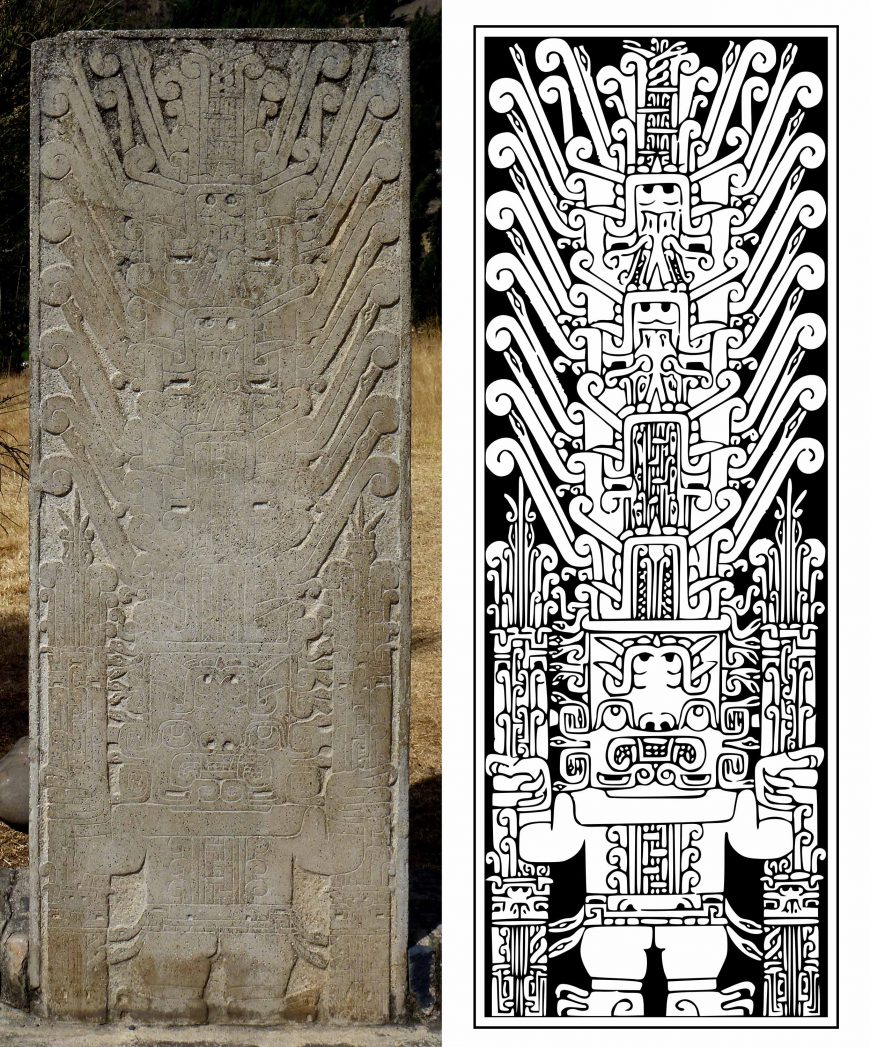 The Raimondi Stele from Chavín de Huántar is an important object because it is so highly detailed and shows Chavín style at its most complex. It is easiest to see in a drawing, because the original sculpture is executed by cutting shallow but steep lines into the highly-polished stone surface, making it very difficult to make out the incised image. This style is deliberately challenging to understand, thereby communicating the mystery of the Staff God, and creating a difference between those initiated in the religion who can understand the imagery, and outsiders who cannot.

The stele (see video directly below) shows the god holding staffs composed of numerous curling forms. Beneath the god’s hands we see upside-down and sideways faces, and the staffs terminate at the top in two snake heads with protruding tongues. The god’s belt is a compressed, abstracted face with two snakes extending from where the ears should be, perhaps substituting the snakes for hair, and turning the face with its snake-hair into a belt. The god’s hands and feet have talons rather than human fingernails, evoking felines and birds of prey.

These are references to animals that would have been exotic rumors to the people of highland Chavín: the jaguar, the harpy eagle, and the anaconda are all animals that dwell in the lush tropical jungle over the Andes mountains to the east. They are all apex predators, possessing physical qualities like strength, flight, and stealth that become metaphors for the power of the Staff God. Other supernatural imagery from Chavín includes images of caimans, crocodile-like animals that also inhabit the eastern jungles. Most people would never have seen these creatures, rendering them mythical in their own right, and suitable for depicting the mysterious nature of the god.

The god’s face is actually composed of multiple faces (see video directly below). The eyes in the center looking upward are above a downturned mouth sporting feline fangs, but beneath that we can see another upside-down pair of eyes and a nose tha­t use the same mouth. This is an artistic technique known as contour rivalry, where parts of an image can be visually interpreted in multiple ways. A similar thing is taking place on the god’s “forehead,” where we see another upside-down mouth with four large fangs protruding from it, which when associated with the eyes in the middle completes a full face. Above this multi-faced head is what appears to be an enormous headdress, which is composed of more faces that also multiply using contour rivalry, and have extensions emanating from them that terminate in curls and snake heads.

This intricate and confusing style was not just used for large monuments at Chavín. Smaller carved, decorative elements of the site’s architecture also display these kinds of supernatural figures. The two stone slabs seen below are examples of the kinds of sculptures found in cornices and other architectural elements at Chavín.

One of these depicts a standing figure with snakes for hair. It sports the same protruding fangs we see in the upside-down heads above the Staff God’s face. Large pendant earrings rest on its shoulders, and in its hands it holds two shells: a Strombus in its right hand and a Spondylus in its left. Spondylus shells are not native to Peru; they thrive in the warm coastal waters of what is now Ecuador, hundreds of kilometers from Chavín. Early on in the history of the Andes, there was a brisk trade in these shells as luxury items. Strombus can be found in Peruvian waters, but that is the southernmost reach of their range—they are more common in the north. A great number of carved Strombus shells turned into trumpets (called pututu) have been found at Chavín. Far from the ocean, these shells symbolized water and fertility. Furthermore, the Strombus is frequently associated with masculinity, while the Spondylus has feminine associations. The two together therefore signaled generative fertility and the power of the cult to foster agricultural prosperity.

A second carved figure is more enigmatic, and is full of contour rivalry. The main figure appears to be composed of the head to the right, attached to a body with round spots, probably alluding to a jaguar. However, behind the head is another eye, nose, and fanged mouth, and the jaguar spots are joined by an eye with a profile mouth with fangs. Thus, what appears to be one creature at first glance may be as many as three. At the bottom left, we can see another fanged mouth, this one upside-down, but because the stone is broken, we’ve lost its context.

The spread of the Staff God

The image of the Staff God would spread throughout Peru. The imagery’s geographic reach gives us some insight into the contact between distant areas and the diffusion of imagery. Once thought to show the expansion of the cult of Chavín, today scholars are more hesitant to draw direct relationships between Chavín influence and these far-flung images. The Staff God may have had its roots in earlier cultural styles, including the one known as Cupisnique, making Chavín just one of many expressions of this deity. The Staff God’s imagery traveled extensively, far beyond the areas already mentioned. A Cupisnique gold crown from Chongoyape, Peru, also demonstrates the Staff God’s reach. The crown depicts a version of the god that is simpler than that seen in the Raimondi Stele, but it still uses contour rivalry and the trademark fanged mouths.

A painted textile fragment with the Staff God is thought to be from the southern Peruvian coast, hundreds of kilometers from Chavín (which is in the highlands). It is woven from cotton, which is a coastal agricultural product, and distinct from the camelid wool that came from the highlands. The Staff God here is shown with the head in profile, and with snakes emerging from the top of the head, with a feline-fanged mouth, snake belt, and taloned hands and feet. The figure is enclosed in a knot-like shape, composed of supernatural figures that blend snake and feline attributes. Other southern coastal textiles with Staff God imagery have been found, including some that render the Staff God as explicitly female, showing how this religious imagery transformed as it traveled. The image of a divine figure holding staffs or similar objects in its hands would persist in Andean art long past the time of Chavín. The so-called “Sun Gate” at the site of Tiwanaku, near lake Titicaca in modern-day Bolivia, is 748 miles (about 1200 km) from Chavín. It dates from around 800–1000 C.E., and so is separated by at least a thousand years from the Raimondi Stele. However, like the Stele, it features an abstracted and intricate style that separates believers from outsiders. Tiwanaku style is more angular than Chavín, and the Sun Gate has a strong gridded organization that adds to the geometric feel. The central figure of the Sun Gate, while sharing the frontality of the Staff God and the familiar pose (arms at the sides, elbows bent, and vertical objects in its grasp), is also different from earlier iterations. The head is disproportionately large, rendered in a higher relief than the rest of the figure, and features projecting shapes that may represent the rays of the sun. Some terminate in feline heads in profile, a change from the earlier serpents seen at Chavín, Chongoyape, and in the textile fragment. In its hands it holds projectiles and a spear-thrower—weapons rather than elaborate staffs.

The Sun Gate figure stands atop a stepped pyramid shape with serpentine figures emerging from it, a representation of the Akapana pyramid, which mirrored the nearby sacred mountain Illimani not only in shape but by having a series of internal and external channels that allowed rain water to cascade down the side of the structure like the above-and below-ground rivers of the mountain. Not only does it stand in the same pose as the Staff God; it, too, is associated with natural forces, like the mountain, the sun, and the waters of Illimani. The feline heads terminating the rays from the figure’s head are joined by the bird-human hybrid “attendant” figures in the rows to either side.

The meaning of the Staff God image was likely different in each of the places it has been found, an image of the sacred that came from afar and was adopted and adapted to the needs of the local people. In each case, however, we find that the intricate and often inscrutable imagery was a way of keeping believers separate from outsiders.

Cite this page as: Dr. Sarahh Scher, "The Staff God at Chavín de Huántar and beyond," in Smarthistory, November 4, 2020, accessed March 1, 2021, https://smarthistory.org/the-staff-god-at-chavin-de-huantar-and-beyond/.