In her Memoirs written in 1680, a person who went by Madame d’Aulnoy—presumably a French noblewoman visiting the Spanish court—wrote with dismay that Spanish ladies drank “six cups (of chocolate) one after another, and this they do very often twice or thrice a day.”[1] The vogue for this (at the time) exotic beverage is depicted in Antonio de Pereda’s Still Life with Ebony Chest, one of a series of still lifes he painted in the second half of the seventeenth century in Madrid.

The picture represents a group of objects related to the preparation, display, and consumption of chocolate. But why should we care about a bunch of painted vessels and other mundane things? In Still Life with Ebony Chest, Pereda visually elevates these seemingly insignificant objects, arranging them on a slightly tilted table so that they appear to tower over the viewer, while theatrical lighting adds drama to the scene. The table is covered with a red velvet cloth, a color associated with the monarchy and a staple of royal portraiture at the Spanish court. All of this contributes to the visual glorification of these objects—and by implication, of the social custom they illustrate.

The painting in fact represents what you would find if you were invited to a merienda (or afternoon snack) at a well-appointed home in seventeenth-century Madrid: one or more cups of chocolate made from cocoa from Mexico—which at the time was under Spanish control—and pastries served in wares from all over the world. The painting thus stands as a document of one of the most popular social rituals of the Spanish nobility, as well as the global dimensions of its rich material culture in the seventeenth century. Still life in the seventeenth century 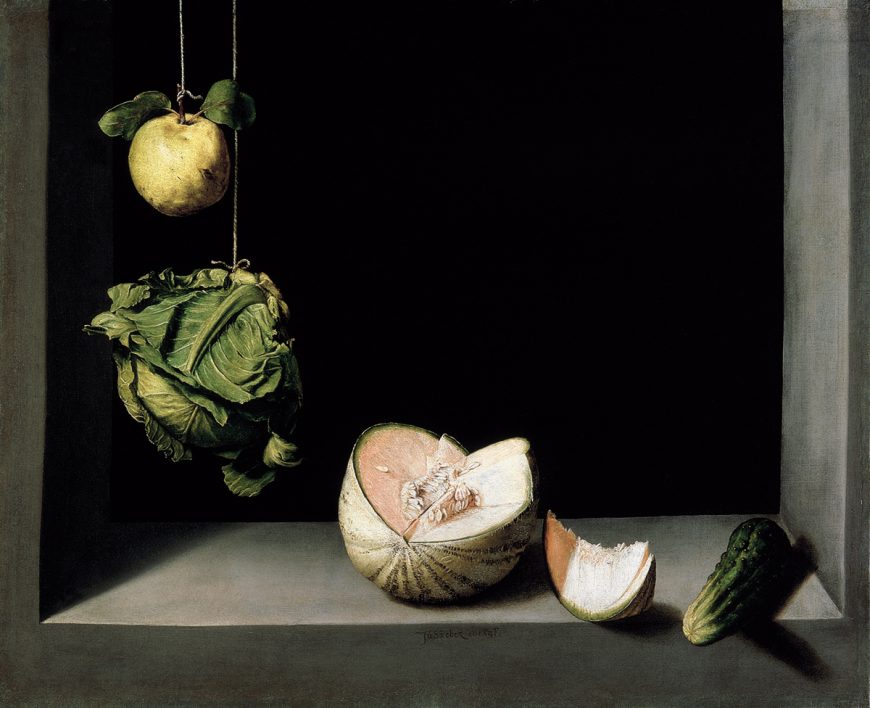 Some people today may think that still lifes are dull and meaningless, but in the seventeenth century they were among the most exciting genres of painting. Known to have existed in antiquity only through written descriptions, the painting of fruits, vegetables, and other inanimate objects appeared new and fresh to artists and audiences of the seventeenth century, accustomed, as they were, to paintings that portrayed edifying narratives based on the human figure. We don’t know exactly where the first independent still life was painted, but a number of examples with similar characteristics seem to have appeared simultaneously in Spain, Italy, and the Netherlands at the turn of the 17th century. Juan Sánchez Cotán in Spain, Fede Galizia in Italy, and Clara Peeters in the Netherlands are among the first artists who established the conventions of the new genre: a few objects set against a neutral background painted with unprecedented naturalism and meticulous detail. Although for much of the twentieth century scholarship was concerned with stylistic evolution and religious symbolism in these paintings, today there is a growing interest in approaching them from the perspective of material culture. This means not only asking questions about how the pictures functioned in their original contexts, but also examining the cultural significance of the objects they represent.

A painting of global dimensions Pereda’s picture probably hung on the walls of a well-to-do Madrilenian household in which meriendas involving chocolate must have been common. It presents a rich collection of objects of different provenance. Starting on the left, you’ll notice a pear-shaped copper vessel with a wooden handle. This is a chocolatera or chocolate pot, and next to it there is a wooden whisk to stir the chocolate and make it frothy. In the seventeenth century, chocolate was still an exotic product, although it had been introduced to Spain from Mexico during the century before. The Aztecs—who considered the beverage precious and used it in religious rituals—drank the cocoa unsweetened, but once it was brought to Europe, it was substantially transformed. Spaniards added sugar and spices and made it the center of elite social gatherings.

In his picture, Pereda alludes to these get-togethers with the inclusion of a wide array of wares. In front of the chocolatera you can see a silver tray with three cups and a spoon. The three cups—called jícaras, from the Nahuatl xicalli—were used specifically to drink chocolate, and according to some scholars, each of them has a different origin: the blue cup is probably from Delft in the Netherlands (although imitating Chinese porcelain), the small lusterware (a technique used in Muslim Spain) bowl is from Manises in eastern Spain, and the larger one in the back is from China. Next to the tray there is a plate full of pastries, probably for dipping in the chocolate, and next to this are several wooden boxes containing cocoa paste. Behind the boxes there is a vase with two handles from Talavera in central Spain, and in the foreground on the lower right there is a piece of cheese or sugar to complement the chocolate (in Colombia people still drink their chocolate with cheese today). The small piece of furniture that centers the composition is an ebony chest decorated with ivory: a luxury object used to keep treasured belongings such as chocolate. It is made of exotic materials— ebony, likely from India, Angola, Gabon, or Indonesia, and the ivory, made of the tusks of African or Indian elephants. Notice the set of keys hanging from the first slightly open drawer, and the intricately woven cloth. The latter—perhaps produced in Guatemala, Mexico, or even China—was known as paño de chocolate ( “chocolate cloth”) and was used to wipe chocolate foam from one’s mouth or the spoon before drinking. The reds in this cloth lead us toward two bright red vessels resting on the chest. These pots are two types of so-called búcaros, earthenware vessels used to cool water and appreciated for their aroma and taste. Spanish women (and sometimes men) ate little pieces of these wares as if they were candies, and some believed they had special properties, such as the ability to whiten the skin or prevent pregnancies. Although they were originally from Portugal, by the seventeenth century búcaros were also produced in several Spanish American colonies. In Diego Velázquez’s celebrated Las Meninas, the infanta Margarita is portrayed receiving a small búcaro. Scholars have identified the shorter, simpler búcaro in Pereda’s painting as being from Guadalajara, Mexico, and the larger one—called enchinado because it is decorated with small fragments of quartz—as likely being from Chile.

Additionally, we find a black vessel with silver mounting that is probably of European origin, a transparent glass vessel with water or aloja (an aromatic wine from Southern Spain), and a lacquered (a Japanese technique) gourd cup decorated with flowers and winged figures of Mexican or Italian origin.

These objects exemplify how people in the seventeenth century interacted with a global world in their daily lives and, more specifically, how elite Spaniards enjoyed the fruits of the large Spanish empire. Some of these connections were quite complex and are wonderfully illustrated here: The Delft jícara, for instance, is a ceramic cup made in the Netherlands, imitating Chinese designs, and used to drink chocolate from Mexico in a Spanish household.

The owner of this painting must have been proud to have such an array of worldly goods represented in a painting that was itself a precious possession. The painter’s task, in turn, was to represent these objects as faithfully as possible: on the one hand, so that the viewer could identify the objects; on the other, to show that painting can imitate all the other crafts. Notice how carefully Pereda imitates other materials and how he shows off his skill by depicting the way these materials are reflected on various surfaces. Red and black are reflected on the glass vessel and the whisk is visible in the surface of the silver tray. If you look closely, you can see Pereda’s signature in one of the boxes. From the perspective of the artist, the painting seems to be a celebration of global craftsmanship as much as his own.

This work at the Hermitage Museum

Essay on still-life painting in Southern Europe, 1600-1800 from The Metropolitan Museum of Art’s Heilbrunn Timeline of Art History

“A Brief History of Chocolate” from Smithsonian Magazine