In the Hell panel of Hieronymus Bosch’s Garden of Earthly Delights triptych, an anthropomorphic, fully clothed hare blows a hunting horn, the hunted aping the hunter. A naked man, penetrated by a recorder, carries an oversized shawm (wind instrument) on his back, apparently suffering under its weight, his posture reminiscent of Jesus’ in images of Christ carrying the cross. At left, a naked figure is bound to the neck of an elegant lute. Bizarre as these ghastly scenes may appear, they actually have a certain logic. In fact, they respond to a vast and surprisingly consistent body of global medieval musical images, examples of which we will explore below. If anything, the Boschian scene leverages the instrument’s usual associations with melodious, soothing music and puts an ironic twist on the sacred to visualize the profane.

David and his harp

In Bosch’s triptych, a finely crafted harp protrudes at an angle from the broken rosette of a lute. A slick, black, reptilian tail curls around the wooden frame of the harp, boring a hole through its top. The gargantuan string instrument becomes an instrument of torture, its delicate, taut strings running clear through the body of a naked figure—one of the damned. The detail sends a moralizing message—condemning some forms of instrumental music as sinful. And yet, more innocuous visual representations of harpists also abound in global medieval art, demonstrating that string instruments frequently referred to praising God rather than sinful worldly pleasure. A similar harp appears in a Dutch vernacular Book of Hours produced in Utrecht a few decades before Bosch painted his triptych. In the lower margin of one page, the biblical King David strums a contemporary harp. In medieval Judaism, Christianity, and Islam, the psalms were attributed to David, and multiple sacred texts associated with the Abrahamic faiths attested to David’s musicality. For example, the Islamic Qur’an portrays David as a prophet whose songs praising God reverberated throughout the landscape, amplified by birdsong:

We made the mountains and the birds celebrate Our praises with David. [1] In one early Qur’an manuscript, this particular verse (aya) takes up most of the parchment page. The text is the focal point. Unlike the Book of Hours from Utrecht, there is no figural imagery in the margins. It is only the Qur’anic verse itself, written calligraphically in Kufic script with black letters and red vowel marks, that would bring the musician David to the reader’s mind. Medieval Jewish and Christian manuscripts likewise address David’s musical prowess through the beautifully written word. Many sumptuous sacred books also contain musical imagery to amplify the message. David is so often shown playing the harp in medieval manuscripts, stained glass, and sculpture that it is among the most stable and readily identifiable examples of medieval musical iconography. Two roughly contemporaneous illuminated Hebrew scriptural manuscripts—one created in what is now Germany, and the other produced in present-day France—contain depictions of King David playing the harp. In both cases, the biblical ruler is shown crowned and enthroned, his body positioned within a micro-architectural frame. The musical iconography appears in a different context in each manuscript. The half-page illumination featuring a combination of figural, zoomorphic, textual, and architectonic elements acts as the heading of the book of Ecclesiastes, whereas the full-page illumination, with a descriptive label written in Hebrew in the lower margin, is one in a series of full-page illustrations sandwiched between the book of Deuteronomy and the Haftarot. David is shown playing a contemporary harp in the examples we have seen thus far. Similarly, in a 15th-century Ethiopic Psalter, David raises his left hand to play a contemporary begena, a ten-stringed box lyre.

Occasionally, however, medieval artists showed David playing a historical or fanciful instrument, presumably as a means of historicizing the biblical figure. For example, the illuminator of the so-called Paris Psalter, a 10th-century Byzantine Psalter made in Constantinople, apparently meant to depict the historical instrument identified in the Greek translation of the Hebrew Bible (the Septuagint) as a kithara (κιθάρᾳ). A classicizing, full-page illumination shows David extending his right index finger to pluck a string of a kind of box lyre. But of all the instruments mentioned in the Bible, why was David most closely associated with the harp? One Bible story explicitly draws a connection between the two:

This passage demonstrates the powerful effects of David’s harp music: it wards off evil and soothes the king. A detailed version of the scene appears on a page of The Morgan Picture Bible. At left, David trains his gaze on the strings of his harp as he plays, the curve of his body mirroring the frame of his instrument. At right, the palliative effects of the music are evident. A winged creature, the physical manifestation of the evil spirit that had been tormenting King Saul, flees the scene. The king is left in a peaceful slumber, with his right hand gently cradling his head as he nods off. It is not only in medieval sacred art that harp music elicits physical, emotional, and supernatural responses. Painted on the inside of a ceramic bowl made in Kashan (in modern-day Iran), a hunter and a harpist ride together on the back of a racing camel. The hunter holds his bow with his right hand, and he wraps the fingers of his left hand around the string of his bow, withdrawing his arm to release an arrow. Behind him, the harpist grasps the frame of her instrument with her right hand, curling the fingers of her left hand to pluck the harp strings. The scene comes from the Book of Kings (Shahnama), the 10th-century Persian poet Firdausi’s epic poem, and thus the two figures on camelback represent the Sasanian prince Bahram Gur and the harpist Azada. The unmistakable visual parallel between Bahram Gur’s weapon and Azada’s musical instrument is made explicit in the text of another version of the story, written by the 12th-century poet Nizami. In it, the harpist is named Fitna, not Azada; Bahram Gur hunts onager rather than gazelle; and the effects of the harpist’s mellifluous music on human beings and animals alike are more fully articulated:

She played and sang with elegance,

and was quick-footed at the dance.

When to the lute she joined her song,

the birds from air to ground would throng.

Most often, at the hunt or feast,

the king her sweet songs would request.

The harp her weapon, the king’s the bow: Left: “Bahram Gur’s Skill with the Bow,” fol. 17v from a Haft Paykar (Seven Portraits) of the Khamsa (Quintet) of Nizami, Herat, ca. 1430 (The Metropolitan Museum of Art); right: detail of Fitna playing the harp

Illustrated copies of Nizami’s poem frequently juxtapose Bahram Gur’s bow and Fitna’s harp, as on a page of a magnificent 15th-century manuscript painted in Herat, in what is now Afghanistan. In this visual interpretation, Fitna is mounted on a horse, playing a harp whose blue sound box with gold detailing is as intricately embellished as the fine textiles she wears. Appearing in the context of an idealized portrayal of the Persian ruler, the harp evokes the courtly culture of a distant and heroic Sasanian past.

The courtly setting for harp music is common across temporal, geographic, linguistic, and cultural boundaries. For example, Chinese funerary figurines known as mingqi sometimes took the form of courtly musicians, as in a Tang example of a harp (konghou) player—one of a group of seated female musicians meant to go on entertaining the deceased in the afterlife. A poem written by Li He a century after the figurines were created opens by identifying the provinces where the wood (for the sound box) and silk (for the strings) were sourced to build the titular character’s 23-stringed harp. In the poem, Li Ping’s harp playing triggers emotional, physical, and cosmic responses:

Silk from Wu, paulownia from Shu,

In the white sky the frozen clouds

Ladies of the River weeping among bamboos,

As Li Ping plays his harp

In the center of the Kingdom.

Jade from Mount Kun is shattered,

Before the twelve gates of the city

The twenty-three strings can move 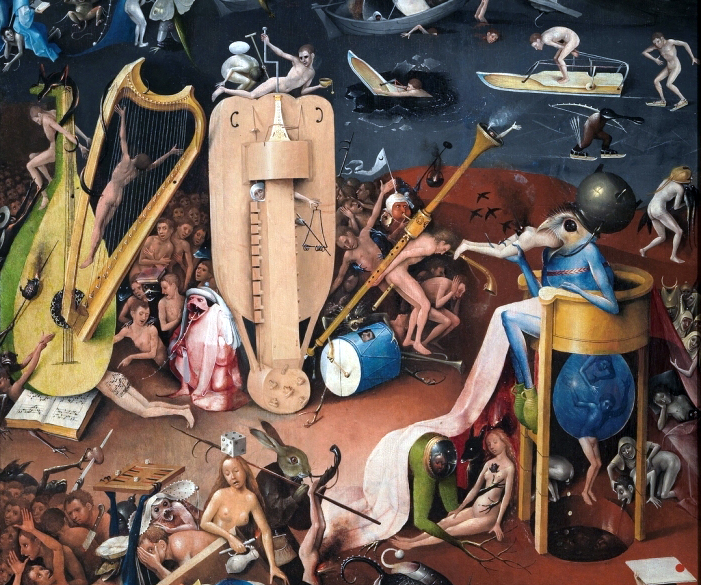 Texts and images produced throughout the medieval world reveal that, in the hands of an adept player, harp music could elicit powerful responses. It could enchant courtly listeners, ward off evil, or even reshape the material world. Seen in this light, the harp in The Garden of Earthly Delights triptych may have been an indictment of anyone who chose to wield this power to nefarious ends.

As this brief overview has shown, studying musical iconography requires an eye for detail; an appreciation for the power of music to move listeners; open-mindedness about the ways images of sound and music conveyed meaning, often in tandem with religious or poetic texts; and, in light of the fact that instruments are played with the human body, a healthy sense of humor.

The open-access database Musiconis, newly available in English, makes a vast repository of medieval musical imagery available to scholars, students, and the general public. Readers are invited to explore the objects in Musiconis at their leisure to make new connections and draw their own conclusions about the role of music in global medieval art.

Nasrin Askari, The Medieval Reception of the Shahnama as a Mirror for Princes (Leiden; Boston: Brill, 2016).

Stéphanie Weisser, “The Ethiopian Lyre bagana: an instrument for emotion,” Proceedings of the 9th International Conference on Music Perception and Cognition (2006), pp. 376-382.