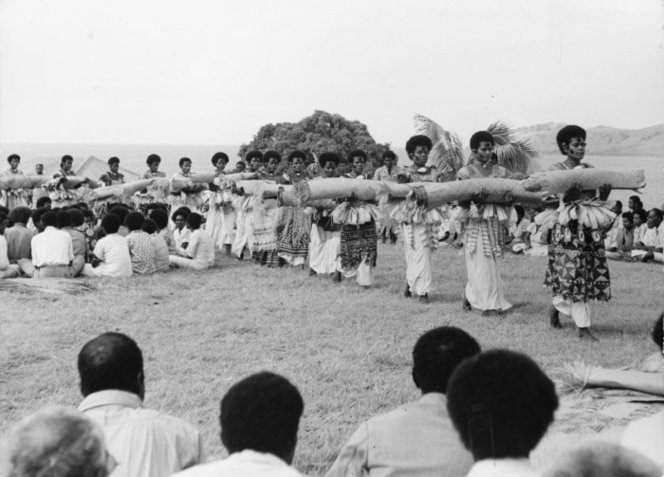 On December 17, 1953, a newly crowned Queen Elizabeth II and her husband Prince Philip, Duke of Edinburgh, arrived on the island of Fiji, then an English colony, and stayed for three days before continuing on their first tour of the Commonwealth in the Pacific Islands.
The Commonwealth of Nations, today commonly known as the Commonwealth, but formerly the British Commonwealth, is an intergovernmental organization of 53 member states that were mostly territories of the former British Empire.
While the precise date of the photograph depicted above is unknown, there is still much that can be learned both about Fijian art and culture and the Queen’s historic visit. The first thing you might notice in the photograph is the procession of Fijian women making their way through a group of seated Fijian men and women. 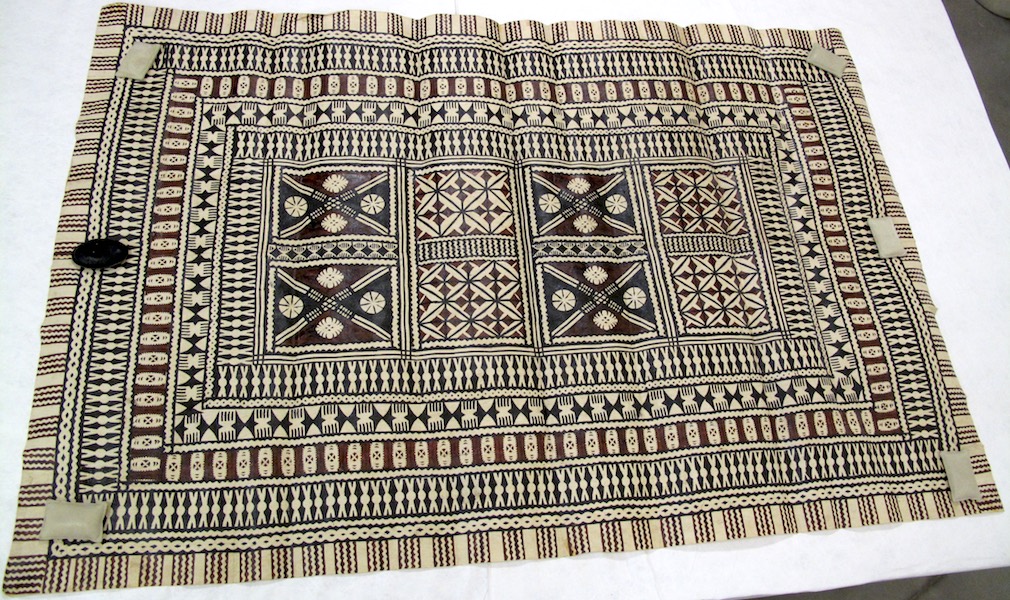 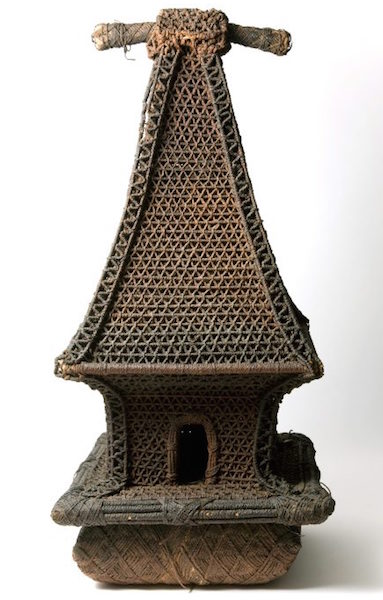 While the mats that the women in this photograph are carrying may seem too plain to present to the Queen of England, their simplicity is an indication of their importance. In Fiji, the more simple the design, the more meaningful its function. Fijian artists continue to create mats and it is a practice that is growing, with many mats beings sold at market, often to tourists. With the advent of processed pandanus, they are more widely available than masi , and used heavily in wedding and funeral rituals.

In addition to masi and mats, Fijian art also includes elaborately carvings made of wood or ivory, as well as small woven god houses called bure kalou (left), which provided a pathway for the god to descend to the priest.

Returning to the Queen’s visit in 1953, while in Fiji she visited hospitals and schools and held meetings with various Fijian politicians. She witnessed elaborate performances of traditional Fijian dances and songs and even participated in a kava ceremony, which was (and continues to be) an important aspect of Fijian culture. The kava drink is a kind of tea made from the kava root and is sipped by members of the community, in order of importance. On the occasion of the Queen’s visit, she was, as you might imagine, given the first sip of kava . In thinking about the importance of the kavaceremony, consider what might happen if everyone from a large group takes a sip from the same cup and of the same liquid. Although sipped in order of hierarchical importance, it would, in the end, put everyone in the group on the same level before beginning the event, meeting, or ceremony.

After three days on the island of Fiji, Queen Elizabeth II and Prince Philip departed for the Kingdom of Tonga where they stayed for two days before leaving for extended stays in New Zealand and Australia. On Tonga, they were greeted warmly by Queen Sälote and other members of the royal Tongan family. On the occasion of her visit to Tonga, an enormous barkcloth was commissioned in Queen Elizabeth’s honor and had her initials, “ERIII,” painted onto the rare piece of ngatu . Referred to as ngatu launimain Tongan, it is just shy of 75 feet in length and is significant not only because it commemorated Queen Elizabeth’s visit, but also because it was placed under the coffin of Queen Sälote when her body was flown back to Tonga in 1960 after an extended stay in a New Zealand hospital. The barkcloth is now in the collection of Te Papa Tongarewa / Museum of New Zealand , after being donated by the pilot who had flown Queen Sälote’s body back to Tonga, to whom the barkcloth had been given by the Tongan Royal Family.