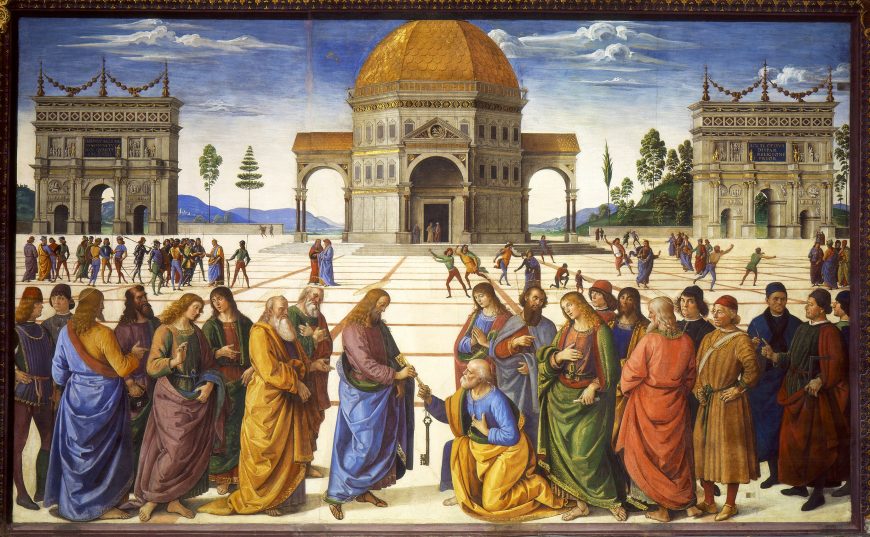 Balance is an even use of elements throughout a work of art. Symmetry is a very formal type of balance consisting of a mirroring of portions of an image. Bilateral symmetry, that is, two- sided symmetry, is the most common, in which two halves of a work of art mirror each other, as in Perugino’s painting, Christ Giving the Keys of the Kingdom to St. Peter. In this painting, the symmetry gives the painting not only a sense of balance, but also a sense of calm, stability, and formality. Notice in particular the way that the building and arches in the background are painted to make the work symmetrical.

Just as the structures, themselves, are symmetrical in Perugino’s painting, symmetry is also common in major works of architecture, where it lends buildings a tone of stability and power. Classical Greek temples like the Temple of Artemis at Corfu are rigidly symmetrical. In this diagram (the temple is now a ruin), even the sculpture on the façade — the front of a building — is nearly perfectly symmetrical. At the outer corners are a mirrored pair of fallen warriors, then two pairs (one now fragmentary) of fighting figures, then two mirrored panthers, and then, in the center, Medusa, with two of her children beside her (Pegasus and Chrysaor).

Even the fearsome Gorgon in the center is presented facing directly outward at us, so that her face can be presented in hideous symmetry, with her great, bulging eyes, grimacing mouth, plaited hair, and even the snakes that emerge from the back of her head carved in perfect symmetry. This work should serve to counter the frequently made statement that symmetry makes works beautiful. While many cultures associate symmetry with beauty, and this temple as a whole might be described as such, a grotesque figure remains grotesque even when perfectly symmetrical.

Radial symmetry is created when an image is symmetrical around a central point or axis, like a sunflower viewed head-on. Radial symmetry creates a strong sense of unity in a work of art, and is common in sacred images. In a Shingon Tantric Buddhist World Womb Mandala, all points seem to radiate outward from the central figure of the Buddha. The numerous figures around him are bodhisattvas, individuals who have chosen out of compassion to delay their entry into Nirvana in order to help others who are suffering. It is fitting that they are shown as if emanating out of the Buddha, himself, as his enlightenment and compassion are the source and model for theirs. The image also gives a sense that the universe itself is highly ordered.

However, perfect symmetry is not necessary to create a sense of balance in an image. Asymmetrical balance is created when two sides of an image do not mirror each other, but still have approximately the same visual weight, the same amount of detail or shapes or color, and so on. The Classical Greek sculpture Doryphoros (The Spearbearer) by Polykleitos provides a clear example of asymmetrical balance. The figure does not stand in a symmetrical way, but overall, seems even, calm, balanced. In this case, the figure has his weight on his right leg, so this leg is tensed. The left leg is relaxed and bent. Balancing this out, the right arm hangs loosely, but the left arm is tensed. In this way, the body — which itself is symmetrical, or would be if he were posed with his feet side by side, looking straight ahead, with his arms hanging down — is balanced. This pose is called contrapposto, and is often used to give standing human figures a sense of life and animation.

Emphasis consists of drawing attention to one or more points in a work. This can be accomplished through any of the visual elements. In the World Womb Mandala, the Buddha is emphasized through location (he is centered in the image), color (the vivid red petals around him draw the eye), line (all of the rows of figures essentially guide the eye inward to the center through implied lines, and the lines dividing the red petals direct us inward, as well), symmetry (the radial symmetry focuses us inward to the center), and so on. In essence, we cannot help but return, again and again, to the Buddha, the focus of the image and also the focus of Buddhist devotion.