A convincing illusion of space

Space is used to refer both to depth—real or represented—and also to the general surface area within a work of art. Some periods of art history show a great deal of interest in creating convincing illusions of three-dimensional space in two-dimensional media. Perhaps the most iconic (though certainly not the only) example of this is the Italian Renaissance (c. 1400-1600), when artists very deliberately worked to created convincing illusions of depth.

Look at how Raphael creates an illusion of three-dimensional form in La Donna Velata. Through careful variations in value, particularly in shading — the use of darker colors to create the illusion of shadows — Raphael convinces us that the woman in the painting is really there in three dimensions.

Light seems to strike her from her left, casting her right side in shadow. The folds of her voluminous sleeve are a particularly splendid example of the illusion of space. Even examining a small detail of it, it is hard to believe that there is no depth, at all, just thin layers of paint on flat canvas.

For sharp contrast, we can examine a detail of a page of the Lindisfarne Gospels. Both images show a person in voluminous robes, looking out at us, but here, the similarities end. Raphael’s figure is lit softly, creating highlights and shadows that create a sense of roundness and weight to her body and clothes. The figure of John the Evangelist from the Lindisfarne Gospels, on the other hand, is almost totally flat. There is virtually no shading to his body and the folds on his clothes are purely schematic patterns.

If we isolate a small detail of John’s sleeve, as we did with La Donna Velata’s, it is difficult to even recall that this series of lines and colors is intended to be seen as a three-dimensional form, at all. 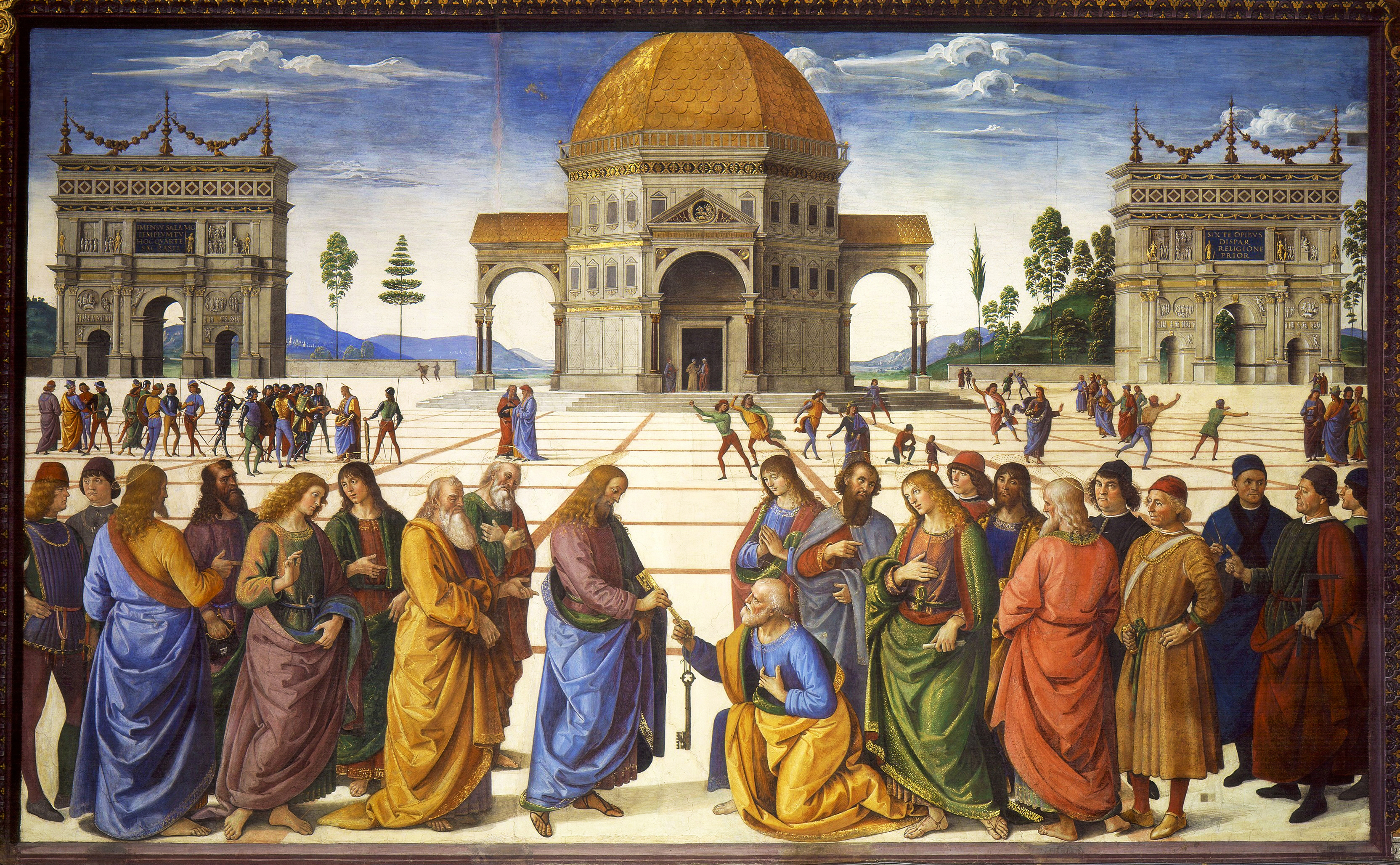 Wolf Vostell, No: Life as a Picture—A Picture as Life series, photograph, 1963

There are various methods used by artists to create the illusion that their figures exist in three-dimensional space. Among the more effective are linear and atmospheric perspective. Another work from the Italian Renaissance will serve to demonstrate both. Pietro Perugino’s Christ Handing the Keys to St. Peter, uses both linear and atmospheric perspective to create a very convincing illusion of depth.

Linear perspective is based on the optical illusion that parallel lines seem to converge as they recede into the distance. Railroad tracks are the classic example, as in, Wolf Vostell’s photograph from his No: Life as a Picture—A Picture as Life series from 1963. If we overlay the lines used on Perugino’s painting, we can see how he used this effect. The lines are called orthogonal lines or orthogonals and they meet on the horizon line, at the vanishing point. Note that as all the orthogonals converge, the forms also get smaller. 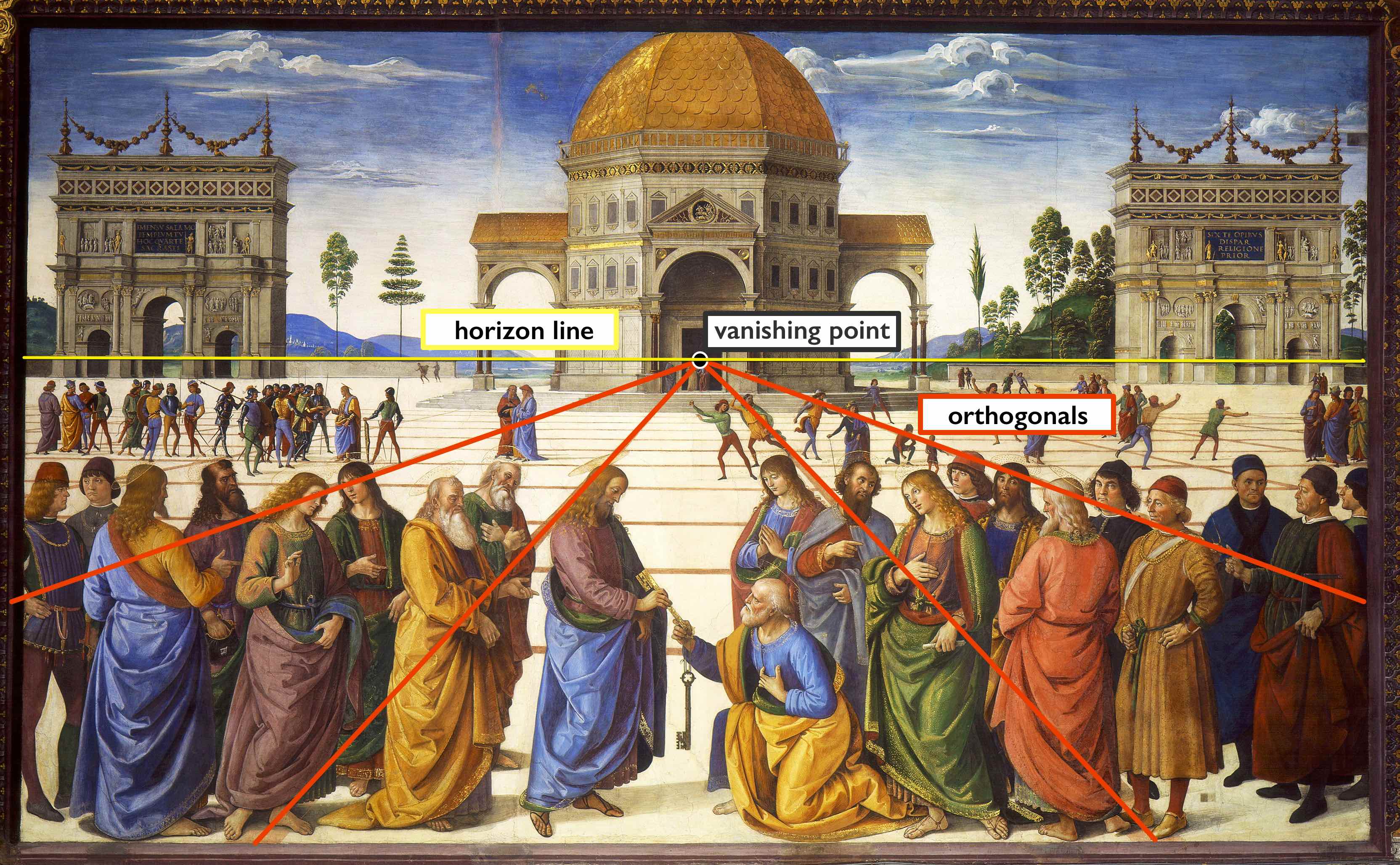 The tool of one-point linear perspective is very simple, and artists can use it to create a convincing illusion of depth with only a few pencil strokes and without the careful measuring and use of a straightedge, as in Tobias Verhaecht’s sketch of a Roman ruin. Two- and three-point linear perspective are slightly more complicated, but operate on the same general principles and produce similar results.

It is important to note, though, that the use of various techniques to create a convincing illusion of depth does not make Raphael or Perugino “better” artists than the anonymous medieval monk who painted the page of the Lindisfarne Gospels, nor does it make their works any “better” or more sophisticated. The illusion of depth is one of the many tools in the artist’s toolbox, and it is serves some purposes very well, but it is not always the most powerful or effective way to convey an idea and, indeed, can sometimes be in direct conflict with the intentions of an artist.

Drawing techniques from the V&A