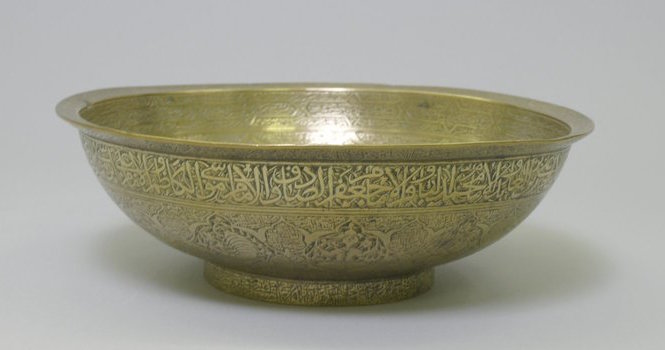 Iranian metal bowls have a variety of shapes, decoration themes, and uses during the Safavid period (1501-1736). The Iranian Divination Bowl with Inscriptions and Zodiac Signs today in the Brooklyn Museum is decorated with unusual themes—a blend of religious, superstitious, and Persian historical motifs. The practice of fāl (divination, or seeking knowledge of the future or the unknown by supernatural means) during the Safavid period was facilitated by the use of divine text but it was also influenced by ancient Greek astrology.

The exterior of the divination bowl is covered with both inscriptions and signs of the zodiac. Some of the zodiac signs are represented with traditional figures, but others are more unusual. 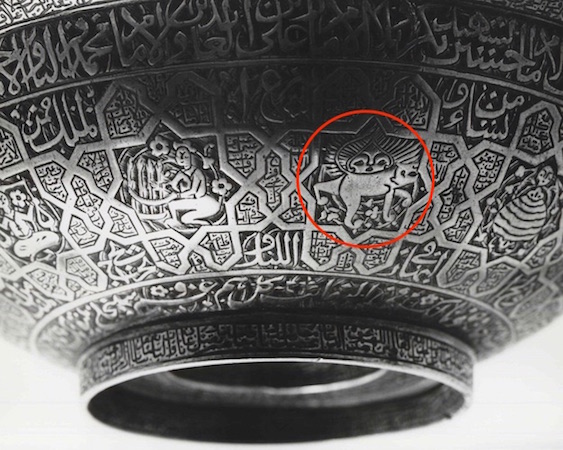 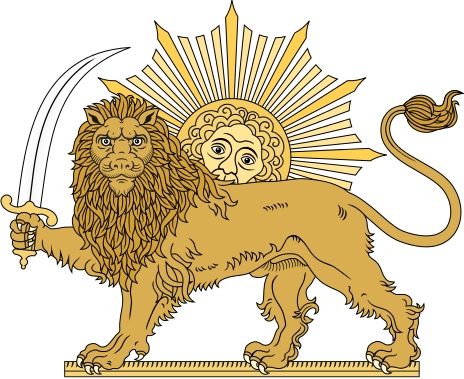 Leo for example is represented by a lion figure as one might expect, but here with the sun behind it, illustrated as a semi-oval human face in the background. This figure resembles the historical Persian symbol of Širo Xoršid, “the Lion and the Sun,” which eventually became a national emblem and represents, among other things, the ancient history of Persia.

The Lion and the Sun symbol was represented on Iranian metalwork in earlier centuries. Scholars suggest that the reason for using this symbol on some Iranian metalwork is to illustrate the triumph of the light over darkness. One can also see the Širo Xoršid as a combination of this traditional Persian symbol and contemporary Shiite religious inclinations. In other words, the lion could be interpreted in relation to the Shiite tradition of representing Imam ‘Ali as a lion since he was historically called Assaduallah (The Lion of God) (Imam ‘Ali is believed by Shia to be Muhammad’s successor in the Caliphate).

Scholars have proposed that zodiac signs were used on Iranian metalwork as early as the second half of the twelfth century and became popular in Islamic art in the thirteenth century. However, some of the images developed by the Greek astronomers were transformed in the Islamic world, bringing them closer to Iranian Shiite culture and theology. For example, there is an association between the twelve zodiac figures and the twelve Shiite Imams. Shiite thought and culture also associates the number twelve with holiness—as there are twelve months of the year and twelve zodiac signs, there are twelve Imams. 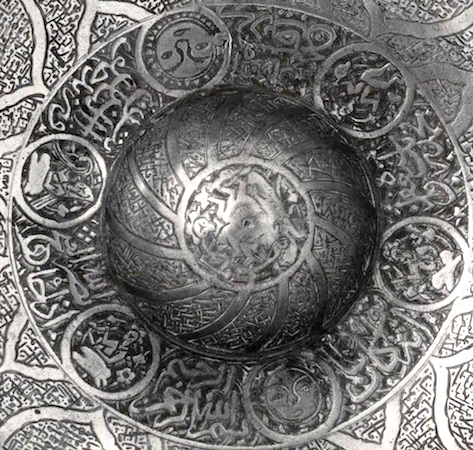 Around the convex hemispherical boss in the bottom of the interior (above), there are three verses from the Qur’an. These are divided with circular panels that also include zodiac signs. These verses are from Surat An-NaS (Chapter 110) of the Qura’n, verses one, two, and three. These Qur’an verses are usually interpreted as God talking to Muhammad, promising him victory over his enemies, the people of Quraish. God is also promising Muhammad that he will conquer Mecca and the city’s disbelieving inhabitants will convert to Islam. The content and the revelatory occasion of these verses is a prophecy of victory and glory. Reciting these verses in a prayer or divination practice could be a channel to seeking victory, glory, and a happy life. We might assume that these are the reasons why these verses are inscribed on the bowl (if it was in fact used for divination).

The other two verses from the Qur’an inscribed on the bowl are inside the bottom ring on the exterior. These are verses 87 and 88 from Surat Al-Ànbyâ (Chapter 21). However, both of these verses are quoted only partially. The verses are often interpreted as the miraculous story of a believer, Yūnus (Jonah),  who was saved by God for his true faith. These verses were likely inscribed on the bowl because it was believed that they have supernatural power. It is still widely believed among Muslims (both Sunnis and Shiites), that reciting certain verses or making some du‘aā (prayer) will help guide you to the right path and help you seek God’s support. 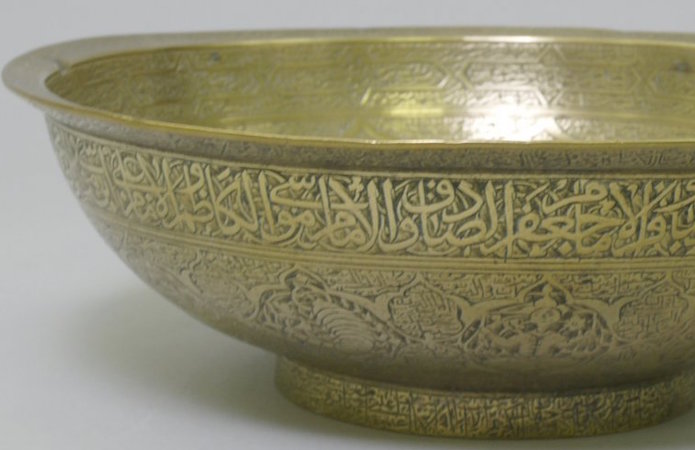 Shiite divine text is also present on the bowl. For instance, the most visible inscription, on the neck of the bowl going all around under the rim, is a lavishly done Arabic inscription of the Shiite prayer for Muhammad and the twelve Shiite Imams. The prayer starts with Muhammad, then Imam ‘Ali and lists all other Imams accordingly. 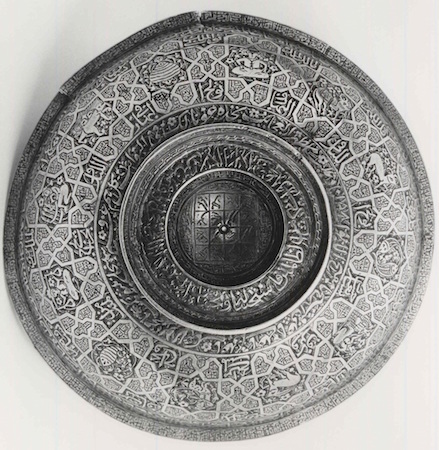 Around the bottom ring, there is another Shiite prayer calling the Imam ‘Ali for help. The inscription reads, “Call upon ‘Ali who causes wonders. All anguish, all sorrow will disappear. Through your state of friendship with God. Oh ‘Ali, Oh ‘Ali, Oh ‘Ali.” This Shiite prayer is inscribed on other Iranian bowls as well. According to the Shiite tradition, such prayers are recited when a person needs help and guidance in achieving a goal, healing an illness or seeking treatment. Additionally, for Shiite Muslims, the twelve Imams have extraordinary abilities so reciting their names in prayers is a blessing.

Scholars have observed that in the Safavid period, when this bowl was made, the practice of fāl (divination) was on the rise. It is believed that a number of verses and suras (chapters) in the Quran were (and still are) believed to hold special khawass (qualities) such as being efficacious in curing illness or in protecting oneself against an enemy. Therefore, the Qur’anic verses that are inscribed on the vessel could be considered some of these Qur’anic text that have special khawass. But as we have seen, associating miraculous abilities and holiness with a divine text was not limited to passages from the Qur’an but also included the blessing of the twelve Shiite Imam’s names.

The escalation of divination practice during the Safavid Empire period helps us understand the mix of these different motifs on a single bowl.

Divination (from the Encyclopaedia Iranica)

Following the Stars: Images of the Zodiac in Islamic Art

Howayda Al-Harithy, “The Ewer of Ibn Jaldak (623/1226) at the Metropolitan Museum of Art: The Inquiry into the Origin of the Mawsili School of Metalwork Revisited,” Bulletin of the School of Oriental and African Studies (University of London) 64 (2001), pp. 355-368.

—– Metalwork of the Islamic World: The Aron Collection (London, 1986).

Stefano Carboni, Following the Stars: Images of the Zodiac in Islamic Art (New York: the Metropolitan Museum of Art, 1997).