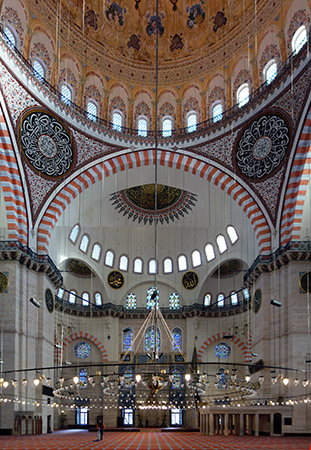 Imagine yourself in the vast prayer hall of an Ottoman mosque during the height of its empire in the 16th century. As you bask in the splendor of the sacred space, you notice that suspended above your head are hundreds of glowing oil lamps, and attached to these lamps are lavishly decorated spherical ornaments. What do you make of these ornaments? Do they have a particular meaning or function? What can be discerned from their shape and painted decorations?

Photographs can be deceiving, a warning you should heed especially when looking at images of the Spherical Hanging Ornament in the Brooklyn Museum. Can you guess how big it is? Or how much it weighs, or what kind of material it is made of? If you stood in front of the object you would realize that it is as large as a basketball, and if you could lift it up, it would weigh about the same. Composed of fritware (a clay-based medium made of quartz), this sphere is extremely fragile, and hence quite precious, since only four others like it exist in the world today. 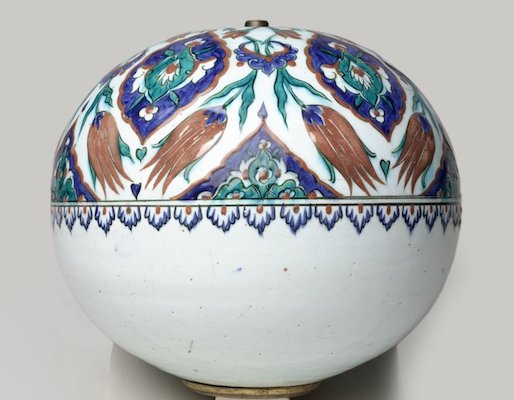 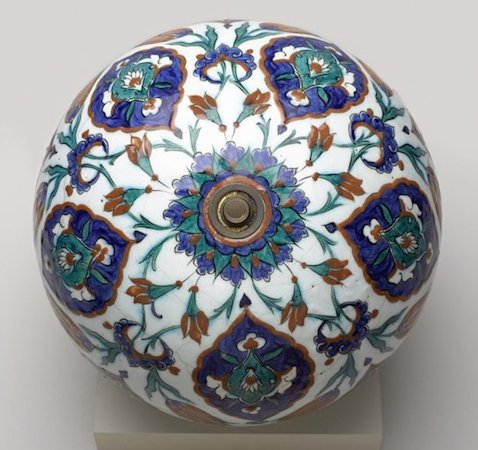 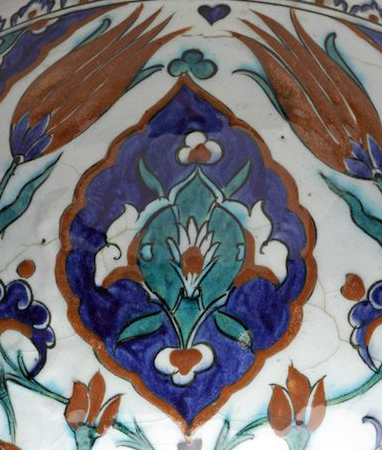 The sphere is actually displayed upside-down on the museum pedestal, stabilized by a support in an opening at its top, so that its decorated bottom-half faces upward for easy viewing. The design consists of a whimsical garden scene with five pairs of lively red tulips. The tulips alternate with elaborate palmettes comprised of symmetrical floral motifs, including green lily pads that sprout white lotus flowers. The stems of the tulips originate from the base of the lamp, the center of which holds a metal fixture that fills a small hole. The sphere’s red pigment is slightly raised, lending a subtle texture to the ornament, which is also coated in a transparent glaze, giving it an all-over shine.

A brief history of Ottoman ceramics 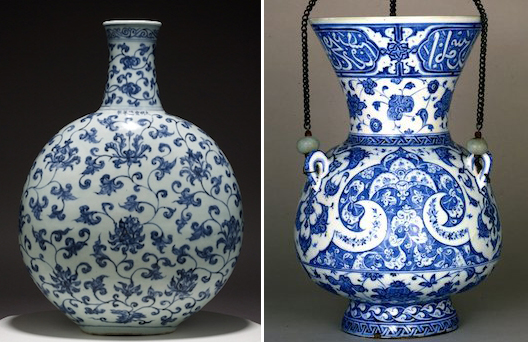 Twelfth-century Persian ceramicists attempted to imitate porcelain, but since they only had access to quartz, they developed fritware instead, which is hard like porcelain, but lacks its glassy quality. By the sixteenth century, most Ottoman pottery centers, such as Iznik, used fritware. Early Iznik frtiware resembles blue and white Chinese porcelain, especially with its designs of intertwining vines and hatayi blossoms. The term hatayi in Turkish translates to Cathay, which references the Chinese origins of the flowers’ style. 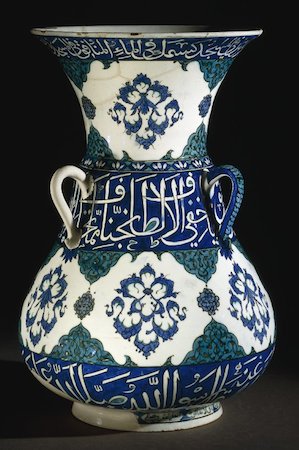 Mosque Lamp made for the renovation of the Dome of the Rock, 1549, polychrome glazed pottery, Iznik, Turkey, 38 cm high © The Trustees of the British Museum

As the Ottoman Empire expanded, the demand for ceramics increased, prompting the development of a more efficient under-glazing technique. Similar to porcelain decoration, underglazing fritware involves painting designs onto a post-fired white-slipped vessel, upon which a transparent glaze made out of a lead flux is then applied. When fired, the vessel acquires a glossy complexion. This technique flourished during the reign of Suleiman the Magnificent, who undertook a series of large building projects.

By 1550, Ottoman ceramicists developed a turquoise pigment and a chrome-based black color, that was used to draw thin lines, as can be seen in a mosque lamp made for the renovation of the Dome of the Rock (left). This lamp has been linked to a spherical hanging ornament in the Benaki Museum, indicating that the Brooklyn Museum’s Spherical Hanging Ornament likely hung in a sacred space too.

Within the next decade, a thick, red, iron-rich glaze and an emerald green color made from copper were invented. Such advances allowed artists to create extravagant decorations that were more eye-catching, like those on the Brooklyn sphere. 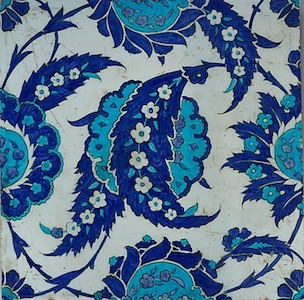 Around 1540 Ottoman artists broke away from Chinese models, led by court artist Shah Qulu, who created a turbulent world of agitated, serrated, featherlike leaves known as the Saz style (left). His most talented pupil, Kara Memi, later developed a more naturalistic representation of flora, creating virtual spring gardens known as the Quatre fluers style, as four types of flowers (tulips, carnations, hyacinths, roses) generally, although not always, appear in these designs. Quatre fluers became the hallmark of Ottoman art, and it is this style that is seen in the Spherical Hanging Ornament.

Unfortunately, by 1600, ceramic production suffered from a generalized decline in the Ottoman Empire. Thus, it seems likely that the Spherical Hanging Ornament was produced between 1570 and 1600.

The purpose of a spherical hanging ornament

Aside from giving aesthetic pleasure, the function of the Spherical Hanging Ornament is ambiguous. Smaller ornamental spheres are known to have hung with ceramic mosque lamps. A ceramic mosque lamp is technically a misnomer, since its opaque body renders it useless as a light source, and so it would not have functioned as a lamp. It seems more likely then that ceramic spheres and lamps had primarily symbolic purposes. 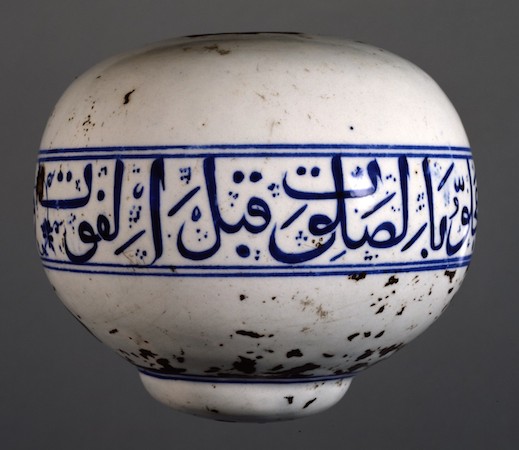 Glass mosque lamps are often understood to represent God’s divine light, as the Koran makes such an analogy in its “Light Verse,” which is often inscribed on mosque lamps. The hadith (inscription) on the Walter’s Museum sphere (above) also quotes the prophet Muhammad, “The world is only one hour, so hasten to prayer before dying and hasten to repent before death,” implying that the sphere represents the orb of heaven, which might have been the purpose of the Brooklyn sphere as well. Within a religious setting, its sumptuous floral decorations would have alluded to the gardens of paradise. 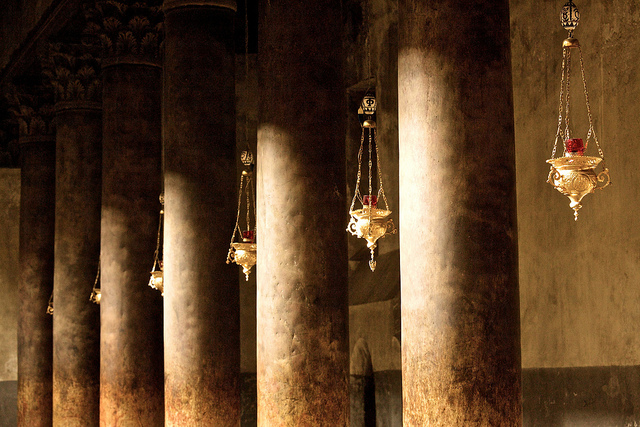 Such imagery could also evoke fertility, and in Middle Eastern Christian and Muslim sanctuaries, similar, ableit oval and smaller, hanging ornaments are placed alongside lamps today. Some of these smaller ornaments, which are suspended on the same chains as the lamps, function to keep the chains organized, as without them, the chains could become entangled when servicing the lamps. 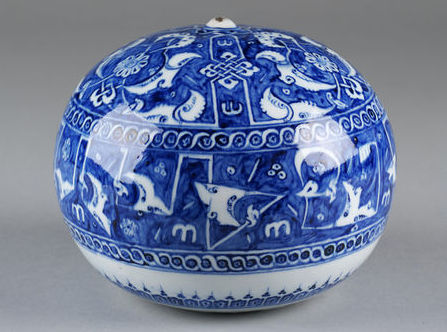 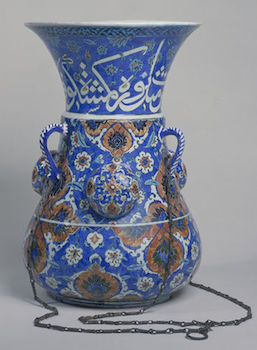 The four other large Ottoman spherical hanging ornaments, which can be found in the collections of the Victoria and Albert Museum, The British Museum and Benaki Museum, are similar to the Brooklyn Museum ornament in that they bear resemblances to the designs of some ceramic mosque lamps. However, it is not known whether such large ornaments were suspended directly above the lamps or alongside them. On the neck of a late 16th century Iznik mosque lamp (left) are four miniature versions of spherical ornaments, which further suggests a relationship between the spheres and mosque lamps. Present-day photographs of the Sulimaniye mosque (above) also show large, red ornaments hanging from the center of the mosque’s chandeliers, so perhaps the Brooklyn ornament was intended to do the same.