Images of all kinds

One of the widespread myths about Islamic art is that images of living creatures are banned. It is true that the Qur’an forbids the worship of idols, and “idol” was usually understood in antiquity and the Middle Ages in Europe and the Middle East to mean a painting or statue. For that reason, images of people and animals were almost never depicted in mosques. However, in other settings, there were plenty of images of all kinds. In fact, more figural painting in the Levant has survived from the early Islamic period, roughly the seventh to ninth centuries, than from the centuries immediately before Islam.

In the pre-Islamic period, there were religious paintings inside the Kaaba. Some were of Arabian gods, one showed the Virgin Mary and Christ Child, and others showed trees. The Prophet Muhammad was said to have removed the images of the local gods, but kept the Christian one, since Christ and Mary are also venerated by Muslims. However, all these paintings have since been lost. In fact most paintings from this period are lost, since the medium is vulnerable to deterioration over time—the ones which have survived have done so against the odds.

This essay discusses figurative and non-figurative paintings that have survived in four palaces between the 7th and 8th centuries:

In addition, the essay explores how pigment was used in the 8th–10th centuries to decorate three-dimensional forms in stucco, stone, and wood, and smaller paintings in manuscripts and on ceramic plates.

The best-preserved early Islamic paintings are from the palaces of the Umayyad caliphs and princes. These mostly date to the first half of the 8th century. Starting with the most impressive, the bathhouse of Qusayr ʿAmra in Jordan was built for the prince al-Walid ibn Yazid. It has an audience hall and a suite of three bathrooms, and the walls of every room are painted with an amazing assortment of scenes. 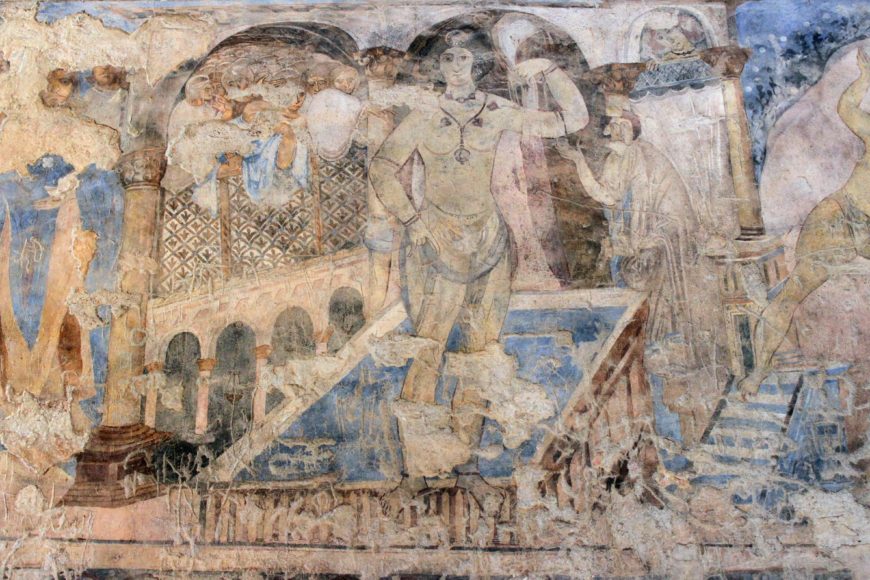 Some seem to tell stories. In the middle of one wall of the audience hall, a semi-naked woman stands at the edge of a bath. She is watched by a group of men on a balcony, some of whom point at her, and one dressed in a bright blue robe (on the far left) leans forward over the railing to get a better view. A figure stands behind the bather, also gesturing at her, and another woman’s head can just be seen above, peering down from a little window. No one is sure what the scene means, but it is full of drama. Perhaps some of the figures were portraits of real people—maybe the man in blue is al-Walid himself—or perhaps they represented more abstract concepts or qualities, in the same way that, for example, the goddess Venus could stand for beauty and love in Roman art. On other walls at Qusayr ʿAmra are portraits of the patron, and images of kings, wrestlers, hunters, fishermen, dancers, musicians, and mythological characters. There is also a painted star-chart in the dome of the sauna, with the symbols for the Greco-Roman constellations. There were probably equally varied wall paintings at the Palestinian palace and bathhouse of Khirbat al-Mafjar, based on the fragments remaining, which show pieces of people, animals, and buildings (this palace is discussed more below). The palace of Qasr al-Hayr al-Gharbi (also called Qasr al-Hayr West) was built for the caliph Hisham, and among its decorations were two huge frescos on floors. One of the panels shows vine scrolls, centaurs, and a woman carrying fruits in a cloth: she is probably the classical figure Ge or Gaia, a personification of the Earth. The floor was a very unusual place for painting. The composition looks like a Byzantine mosaic, and it is possible that paint was substituted for as an inexpensive or quicker alternative. The second floor painting at Qasr al-Hayr al-Gharbi shows musicians and a hunter on horseback, and is more Sasanian in its style and content, for example the hunter’s flowing scarf headdress was adopted from elite Sasanian fashion.

Palaces like these were usually outside cities, but they were often near main roads and so were relatively easy for their patrons to visit. They would have been used as temporary retreats—holiday homes—and probably also as sites of display, places for the Umayyad aristocrats to entertain and impress visitors. Grand paintings would have helped to create the desired atmosphere of luxury and sophistication. At another Umayyad site, Qasr al-Hallabat in Jordan, the wall paintings include plant scrolls framing mythical simurghs or senmurvs—beasts with lions’ paws and peacocks’ wings. Medallions inhabited by little animals and people were also found at the ninth-century Abbasid palatial complex of Samarra, along with some larger compositions such as a pair of dancing women pouring wine into bowls. These later examples show that the art of figural painting continued to flourish in secular contexts after the Umayyad dynasty had ended.

Moving to non-figural paintings, these could be used to decorate other parts of the same palaces. For example, designs along the dados of walls at Qasr al-Hayr al-Gharbi imitated the patterns of other materials like marble and textiles. Painted imitations of marble have also been found at early Islamic palaces in Balis and Rusafa in Syria, as well as at Qusayr ʿAmra and Khirbat al-Mafjar alongside the figural designs. In one example from Khirbat al-Mafjar, diagonal striped lines represent the veins in a slab of marble, while the diamond and circle in the center resemble inlaid pieces of expensive multi-colored stones. Very similar designs are found at non-Islamic sites in western Europe around the same time, particularly in the Lombard and Carolingian regions, as well as in much earlier Roman buildings.

Painting in the early Islamic period—and probably throughout the Middle Ages—didn’t just mean flat designs on walls or floors. Pigment was also used to decorate three-dimensional forms in stucco, stone, and wood. There are not many written descriptions of painting from this period, but those that exist often describe the colors as being applied to objects or parts of buildings, and so it is possible that this was the most common use of the medium. Painted stucco statues of soldiers and women holding flowers were found at Khirbat al-Mafjar, and it is probable that stone statues elsewhere were painted. 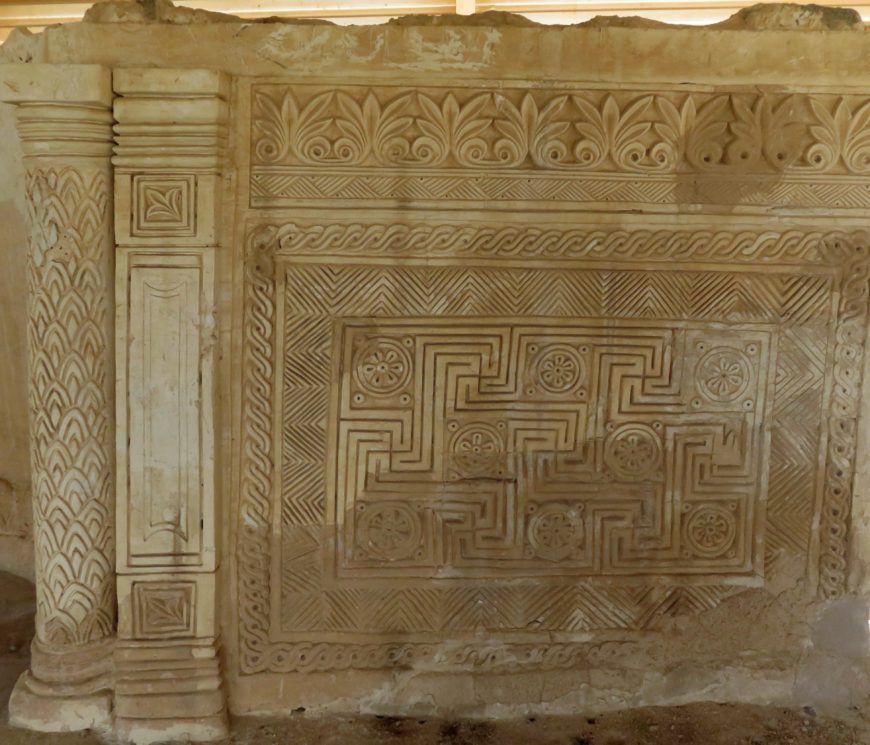 Pigment does not survive well on moulded stucco, for example the qibla wall of the mosque of al-Fudayn appears today as plain plaster, but it is likely that most panels like this were originally brightly colored. One clue is that the motifs chosen for the stucco-work were often ones associated with color, like the stylized flowers known as rosettes on the qibla wall shown above. The paintings described so far were all large-scale, integral parts of rich buildings. Smaller objects could also be painted, from valuable items such as manuscripts to more mundane ones like ceramic plates. Early manuscripts of the Qur’an were sometimes illuminated with architectural and floral motifs, although more often with geometric ornament.

Developments in ceramic glazing technology took place in the 9th century, and from then on ceramics were painted with a much wider range of motifs. These were often simple versions of the designs chosen for palace walls: birds, animals and mythical creatures, kings, hunters, musicians and dancers, as well as non-figural patterns and script. The metallic yellow-brown was probably intended to imitate gold, such as in a bowl from the 10th century in The Metropolitan Museum of Art. Western European ceramics of the same period are nowhere near as highly decorated, as the potters lacked the knowledge and materials for the glazes.

Other types of objects were almost certainly painted too, but have not survived so well over the centuries.

A culture of paint

Painted ornament in both two and three dimensions was an important part of elite visual culture in the Umayyad caliphate, while during the Abbasid period, innovations in technology brought intricately painted objects into everyday life. Early Islamic paintings were often vivid and imaginative; some reworked classical Greco-Roman or Sasanian motifs, and others were new. Far from being a period of iconoclasm or avoidance of images, this was a time of renewed engagement with the art of paint.

Khirbat al-Mafjar (from The Metropolitan Museum of Art)