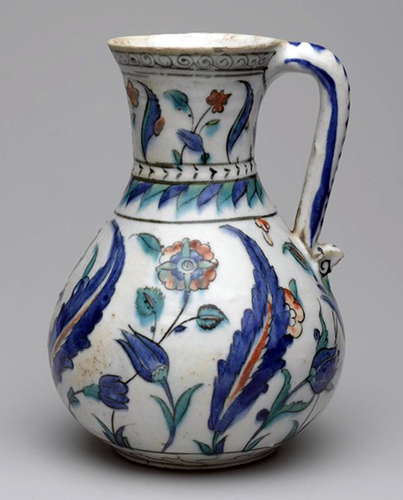 Iznik ceramics give us a wonderful opportunity to glimpse into both the thriving Iznik ceramic industry and a 16th century Ottoman home. The ewer shown on the left is a type of jug that is shaped like a vase. It was a common utensil used daily for carrying water from the kitchen to the dining area, and for serving family and guests. This particular ewer was made in Iznik, the Ottoman center of ceramic production.

The town of Iznik was an important production center during the fifteenth, sixteenth and part of the seventeenth centuries that manufactured ceramics for both the court in the capital, Istanbul, and for the open market. The ewer was only one form of ceramic kitchenware that was produced in Iznik workshops. Other products included dishes, bowls, tankards, and bottles. 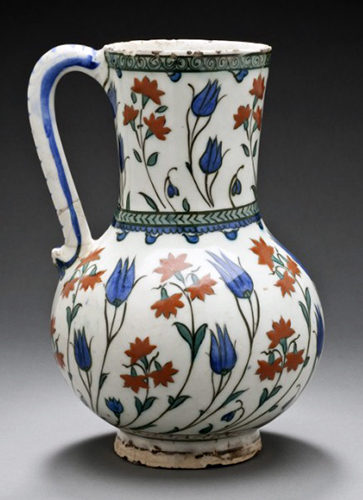 Due to the absence of petuntse (a variety of feldspar rock), used in Chinese porcelain, true porcelain did not come to the Middle East until the modern era. Nevertheless, twelfth-century Islamic potters in Persia were able to produce a  strong white clay that in many respects resembled Chinese porcelain. This mixture of potter’s clay, ground quartz, and glassy frit, is called fritware. This porcelain substitute, together with the under-glaze painting technique used to decorate the ceramics, was used for centuries. It is not only seen in surviving kitchenware, but also in beautiful tiles covering the interior and exterior of important Ottoman buildings.

Iznik ceramic production initially used blue-and-white decoration. However, by the second half of the sixteenth century, Iznik pottery saw the gradual addition of new colors as pigments were developed. The Brooklyn ewer is painted in black, cobalt blue, green, and red under a transparent glaze. 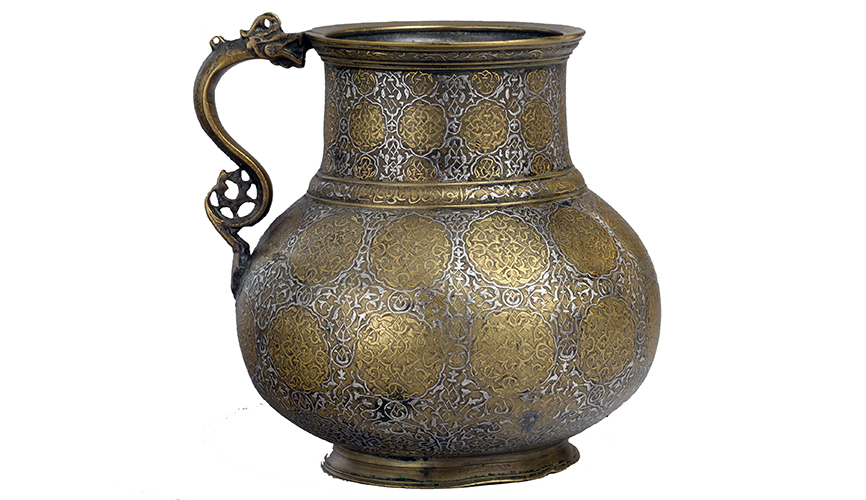 The ewer’s round body shape with the narrow neck and the round handle is similar to the shape of metal jugs from the Islamic world of the fifteenth and sixteenth centuries. It was also influenced by blue-and-white ceramic pot-bellied jugs produced by Chinese potters of the Ming period (1368-1644). This form became especially popular in Central and Western Asia after the Mongol conquests and under the Timurid and Safavid dynasties. 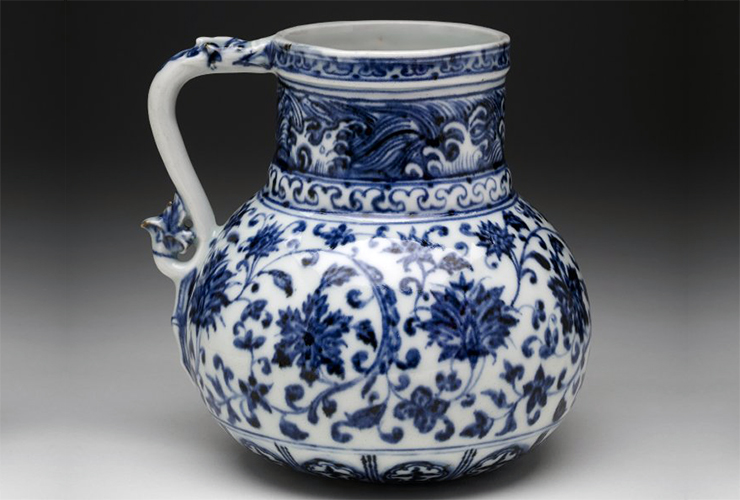 Metalsmiths of this period often used bands to separate areas of their vessels—the base from the body and the body from the neck. Similarly, the potter that created the ewer above employed decorative patterns to give an effect of visual separation similar to the metal bands. The simplicity of these bands, as opposed to the more complex motifs found on the metal jug, is repeated in the decorative floral imagery found on the larger surfaces—the body and neck of the ceramic ewer. The patterns that form the “bands” are common in Iznik ewers from the second half of the sixteenth century (see image above, “Similar Iznik Ewer”).
The base is decorated with black hatched lines and at the neck there are leaves alternating blue and green. An additional band of black lines separate this surface from the neck of the vessel. A black spiral called “the snail” is repeated just below the mouth of the ewer. 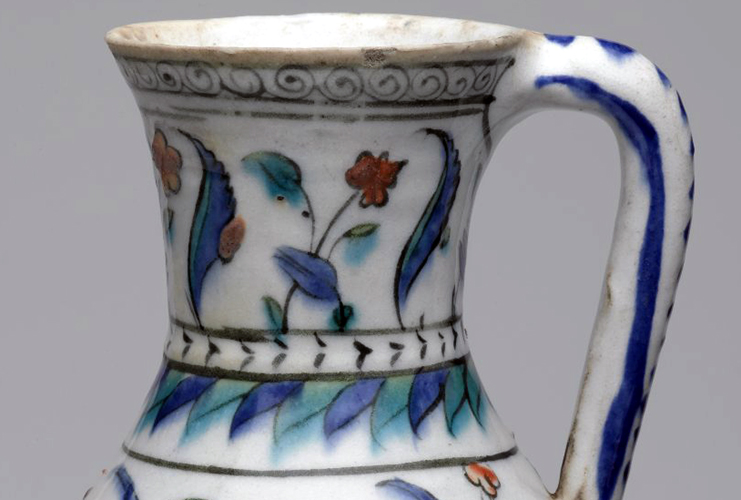 The body is decorated in the saz style. This style was introduced to the Ottoman court by the sixteenth century Iranian painter, Shah Qulu, who moved to Istanbul at the beginning of the century. He and his followers created the saz style, a name that derives both from the Ottoman term for the marsh reed out of which the artists’ pens were crafted and from the enchanted forest of Turkic mythology. Another name for this style, hatayi, recognizes the Chinese origins of many of its elements, such as the lotus flower and the Chinese-style dragon. The saz style was adapted to many different media for the Ottoman court. Tiles with saz style drawings, for example, were used for the restorations to Istanbul’s Topkapi Palace after 1574 (see “Tile” image). Note how the long, serrated, saz style leaf on this tile resembles the leaf on the ewer in both shape and color—blue with a narrow red line in the center. 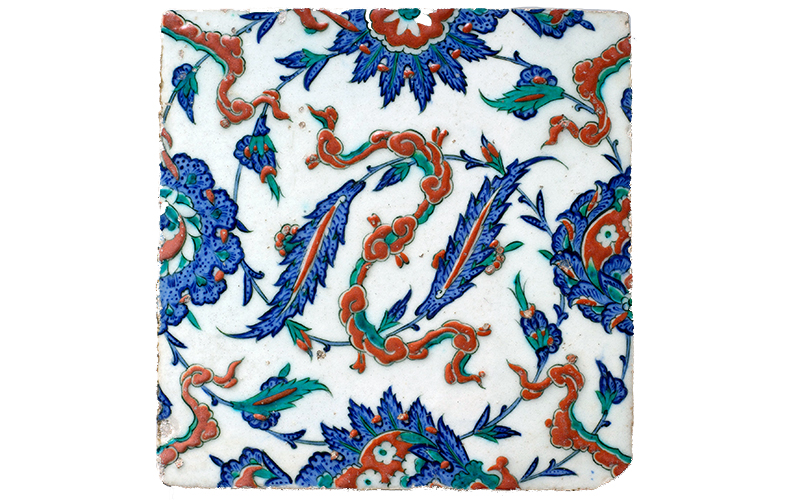 One of Shah Qulu’s pupils in the nakkashane (royal atelier), the Anatolian Kara Memi, developed another popular style seen on the ewer. Shortly after the middle of the sixteenth century, Kara Memi introduced a set of motifs that is a virtual garden of stylized flowers, but most emblematic are the long, elegant tulips. These flowers constitute one of the most distinctive and familiar aspects of Ottoman style art and we can identify them as well as leaves and additional garden flowers on the body and neck of the ewer.

Adopting the aesthetics of the aristocracy

The fading, bleeding colors on the vessel indicate that it was not made for the royal court though it was produced from fine materials and its drawing imitates the court style. It was most likely made for the merchant class, subjects of the empire who were not aristocracy but were not slaves. The owners of the ewer adopted the aesthetics of the aristocracy and purchased their own ceramics in a style similar to that found in the royal court.

The Ottomans themselves accepted the influence of various cultures in to their art. Their artistic strength comes from adaptation of influences such as Chinese and Iranian, together with local innovations to create what was eventually identified as an Ottoman style.

The Art of the Ottomans before 1600, Heilbrunn Timeline of Art History, The Metropolitan Museum of Art