An architectural masterpiece in brick

Since antiquity, Bukhara, one of the famed cities on the Silk Roads of Asia, now in Uzbekistan, has been a nexus of trade. The city rose to prominence under the Samanids, a Persian dynasty, ruling over northeastern Iran and western Central Asia from 819 to 1005 in service of the distant ‘Abbasid Caliph, the nominal head of the Islamic world, in Baghdad, the Samanids were effectively independent. Under Ismail (who ruled from 892–907), the domains of the Samanids expanded, and Bukhara became the Samanid capital. The city became a cultural and artistic center to rival Baghdad, and Persian—rather than Arabic—language and culture were predominately promoted here. The trade along the Silk Roads generated tremendous wealth for trading cities like Bukhara. This new found wealth was often used to support mosques, palatial residences, and tombs. One of the architectural masterpieces erected in Bukhara during the Samanid dynasty is the building called the Samanid Mausoleum. Situated to the west of medieval Bukhara, this tomb was once located in the heart of a cemetery, but today stands alone in a park. The greenery, lush by the standards of Central Asia, provides a colorful contrast to the cream-colored Mausoleum. Built for one of the members of the Samanid dynasty in the late ninth or early tenth century, the tomb is one of the earliest surviving examples of funerary architecture in the Islamic world. Famous for its complex brickwork (and because it survives), the tomb gives us a sense of the remarkable architecture of Central Asia in the early tenth century, the development of monumental funeral architecture, and the region’s pre-Islamic architectural traditions. Impressive tombs came to be an important element of Islamic architecture in Central Asia. Samarkand, the capital city of conqueror Timur (often known as Tamerlane) and his successors, the Timurids, is home to a large necropolis, called Shah-i-Zinda, where large numbers of his family members were buried in the last quarter of the fourteenth century and the first quarter of the fifteenth century. The earliest burials in the cemetery dated to the eleventh century. The mausoleum is composed of a single cube-shaped room (10.8 x 10.7 x 10.8 m), surmounted by a dome (with a diameter of 9.25 m) with brick columns with little cupolasat each corner. The tomb was originally accessed from any of the four entrances, but today only one is used. It was modeled on a chahar taq, the Zoroastrian fire temple of ancient Iran, such as the Niasar fire temple from the 3rd century. Fire temples, a place of worship in the Zoroastrian religion, were composed of a domed cube with arched openings on each of its four sides. There were other pre-Islamic architectural models for tombs in central Asia, so the choice of a tomb modeled on a Persian architectural form reflects the Samanid preference for Persian artistic traditions. The modern country of Iran developed over the heartlands of ancient Persia empire and scholars often use these two terms interchangeable when discussing the art, architecture and history of the region. Although its walls are slightly battered due to age and the elements, the tomb’s intricate brickwork is a tour de force; every surface is articulated with some detail. Circles, diamonds, squares, rectangles, and arches compete for the viewer’s attention. The building’s exterior has a checkerboard pattern and appears almost as if it was woven of the cream-colored bricks (each of which measures 230 x 230 x 30 mm). The building’s rich textured appearance means that light and shadows engage in a delightful game that captures the viewer’s attention. The building’s brickwork is evidence that a new artistic height had been achieved. Each portal into the building is surmounted by two arches of bricks and a spandrel (the area between the arch and decorative edge of circles). Above each portal is a triangle with abstract vegetal motifs, flanked by two squares which enclosed a series of nested diamonds, squares, and a circle. The triangular motif has been interpreted as a simplified version of the Sasanian crown, suggesting another tie to artistic traditions of pre-Islamic Persia. Scholars have also argued that other details, such as the use of a pearl motif, may draw on designs used by the Parthians. The inner walls of the cube were surmounted by an arcade (a row of columns) composed of bricks. The arcade solves the problematic and the visually awkward transition from a rectilinear cube to dome, turning a potential decorative weakness into one of the building’s visual strengths. The colonnette of arcade was one of the few parts of the building that was faced with stucco revetment; some of which remains visible today. The arcade may recall the arcades that were depicted on Sogdian ossuaries (a container for the bones of the deceased). The Sogdians were an Iranian people who controlled this part of central Asia before the arrival of the Arab armies, who brought Islam with them, in the late seventh century. The interior brick work was just as stunning as the exterior; the bricks were artfully arranged in patterns of herringbones, circles, and cubes, among others. The interior is also noteworthy for its elegant solution of the problem of how to set a dome over a square chamber—a challenge that has faced architects since the invention of the dome. In each corner, a squinch (an architectural form found in pre-Islamic Sasanian architecture), is used. Composed of three arches that come down from the curve of the central arch, the squinches redirects the outward thrust of the dome downward, creating stability. Each squinch and corner are also richly decorated with vegetal scrolls, circles, and rectilinear arrangements of bricks. A small circle appears in the spandrels above each squinch, echoing the decoration above each entrance into the tomb and in the arcade that runs along the top of the exterior.

The only inscription associated with the building was discovered on a wooden lintel over the eastern door in the 1930s. A Soviet scholar interpreted the inscription as including the name, “Nasr b. Ahmad b. Ismail,” and so some scholars dated the building to the reign of Nasr II (914–43). However, popular memory and the sixteenth-century copy of a tenth-century waqf document (which discusses the foundation of a charitable organization) has led other scholars to attribute the building to his grandfather, Ismail, the founder of the dynasty, who may have built it for his father, Nasr I. The remains of three unidentified male bodies were also found in the mausoleum in the 1930s.

Baked bricks: an innovation in design and technology 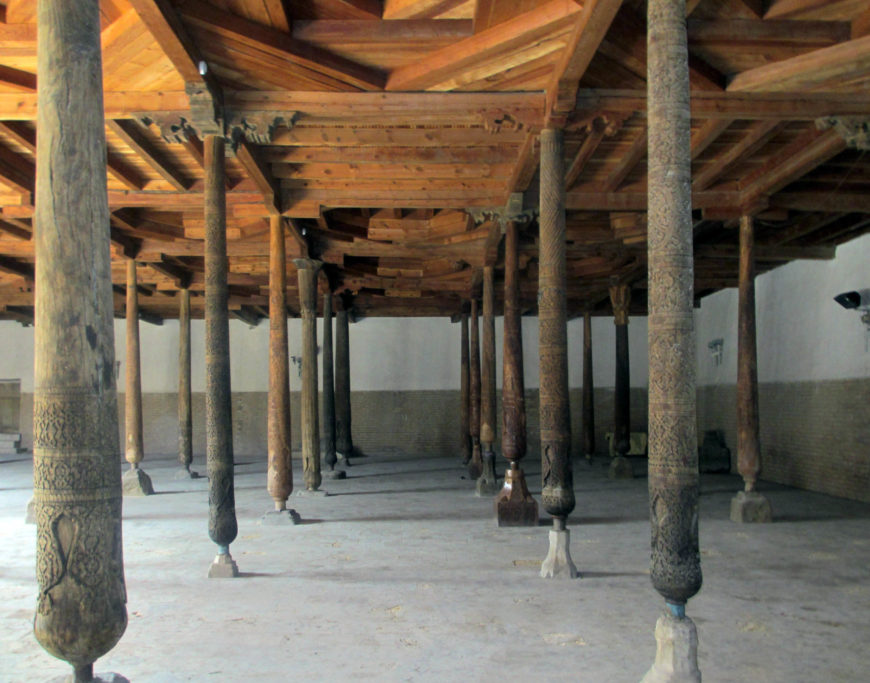 The Samanid mausoleum was innovative, because it used baked brick to an unprecedented degree. Previous to this, most important buildings—palaces and temples—in the region had been built of unbaked brick and covered with stucco. Wood had also been employed, especially for columns, as in the Friday mosque in Khiva (another city in modern-day Uzbekistan).

Baked brick was more expensive—so its use signifies that a building was important. Most of the region’s later monuments are constructed using baked bricks and colorful tiles (including a range of brilliant blues that have become famous), such as the Shah-i-Zinda mausoleum complex mentioned earlier. The Samanid Mausoleum is the earliest example of a tomb made of baked brick; however, considering how well built it was, as well as how complex the decorative patterns of brick were, there was likely a much longer, now lost tradition of brickwork and tombs. The intricate decorative details and brickwork also demonstrate that this tomb, which fused Persian and local traditions, was a monument to the reigning Samanid Dynasty and for its new, thriving capital of Bukhara—and was one of the great architectural masterpieces of Central Asia from the early tenth century.